The real story behind penicillin

The discovery of penicillin, one of the world’s first antibiotics, marks a true turning point in human history — when doctors finally had a tool that could completely cure their patients of deadly infectious diseases.

Many school children can recite the basics. Penicillin was discovered in London in September of 1928. As the story goes, Dr. Alexander Fleming, the bacteriologist on duty at St. Mary’s Hospital, returned from a summer vacation in Scotland to find a messy lab bench and a good deal more.

Upon examining some colonies of Staphylococcus aureus, Dr. Fleming noted that a mold called Penicillium notatum had contaminated his Petri dishes. After carefully placing the dishes under his microscope, he was amazed to find that the mold prevented the normal growth of the staphylococci. 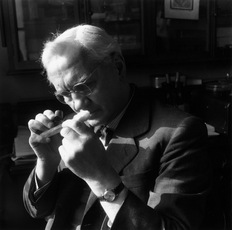 It took Fleming a few more weeks to grow enough of the persnickety mold so that he was able to confirm his findings. His conclusions turned out to be phenomenal: there was some factor in the Penicillium mold that not only inhibited the growth of the bacteria but, more important, might be harnessed to combat infectious diseases.

As Dr. Fleming famously wrote about that red-letter date: “When I woke up just after dawn on September 28, 1928, I certainly didn’t plan to revolutionize all medicine by discovering the world’s first antibiotic, or bacteria killer. But I guess that was exactly what I did.”

Fourteen years later, in March 1942, Anne Miller became the first civilian patient to be successfully treated with penicillin, lying near death at New Haven Hospital in Connecticut, after miscarrying and developing an infection that led to blood poisoning.

But there is much more to this historic sequence of events.

Actually, Fleming had neither the laboratory resources at St. Mary’s nor the chemistry background to take the next giant steps of isolating the active ingredient of the penicillium mold juice, purifying it, figuring out which germs it was effective against, and how to use it. That task fell to Dr. Howard Florey, a professor of pathology who was director of the Sir William Dunn School of Pathology at Oxford University. He was a master at extracting research grants from tight-fisted bureaucrats and an absolute wizard at administering a large laboratory filled with talented but quirky scientists.

This landmark work began in 1938 when Florey, who had long been interested in the ways that bacteria and mold naturally kill each other, came across Fleming’s paper on the penicillium mold while leafing through some back issues of The British Journal of Experimental Pathology. Soon after, Florey and his colleagues assembled in his well-stocked laboratory. They decided to unravel the science beneath what Fleming called penicillium’s ”antibacterial action.” 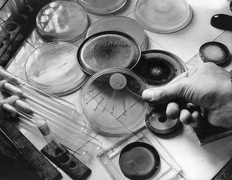 A petri-dish of penicillin showing its inhibitory effect on some bacteria but not on others. Photo by Keystone Features/Getty Images.

One of Florey’s brightest employees was a biochemist, Dr. Ernst Chain, a Jewish German émigré. Chain was an abrupt, abrasive and acutely sensitive man who fought constantly with Florey over who deserved credit for developing penicillin. Despite their battles, they produced a series of crude penicillium-mold culture fluid extracts.

During the summer of 1940, their experiments centered on a group of 50 mice that they had infected with deadly streptococcus. Half the mice died miserable deaths from overwhelming sepsis. The others, which received penicillin injections, survived.

It was at that point that Florey realized that he had enough promising information to test the drug on people. But the problem remained: how to produce enough pure penicillin to treat people. In spite of efforts to increase the yield from the mold cultures, it took 2,000 liters of mold culture fluid to obtain enough pure penicillin to treat a single case of sepsis in a person.

In September 1940, an Oxford police constable, Albert Alexander, 48, provided the first test case. Alexander nicked his face working in his rose garden. The scratch, infected with streptococci and staphylococci, spread to his eyes and scalp. Although Alexander was admitted to the Radcliffe Infirmary and treated with doses of sulfa drugs, the infection worsened and resulted in smoldering abscesses in the eye, lungs and shoulder. Florey and Chain heard about the horrible case at high table one evening and, immediately, asked the Radcliffe physicians if they could try their ”purified” penicillin.

After five days of injections, Alexander began to recover. But Chain and Florey did not have enough pure penicillin to eradicate the infection, and Alexander ultimately died. 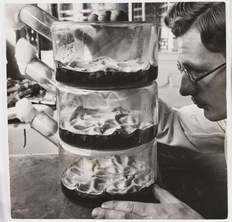 A laboratory technician examining flasks of penicillin culture, taken by James Jarche for Illustrated magazine in 1943.

Another vital figure in the lab was a biochemist, Dr. Norman Heatley, who used every available container, bottle and bedpan to grow vats of the penicillin mold, suction off the fluid and develop ways to purify the antibiotic. The makeshift mold factory he put together was about as far removed as one could get from the enormous fermentation tanks and sophisticated chemical engineering that characterize modern antibiotic production today.

In the summer of 1941, shortly before the United States entered World War II, Florey and Heatley flew to the United States, where they worked with American scientists in Peoria, Ill., to develop a means of mass producing what became known as the wonder drug.

One hot summer day, a laboratory assistant, Mary Hunt, arrived with a cantaloupe that she had picked up at the market and that was covered with a ”pretty, golden mold.” Serendipitously, the mold turned out to be the fungus Penicillium chrysogeum, and it yielded 200 times the amount of penicillin as the species that Fleming had described. Yet even that species required enhancing with mutation-causing X-rays and filtration, ultimately producing 1,000 times as much penicillin as the first batches from Penicillium notatum.

In the war, penicillin proved its mettle. Throughout history, the major killer in wars had been infection rather than battle injuries. In World War I, the death rate from bacterial pneumonia was 18 percent; in World War II, it fell, to less than 1 percent. 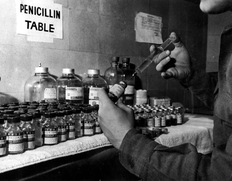 This is the penicillin table in a U.S. evacuation hospital in Luxembourg in 1945. Photo by Photo12/UIG.

From January to May in 1942, 400 million units of pure penicillin were manufactured. By the end of the war, American pharmaceutical companies were producing 650 billion units a month.

Ironically, Fleming did little work on penicillin after his initial observations in 1928. Beginning in 1941, after news reporters began to cover the early trials of the antibiotic on people, the unprepossessing and gentle Fleming was lionized as the discoverer of penicillin. And much to the quiet consternation of Florey, the Oxford group’s contributions were virtually ignored.

That problem was partially corrected in 1945, when Fleming, Florey, and Chain — but not Heatley — were awarded the Nobel Prize in Physiology or Medicine. In his acceptance speech, Fleming presciently warned that the overuse of penicillin might lead to bacterial resistance.

In 1990, Oxford made up for the Nobel committee’s oversight by awarding Heatley the first honorary doctorate of medicine in its 800-year history.

Maybe this September 28, as we celebrate Alexander Fleming’s great accomplishment, we will recall that penicillin also required the midwifery of Florey, Chain and Heatley, as well as an army of laboratory workers.

Left: In a monthly column for PBS NewsHour, Dr. Howard Markel revisits moments that changed the course of modern medicine on their anniversaries, like the development of penicillin on Sept. 28, 1928. Above: Jean-Claude Fide is treated with penicillin by his mother in 1948. Photo by Bert Hardy/Picture Post