Type the terms “#thinspiration,” “#thinspo” or “#ana” into various social media networks, and a disturbing underground world comes into focus. Images of emaciated legs and protruding ribs are flanked by words like “starving for perfection” and drastic tips to drop weight. Combined, they reveal a troubling movement that advocates eating disorders.

In response, those networks made efforts to ban content tagged with the related terms. Both Instagram and Tumblr implemented new guidelines that prohibit content that “promotes or glorifies self-harm,” along with advisory pop-up notifications that direct people to websites where they can find help.

But the posts haven’t stopped. And don’t expect them to anytime soon.

The so-called “pro-ana” and “pro-mia” websites have been around for years. Social media just makes the world easier to access. What’s more, social media users quickly found ways to sidestep the networks’ new guidelines by creating alternative search words to tag the content.

According to the National Eating Disorders Association, 20 million women and 10 million men suffer from an eating disorder at some point in their life. It’s natural to turn to social media — a 24/7 community — to talk about their struggles. But it’s not uncommon for comments in those posts to encourage starvation and purging rather than caution against such behavior.

How do you block out these harmful messages? The National Eating Disorders Association — the group that advises Tumblr and Facebook on how to manage this type of content — aims to combat the problem by using social media to fuel positive support and to focus on early intervention in the lives of young people, when anxieties are most impressionable.

Proud2BMe.org, an online community connected with the association, tries to reach these young people before they find such content. 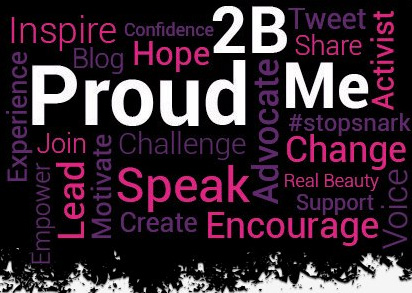 “Many young people I work with talk about social media having a negative impact on their body and recovery because it is so comparison-based,” said Claire Mysko, a project consultant for Proud2BMe.

James — an 18-year-old high school senior from Philadelphia and a member of NewsHour’s Student Reporting Labs team — suffered from depression when he was younger, due in part, he said, from his difficulty accepting himself “as a dark-skinned African-American.” During that time, he said he didn’t eat regularly and was plagued with suicidal thoughts. Though he’s found support and more happiness since, social media can still trigger his feelings of insecurity.

Leaving your house no longer means leaving the online world behind. And the self-doubt, envy and inadequacy often sparked by the comments and photos of strangers and “friends” is harder to escape. For adults, these feelings sting. But for young people, the wounds can cut deeper.

“One of the root issues of eating disorders is perfection and people-pleasing,” Mysko said. These are desires that mirror that need for “likes,” “favorites” and approval on social media.

Proud2BMe aims to rally young people in support of all kinds of healthy bodies. For example, one of their main initiatives, led last year by 19-year-old Benjamin O’Keefe, Proud2BMe’s “teenage ambassador,” resulted in Abercrombie and Fitch’s expansion of clothing sizes.

After reading a 2006 Business Insider article where Abercrombie and Fitch CEO Michael Jeffries said the company goes “after the cool kids,” O’Keefe — who suffers from anorexia — started a Change.org petition that challenged the company to expand their size selection. Proud2BMe teamed up with O’Keefe and after a meeting with Abercrombie and Fitch, the company officially began carrying plus-sizes in November 2013.

“It was incredible to see that my voice and my story could create a narrative of change and start a really big movement across the world,” O’Keefe said.

Ultimately, if the bad advice is loud, the good advice — like this message from James — must speak louder:

NEDAwareness Week ends Sunday. If you or someone you know is suffering from an eating disorder, NEDA can be reached online and by phone at 1-800-931-2237.

Left: A #thinspiration search on Tumblr pulls up images connected to anorexia and bulimia.