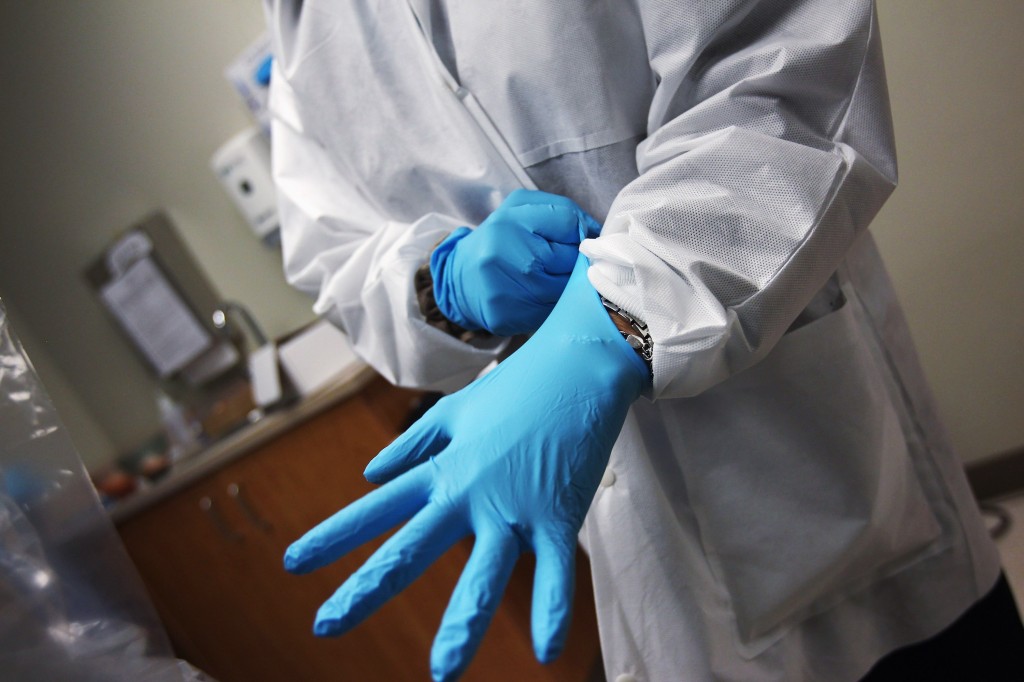 AURORA, CO – MARCH 27: Jonathan Orejel holds his son Jonathan Saul Orejel, six-weeks-old, while at a community health center on March 27, 2012 in Aurora, Colorado. The center, called the Metro Community Provider Network, has received some 6,000 more Medicaid eligable patients since the healthcare reform law was passed in 2010. Expansion of such clinics nationwide is considered key to serving the millions more patients set to be be covered by Medicaid if the healthcare reform passes the current challenge in the Supreme Court. Preventative health services and treatments at community health centers are also designed to reduce emergency room expenditures, which are up to 10 times more costly. (Photo by John Moore/Getty Images)

While not addressing Medicare’s long term financial problems, the budget targets the much smaller Children’s Health Insurance Program, or CHIP. And Trump’s Medicaid cuts appear even bigger than those in the health care bill recently passed by House Republicans, above what would be needed to fulfill the GOP vow to repeal “Obamacare.”

Both safety net programs are federal-state collaborations, and such cuts would leave states with hard choices: spend more of their own money; restrict enrollment; cut benefits, or reduce payments to hospitals and doctors.

“If states get fewer dollars from the federal government, there are only so many options, because states have to balance the budget every year,” said Elizabeth Carpenter, a health policy expert with the consulting firm Avalare Health.

Trump’s budget was silent on bargaining with the pharmaceutical industry to reduce the cost of prescription drugs, a topic the president has often touched on. But the budget repeated Trump’s previous proposals for double-digit percentage cuts to the National Institutes of Health and the Centers for Disease Control and Prevention, considered nonstarters even by Republican lawmakers.

The trillion-dollar-plus Department of Health and Human Services, whose programs cover more than 130 million people, did not hold its customary budget briefing on Tuesday. From Europe where he is attending a world health conference, HHS Secretary Tom Price released a statement that said the budget “outlines a clear path toward fiscal responsibility by creating efficiencies that both improve services and save money.”

As a candidate and as president Trump has frequently talked about making health care more affordable for regular folks, including by lowering premiums and deductibles. He promised not to cut Medicare, and initially, Medicaid as well. But to some experts, Trump’s budget looks more like a cost shift from the federal government to the states and to people now benefiting from coverage expansions in the Obama years.

“I think it will be challenging for states to try to figure out what to do,” said Trish Riley, executive director of the nonpartisan National Academy for State Health Policy, which advises states.

Coverage for children previously had not figured as a major issue for the administration, which separately is calling for paid parental leave. The CHIP health program covers about 7 million children, and traditionally enjoyed bipartisan support. While Trump’s budget would extend CHIP for another two years, it would also cut $5.8 billion.

“It’s a big impact,” said Riley. States would receive significantly lower overall payments from the federal government, and Washington would no longer match state spending on coverage for kids whose families make more than two-and-a-half times the federal poverty level, about $51,000 for a family of three.

More than half the states now cover children above the administration’s proposed cutoff, Riley said. Administration officials say that the limitation proposed in the budget would focus taxpayer money on families who need it the most.

Trump’s budget would squeeze additional savings beyond that, but congressional aides say how much is not exactly clear. White House Budget Director Mick Mulvaney has indicated that the budget uses a lower growth rate for the federal government’s share of future Medicaid spending.

“The Trump budget assumes hundreds of billions more in Medicaid cuts than the House bill,” said Edwin Park, a health policy expert with the Center on Budget and Policy Priorities, which advocates for low-income people.

On Capitol Hill, Trump’s budget won polite praise from some Republicans, but Democrats were dismissive. “This is the budget you write if you think working families have it too easy,” said Sen. Ron Wyden of Oregon, ranking Democrat on the committee that oversees health care financing.