Monday on the NewsHour, Ray Suarez reports on the lack of mental health services in Indonesia. Learn more about the problem in the Aceh region of Indonesia in the post below. 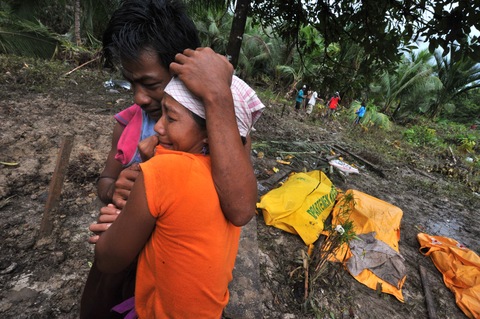 Survivors mourn the dead after a large tsunami hit Indonesia. Photo by AFP/Getty.

The December 2004 tsunami that killed more than 200,000 and wiped-out thousands of communities on the shores of the Indian Ocean was especially devastating to the people of Aceh, Indonesia.

A province on the northern tip of Sumatra island, Aceh was the point of land closest to the earthquake epicenter, and had the highest concentration of deaths in the region — around 170,000 people. Entire families were killed. Parents had children swept out of their arms; the loss of life and property was staggering and deeply traumatic for all those who survived.

But what few outsiders realized was that when the giant surges of water came to shore, the people of Aceh had been enduring trauma of a different kind for over three decades.

The region had been enveloped in a bloody civil war between the “Free Aceh Movement” and the Indonesian government. According to Harvard medical anthropologist Byron Good, many people affected by the war were already suffering from a variety of mental health problems.

“If you live through 20 years of violence, have been tortured or had to watch family members tortured, in those settings its not surprising that statistically levels of mental illness increase,” said Good. “Depression, anxiety, psychosis, and PTSD increase. Those things were present in the high-combat areas in Aceh.”

Despite the need for mental health care in the region prior to the tsunami, Good says there was little government funding for programs. There was one mental health facility in the capital city of Banda Aceh and four full-time psychiatrists for a population of four million. A bad situation got even worse when the tsunami struck; the Aceh Psychiatric Hospital was damaged, and many of its roughly 300 patients wandered off in the ensuing chaos.

Health experts say that grieving and emotional distress is normal after such a natural disaster and most people recover without any lingering mental health issues. But for some, psychological problems can persist for months, even years. While the exact numbers of people who suffered from mental illnesses after the tsunami are difficult to determine, the World Health Organization estimates that the prevalence of mild and moderate mental disorders in the general population is about 10 percent, and that can increase to 20 percent after a disaster.

More severe mental health problems can affect 2 to 3 percent of the population normally and increase to 3 to 4 percent after a disaster.

In the days and months following the tsunami, financial donations from around the world began pouring into Indonesia and other hard-hit countries, and mental health care for victims quickly became a top priority. The Norwegian government spent close to $2 million to rebuild and expand the mental health hospital. Aid groups like Save the Children and Northwest Medical Teams organized art therapy activities for children. Hand puppets were used by a local organization to encourage children to talk about their experiences. And a variety of organizations offered direct mental health counseling and treatment to adults suffering from a host of ailments ranging from depression to psychosis.

But according Dr. Pandu Setiawan, former director of mental health in Indonesia during the tsunami, the most significant program was the training of hundreds of local nurses to do community outreach and to look for people suffering from mental illness.

“We realized we didn’t have a mental health system at all when the tsunami happened so we needed a new model,” said Setiawan. “We didn’t want the focus to be on the mental health hospital. We wanted to reach people on the community level so we trained general health nurses to work with survivors on the village level.”

Those specially trained nurses referred people who were suffering from significant mental health problems, and who needed medicines, to general practitioner doctors who were also given intensive mental health training.

Despite all the attention placed on mental health care following the tsunami, Harvard’s Byron Good says funding has largely dried up in the last few years and he places much of the blame on outside aid organizations.

“Humanitarian agencies often talk about moving from immediate disaster stabilization, which they are often very good at, to an intermediate stage providing longer term shelter to people, and then to a third stage of development which they turn over to someone else,” said Good.

“In areas like mental health care, which is not a high priority for development agencies, that third stage of somehow passing it along to someone else is seldom really done.”