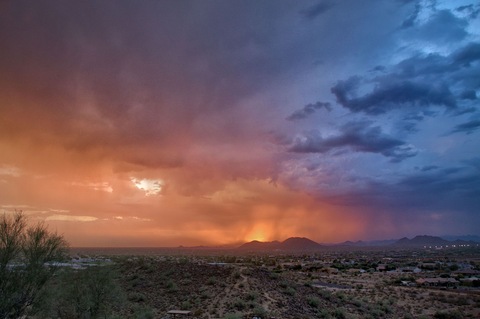 Valley fever is on the rise in the southwestern United States, including Arizona’s Sonoran Desert. Photo courtesy of Flickr user Are W.

It was a Thursday morning in March that Al Rountree called his boss to say he was too exhausted to make it to work. Thinking rest would help, Rountree went back to bed and slept the entire day. The next morning, he woke up even more exhausted, and the pattern continued through the week.

“Each day, I got more and more tired,” he said. “I could hardly make it to the bathroom.” Within 10 days, Rountree was in a local hospital on a breathing machine.

The Bakersfield, Calif., resident had valley fever, a lung infection brought on by inhaling a microscopic fungus called Coccidioides. Like most people with valley fever, Rountree, 62, has no idea where he inhaled the fungus.

Living in an area of California that is dry and dusty, particularly after years of drought, Rountree could have breathed it in anywhere around town. Valley fever is not contagious. Only about half those who inhale the fungus will even get sick. Sickness can range from flu-like symptoms, to severe pneumonia, to death.

The disease is not new to residents in the desert areas of Arizona and California, particularly those who work outside and are exposed to desert dust. But according to the Centers for Disease Control and Prevention, valley fever cases in endemic areas are dramatically on the rise — from 2,265 in 1998 to 22,401 in 2011. Since 1990, more than 3,000 people have died.

Many in the general public and even in the medical community know very little about the illness. The lack of knowledge can delay diagnosis and treatment.

On Wednesday’s PBS NewsHour broadcast, senior correspondent Ray Suarez reports from California, where NASA scientists are looking into the role of climate change in the recent jump in valley fever cases. Suarez also visits with Dr. Royce Johnson, of Bakersfield, Calif. Johnson is one of the leading infectious disease experts on valley fever. Tune in for the full report.

In the meantime, the Centers for Disease Control and Prevention says there are 10 things you should know about valley fever. Read the full list below.

10 Things You Should Know About Valley Fever, According to the CDC

1. Valley fever is caused by a fungus that lives in the environment.

There are an estimated 1.5 million species of fungi on Earth, but only about 300 of them can make people sick. Valley fever is a respiratory disease caused by a fungus called Coccidioides. Valley fever is becoming increasingly common, and it can be debilitating and costly. Nearly three-quarters of valley fever patients miss work or school because of their illness, for an average of two weeks, and more than a third of patients need to receive care in the hospital.

The fungus Coccidioides lives in soil and dust in the southwestern United States and parts of Mexico, Central America, and South America. People get valley fever by breathing in the microscopic, airborne fungal spores. Sometimes, the number of people who get valley fever increases after there have been weather-related events that stir up more dust than usual, such as earthquakes or dust storms.

2. Valley fever is not contagious.

Valley fever does not generally spread between people.

3. Symptoms of valley fever are usually similar to the flu.

Approximately 40 percent of people who get the fungal infection do not show any symptoms. In the other 60 percent, valley fever can cause flu-like symptoms, including:

The symptoms of valley fever typically appear between one and three weeks after someone inhales the fungal spores. In many people, the symptoms will disappear in a few weeks. However, in severe cases, the infection can cause chronic pneumonia, and the symptoms can last for years.

In less than 1 percent of people who get valley fever, the infection can spread from the lungs to the rest of the body, causing meningitis (spine and brain infection) or infection in the bones and joints.

4. Valley fever is common in the southwestern United States.

Studies have shown that in some areas where valley fever is very common, such as southern Arizona, valley fever causes an estimated 15 percent to nearly 30 percent of all community-acquired pneumonias, but that less than 15 percent of patients with pneumonia symptoms are tested for valley fever. This suggests that there may be many more people with the disease than are reported.

Some researchers estimate that each year the fungus infects thousands more people, many of whom are sick without knowing the cause or have mild cases that aren’t detected. In 2011, the most recent year for which there is data, more than 20,000 cases of valley fever were reported in the United States, and cases increased by about 15 percent each year from 1998 to 2011. Some researchers hypothesize that many milder cases go undiagnosed, which may mean that the reported cases are just the tip of the iceberg.

The increase could be because of:

6. Anyone can get valley fever.

Anyone can get valley fever if they live in or have visited an area where the fungus Coccidioides lives, especially southern Arizona or California’s Central Valley. Although people of any age can get valley fever, it is most common among older adults, particularly those ages 60 and older. People who have recently moved to an area where the disease naturally occurs are at higher risk for infection.

7. Some people are at higher risk for developing the severe form of valley fever.

Groups of people who are more likely to develop the severe form of valley fever or develop an infection that spreads beyond the lungs include:

The reasons why some racial groups are at higher risk are not completely understood but may have to do with genetics.

8. Some people will need antifungal treatment.

In some people who get valley fever, the infection will go away on its own in a few weeks. However, antifungal treatment is recommended for certain patient groups, such as those at high risk for developing the severe forms of the disease. Because the symptoms of valley fever can be similar to those of other respiratory diseases, patients often experience delays in getting tested and receiving treatment, if they need it. However, early diagnosis can:

9. It can be difficult to avoid the fungus that causes valley fever.

In areas where valley fever is common, it’s difficult to completely avoid exposure to the fungus that causes valley fever. There is no vaccine to prevent the infection, although researchers are working to develop a vaccine. People with weak immune systems or who are at high risk for developing the severe form of the disease for another reason should consider trying to reduce their exposure to the fungus by limiting activities that disturb soil or generate dust, such as digging or excavation, in areas where the fungus lives.

More awareness about valley fever among the general community and among healthcare providers is needed. Increased awareness could help avoid missed diagnoses. For example, one study showed that valley fever patients who knew about the disease before visiting a doctor were more likely to ask to be tested and were diagnosed sooner than patients who didn’t know about the disease.