LYNCHBURG, Va. — A few months ago, if you lived in Virginia, relied on Medicaid, and were seeking a residential treatment program for substance abuse, you had few to choose from. To be precise, you had four.

That increase was made possible in part by a new type of “waiver” from federal rules that has dramatically expanded treatment options for Medicaid beneficiaries here. It has also shed light on the ways in which, in much of the country, the program has limited opportunities for many people seeking help overcoming addictions.

Medicaid, the joint federal-state program for people with low incomes, pays for about a quarter of all substance abuse treatment. But, advocates and providers say, arcane policies baked into the program, some since its inception in 1965, have restricted the services available to beneficiaries — a particularly vexing issue at a time of a national opioid epidemic.

READ NEXT: As opioid crisis flares, naturopaths and chiropractors lobby for bigger roles in treating pain

Among the rules: One that prohibits facilities that treat mental illness or substance use disorder from receiving federal Medicaid dollars if they have more than 16 beds. That rule means providers have a financial disincentive from serving more clients.

States are now seeking ways to scooch around such limitations by applying for the federal waivers, first made available in 2015, that provide funding for additional addiction services not otherwise covered by Medicaid.

Virginia is the fourth state to receive a waiver, after California, Massachusetts, and Maryland, and most of the new services went into effect last month.

State officials have seen a profound response. Before Virginia obtained its waiver, there wasn’t a single provider in the state that accepted Medicaid and offered a type of combined counseling and medication-assisted treatment. Now there are 28, with more expected.

“These policy changes have allowed us to provide a continuum of care that currently does not exist in Virginia,” said Damien Cabezas, the CEO of Horizon Behavioral Health, an addiction and mental illness provider here in Lynchburg. 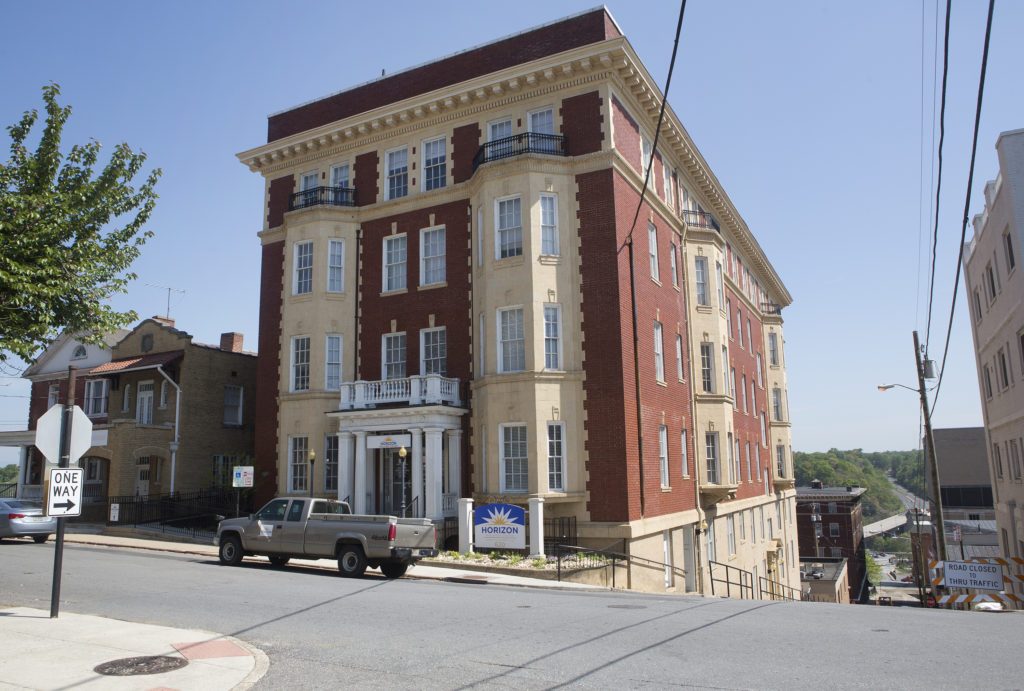 In Virginia, up to 200,000 of the state’s 1.1 million Medicaid beneficiaries have a substance use disorder, and fatal opioid overdoses doubled from 2010 to 2016. It was the growing opioid epidemic that stirred federal Medicaid officials to take action and widen access to care.

“You didn’t have to look very far to see the problem of opioid abuse in the United States,” said Vikki Wachino, a top Medicaid official in the Obama administration.

Trump administration officials have indicated they will keep offering the waivers. And states interested in obtaining one are looking to Virginia as an example.

Virginia first acted on its own, seeking to show federal officials it could provide a full spectrum of care if it was awarded a waiver. It enacted a new treatment benefit, estimated to cost about $16 million in its first year, that extended coverage of residential programs and inpatient detox to all Medicaid beneficiaries, not just people under 21 and, for some services, pregnant women. Before the change, most adults on Medicaid were ineligible for such services.

The benefit boosted the payments providers receive for those services — increases of up to 400 percent in some cases — to create a financial motive to open new programs. It also provided coverage for peer support for both mental health and substance use disorders, which can aid recovery.

With the benefit enacted by the state, the federal government then approved the waiver, agreeing to fund its share of the program.

Since many changes went into effect April 1, drug treatment centers have been launching new programs. And while the additional services were driven by Medicaid policy changes, they, in many cases, are also being offered to people with other forms of insurance and, to an extent, the uninsured.

“Medicaid has really been a catalyst for providers to develop new programs and accept any Virginian, not just Medicaid beneficiaries,” said Dr. Katherine Neuhausen, the chief medical officer of Virginia’s Medicaid program.

Here in Lynchburg, Horizon Behavioral Health has been able to double the number of beds it has available for detox and crisis stabilization from 16 to 32 because of the policy changes. The boost in reimbursement rates also pushed it to reopen its Suboxone clinic, which it had previously shut down because the payments it used to receive didn’t cover the cost of the medication and the doctor’s time.

READ NEXT: This company hopes to make opioid addiction treatment for home use

A few minutes away from the detox facility is Horizon’s new residential home for women, which opened Monday.

On a recent day, the home, where women will be able to stay for about 30 days, had six freshly made beds ready for the first group of clients. The living room, with its robin’s-egg blue walls, had a collection of board games and mystery novels, and out front, rocking chairs sat on the front porch, overlooking a garden waiting to be tended.

Residential programs weren’t financially feasible before, said Cabezas, the CEO, but now Horizon has plans to open another home for men and one where women in recovery can bring their children to live with them.

“Generally people that received, let’s say detoxification services, their only option after being discharged was an outpatient setting. And oftentimes people with addiction need a more structured setting,” Cabezas said.

The prohibition on funding facilities with 16 or more beds stems from when the government did not want federal Medicaid dollars going to state psychiatric hospitals. Beyond offering the waivers, federal Medicaid officials last year issued a new rule that allowed some Medicaid programs to cover stays of up to 15 days at larger facilities.

The policy changes are geared to help providers offer a variety of services and still be reimbursed. Lindsey Browning, a program director at the National Association of Medicaid Directors, said people with substance use disorder need different levels of care, whether it’s outpatient or inpatient detox services or a weekly therapy session.

“The Medicaid program should be able to address all those needs,” she said. 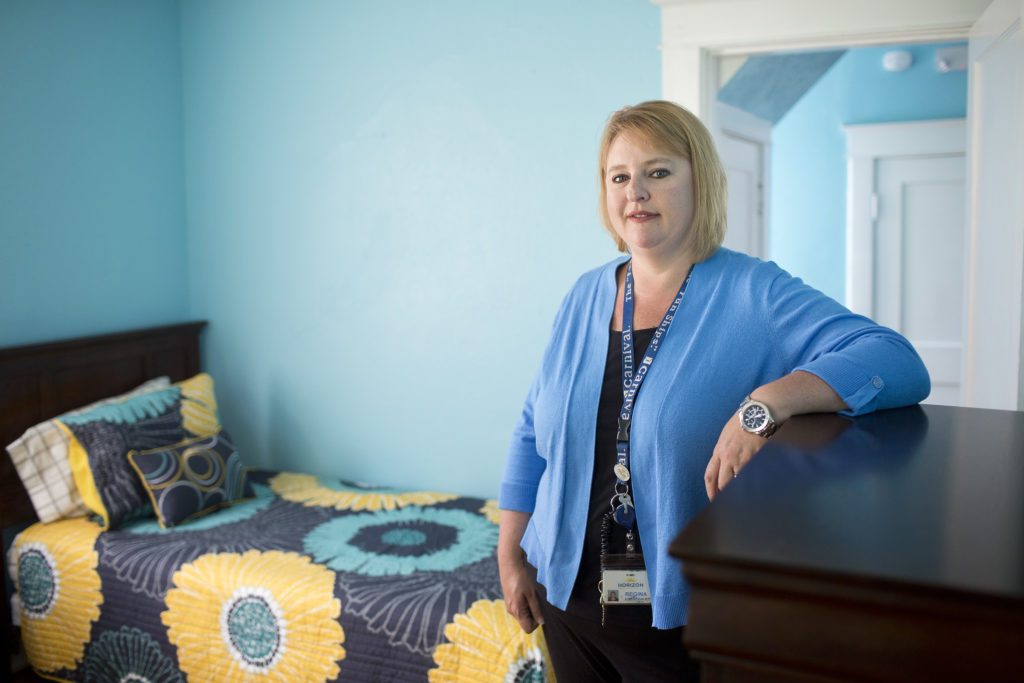 Regina Fitzgerald will be the program manager for the new women’s residential program on Denver Ave. Erica Yoon for STAT

Some advocates have pushed Congress to revise Medicaid law itself and eliminate the restrictions on substance use treatment. They argue that the new avenues opened up by the waivers and the rules change can only do so much — the rules that pay for 15-day stays at facilities, for example, only apply to some Medicaid plans.

But there are two concerns. One is cost: Estimates for eliminating the restrictions on facilities treating substance use and mental illness have put the price tag at more than $40 billion over a decade. The other is that it could lead to the re-institutionalization of treating mental illness, which has largely moved to community settings. That’s why officials capped the length of stay Medicaid would pay for at 15 days when they revised the rules last year.

At Horizon’s residential programs, staff will help residents, many of whom are homeless, find jobs and locate stable housing for when they leave. The hope is that an additional 30 days of intensive counseling and care will reduce their chances of relapse and connect them with services for their recovery beyond their stays.

“A lot of these individuals come back through the doors because they don’t have enough time,” said Regina Fitzgerald, the program manager for the residential program. “We’ll have time to get them there.”

This article is reproduced with permission from STAT. It was first published on May 3, 2017. Find the original story here.

Left: A view from the activity room at Horizon Behavioral Health in Lynchburg, Va. Photo by Erica Yoon/STAT