We’ve lost one of the clearest voices on health care, Uwe Reinhardt

All journalists have a list of experts they can call to explain complicated theories and policies, but few if any could explain things as clearly and with such distinct humor as Uwe Reinhardt.

When news broke this week of Reinhardt’s death at the age of 80, it quickly reminded us of just how important and valuable Uwe had been to so many over the years. Friends and colleagues began tweeting memories of how Reinhardt had helped them, and how Uwe (pronounced OO-va) tried to change the thinking and conversation around health care in this country.

Reinhardt was sober enough to understand the country’s political and economic realities, and resolute enough to leave cynicism at the door.

For many years, Reinhardt was an occasional guest on our program (and a number of others). And when I (or my colleagues) brought Reinhardt on as part of a panel on the show, it meant we were going for the big guns, intellectually. We called him when we needed a thinker to weigh in on the health care conundrums of the time; someone who was pressing for a higher aspiration for the country, yet was sober enough to understand its political and economic realities, and resolute enough to leave cynicism at the door.

Uwe, who wrote prolifically and served as an advisor to many government agencies, seemed to be all of that and more.

I was not especially close to Uwe, but our experiences at the program over the years march right in sync with the high praise you read elsewhere, including in these tributes. He would make the case for a fairer system that would cover more of the uninsured. He’d extol the virtues of the German system where he had grown up. He spent a considerable amount of his time breaking down why American prices were so high for health care and highlighted the lack of transparency around them.

All the while, he was extraordinarily patient and generous with his time. I think it’s safe to say this professor from the Woodrow Wilson School at Princeton University enjoyed teaching to journalists, too. Hospital readmissions? Sure, Uwe could break that down for you — or, lay out the folly, as he saw it, of the employer-based insurance system in America and its origins. All the while, he would punctuate a point with dry and sometimes acerbic humor. 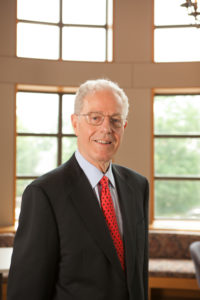 Uwe Reinhardt spent a considerable amount of his time breaking down why American prices were so high for health care and highlighted the lack of transparency around them. Photo courtesy of Princeton University, Office of Communications, Brian Wilson.

His opinions and commentary were not limited to health care. During the Iraq and Afghanistan wars, he spoke eloquently and wrote passionately about the small percentage of Americans fully appreciating the burdens of the military on those who served and their families. He was among them; his son, a Marine, was wounded in Iraq. In this op-ed in the Washington Post in 2005, he wrote about why, he thought, “the general public is so noticeably indifferent to the plight of our troops and their families.”

Several writers, experts and leaders have described Uwe as a powerful voice who served as a kind of conscience about how the American health care system operated, who it left behind and what it could strive to be. He articulated those views elegantly during the debate over “Hillarycare” in the early 1990s. And in an era before “Obamacare” became a much-debated reality and example of our polarized politics, Reinhardt never lost sight of his hopes and goals, or his gentle and civil tone.

We were grateful that he brought his insights to our viewers, too.

Above: Uwe Reinhardt, seen here early in his career at Princeton University, was a leading voice on health care economics. Photo courtesy of the Woodrow Wilson School of Public and International Affairs.