When Ludwig van Beethoven’s magisterial 9th Symphony premiered in 1824, the composer had to be turned around to see the audience cheering — he could not hear the audience’s rapturous applause.

Beethoven first noticed difficulties with his hearing decades earlier, sometime in 1798, when he was about 28. By the time he was 44 or 45, he was totally deaf and unable to converse unless he passed written notes back and forth to his colleagues, visitors and friends. He died in 1827 at the age of 56. But since his death, he remains as just relevant and important to Western culture — if not more so.

What caused Beethoven’s deafness? It is a query that has carried many diagnoses over the last 200 years, from tertiary syphilis, heavy metal poisoning, lupus, typhus fever to sarcoidosis and Paget’s disease.

Beethoven was baptized on this day in 1770 (no one is absolutely certain of his birthdate, although it is probably Dec. 16), making him 249 today.

Like many men of the late 18th and early 19th centuries, he suffered from a plethora of other illnesses and ailments.

Like many men of the late 18th and early 19th centuries, he suffered from a plethora of other illnesses and ailments. In Beethoven’s case, the list included chronic abdominal pain and diarrhea that might have been due to an inflammatory bowel disorder, depression, alcohol abuse, respiratory problems, joint pain, eye inflammation, and cirrhosis of the liver. This last problem, given his prodigious drinking, may have been the final domino that toppled him into the grave. Bedridden for months, he died in 1827, most likely from liver and kidney failure, peritonitis, abdominal ascites, and encephalopathy. An autopsy revealed severe cirrhosis and dilatation of the auditory and other related nerves in the ear.

A young musician named Ferdinand Hiller snipped off a lock of hair from the great composer’s head as a keepsake — a common custom at the time. The lock stayed within the Hiller family for nearly a century before somehow making its way to the tiny fishing village of Gilleleje, in Nazi-controlled Denmark and into the hands of the local physician there, Kay Fremming. The doctor helped save the lives of hundreds of Jews escaping Denmark and the Nazis for Sweden, which was about 10 miles across the Øresund Strait, the narrow channel separating the two nations. The theory is that one of these Jewish refugees, perhaps a relative of Ferdinand Hiller, either gave Dr. Fremming the lock of Beethoven’s hair or used it as a payment of some kind.

At any rate, the doctor bequeathed the lock, consisting of 582 strands, to his daughter, who subsequently put it up for auction in 1994. It was purchased by an Arizona urologist named Alfredo Guevera for about $7,000. Guevera kept 160 strands. The remaining 422 strands were donated to the Ira F. Brilliant Center for Beethoven Studies at San Jose State University in California.

Guevera and Ira Brilliant, a real estate developer, collector and university benefactor, then pursued the question of how Beethoven became deaf.

They put the brown, gray and white strands through a number of imaging, DNA, chemical, forensic and toxicology tests. There was no trace of morphine, mercury or arsenic but there was an abnormally elevated lead level, potentially indicating chronic lead poisoning, which could have caused Beethoven’s deafness, even though it does not explain his multiple other disorders. Further studies suggest he probably drank from a goblet containing lead. It should also be noted that wine of that era often contained lead as a sweetener. 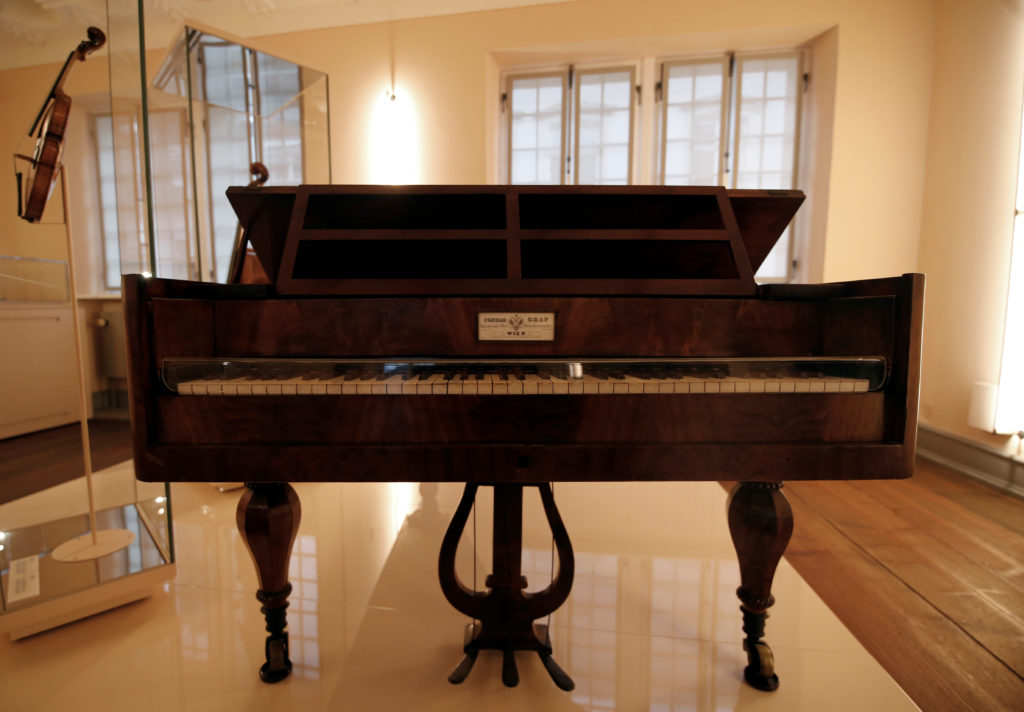 The original last grand piano of Ludwig van Beethoven is seen inside his birth house ahead of his 250th birth anniversary in Bonn, Germany, on Dec. 13, 2019. Photo by REUTERS/Leon Kuegeler

The journey of Beethoven’s hair, its sale at auction, and the medical analysis of it became the subject of a best-selling book, “Beethoven’s Hair: An Extraordinary Historical Odyssey and a Scientific Mystery Solved” by Russell Martin.

More recently, in 2013, a team of ear surgeons — Michael H. Stevens, Teemarie Jacobsen, and Alicia K. Crofts of the University of Utah — published a paper on Beethoven’s medical history in The Laryngoscope. They, too, concluded that “Beethoven’s chronic consumption of wine tainted with lead is a better explanation of his hearing loss than other causes.”

That said, many other doctors and armchair pathologists are not content with simply writing off Beethoven’s sickly nature to lead exposure.

In 2016, for example, a trio of doctors, Avraham Z. Cooper, Sunil Nair and Joseph M. Tremaglio at the Beth Israel Deaconess Medical Center and Harvard Medical School in Boston, argued in a short paper for the American Journal of Medicine the need for “a unifying diagnosis to explain Beethoven’s multi-organ syndrome, including his deafness.” They suggested Cogan syndrome, an autoimmune disorder marked by a systemic inflammation of the blood vessels and involvement of multiple organs, including the liver, bowel, eyes, joints, and, if the vasculitis spread to the vessels nourishing his ears, deafness.

Here is one more instance of a famous person’s medical history with no clear, definitive diagnosis of what actually caused it — an all too common problem when diagnosing those who died before the advent of modern medicine and pathology.

In his later years, although Beethoven was a superb pianist and conductor, there was not much work for a deaf musician and he had to give up his public and performing life almost entirely. Yet he composed not only the 9th Symphony, but completed both “Missa Solemnis,” the solemn mass for orchestra and vocalists, and the opera “Fidelio,” among other major works.

On this day celebrating his birth, some might choose to mourn over the great works of music that might have been had Beethoven only lived longer. Although the maestro suffered from so many physical maladies, he was still able to create a huge body of work that represents humanity at its best and most joyful. Fortunately, we have the transcendent, intellectually rich, and sonorous pieces of music he did give to the world — a gift that continues to enrich us. 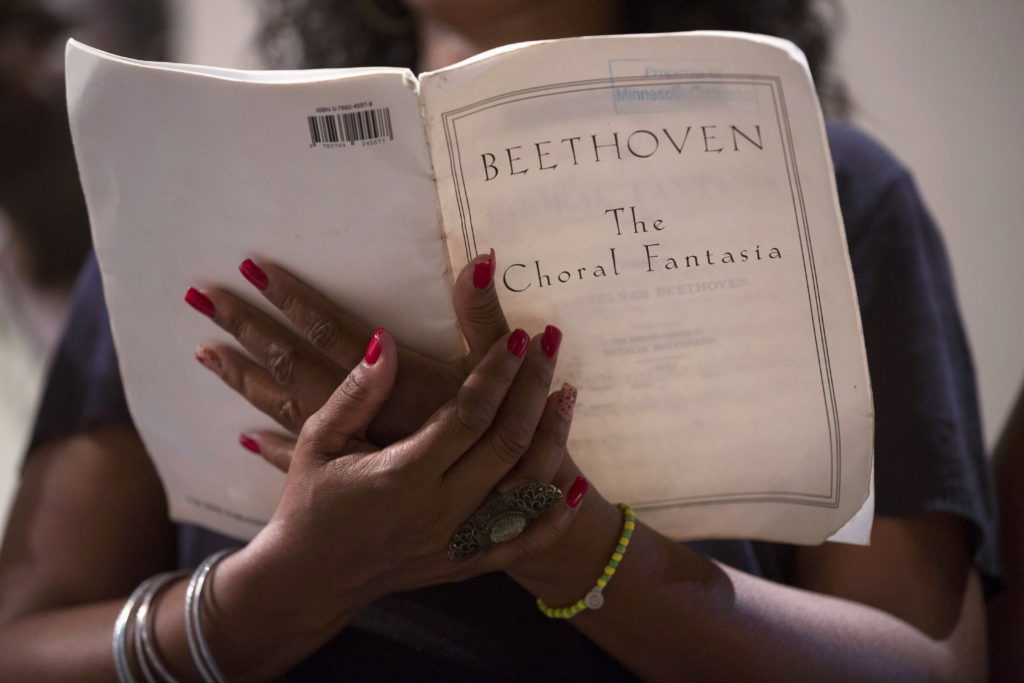 A member of the Cuban National Choir holds a Beethoven score during a rehearsal with the Minnesota Orchestra in Havana , onMay 14, 2015. Photo by REUTERS/Alexandre Meneghini