What Does a GOP-Controlled House Mean for Health Care Reform? 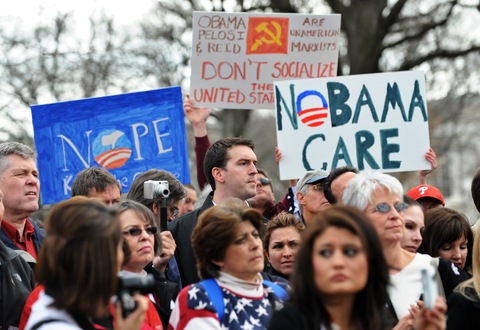 A protest against the health reform law on March 17, 2010. Photo by AFP

Many of the Republicans who swept to victory in the House Tuesday night campaigned on a promise to “repeal and replace” the health care reform law that Congress passed – and President Obama signed – last spring.

And in a press conference Wednesday, presumptive incoming House Speaker John Boehner reiterated the point: “We have to do everything we can to try to repeal this bill and replace it with common sense reforms to bring down the cost of health care,” he said.

But a full-scale repeal would be nearly impossible for them to achieve.

House Republicans may hold a vote to repeal the law as their first order of business when the new Congress convenes. But it would be a symbolic gesture more than anything else — because Democrats retained a slim majority in the Senate, any repeal bill is unlikely to pass that chamber. And even if it did, it would still be subject to a presidential veto.

On Wednesday, the president made it clear that full-scale repeal was not on the table. Both he and Senate Majority Leader Harry Reid, however, said that they would consider possible ‘tweaks’ to the bill. The president noted an unpopular provision requiring new tax reporting from small businesses, saying it was “burdensome” and could be changed.

Republicans have also said they plan to introduce legislation to roll back other measures in the bill – more than 30 such bills have been written already, Bloomberg News reports — and to deny funding to agencies charged with carrying out reform. But in the end, those measures are subject to a presidential veto as well.

As Congressional scholars Norm Ornstein and Tom Mann explained to the NewsHour last month, the Republican’s most effective strategy is likely to be simply “gumming up the works” for the Democrats – calling Health and Human Services Secretary Kathleen Sebelius, and others, to Capitol Hill for ongoing rounds of testimony.

“They can torture the administration with hearings,” Mann said.

And in fact, Michigan Republican Rep. Fred Upton, the likely chairman of the Energy and Commerce Committee, told Politico he plans to do just that.

“I don’t know that a lot of people know [Sebelius],” he said. “She’s only been up once before the committee. They’re writing a lot of regulations to help the states write regulations to promulgate. … She might get her own parking place in Rayburn [House Office Building].”

Meanwhile, outside of Capitol Hill, voters on Tuesday replaced more than 10 Democratic governors with Republicans, providing the GOP with another avenue to fight reform – in the states. Kaiser Health News examines how governors could move to slow or block the implementation of reform in their states:

While Congress may end up in gridlock, the law requires state officials to make decisions in several key areas during the next few years, with lasting impacts on consumers, insurers, state finances, employers and the uninsured.

In many cases, however, the law will go forward regardless. In states that decide not to set up a health insurance exchange, for example, the law stipulates that the federal government step in and set it up for them.

In the end, supporters and detractors of the health reform law agree that the next two years are in some ways just a warm-up for 2012.

Republicans hope that the congressional hearings they’ll convene will “keep alive in minds of American people that this is a raw deal,” says Dean Rosen, the former chief health care advisor to then-Senate Majority Leader William Frist, R-Tenn. “Because this really becomes about what happens after 2012, when the Republicans hope they can take over the Senate and Presidency.”

Ron Pollack, executive director of the health care advocacy group FamiliesUSA, which supports the law, agrees with that assessment: “Ultimately, I think the most significant potential threat to reform is the 2012 elections,” he says.

We’ll have more on the future of health care reform in the new Congress on the NewsHour tonight.