What Famine Refugees Are Eating

Tens of thousands of Somalis have starved to death this year from drought and famine conditions, says the United Nations, bringing a new level of urgency to World Food Day activities held over the weekend.

The World Food Program is providing rations to more than 7.4 million people affected by the drought, and more than 456,000 refugees have converged on the Dadaab camps in Kenya in search of security and daily meals.

The WFP “food basket” of rations provided to refugees from the crisis is made up of staple ingredients and a corn soya blend fortified with nutrients. An entire day’s ration comes to 2,178 calories per person. See how that breaks down for an average rationed meal below. 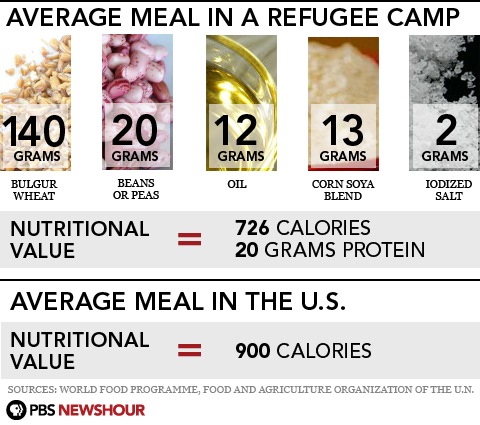 In reality, individual consumption may be much lower than the full ration provided, said the International Medical Corps, which has been providing nutrition and health services in the camps in Kenya.

Refugees may trade or sell part of their food allotment to get other items they need, the IMC said, and the rations are low on animal protein when consumed on their own.

“Malnutrition is not merely a result of too little food, but of a more complex set of issues including insufficient protein, energy and micronutrients in the foods available to refugee families,” said Miel Hendrickson, East Africa coordinator for the International Medical Corps.

The WFP emphasizes there are other sources of nutrition provided for populations particularly at risk: children under the age of 2 receive a protein-rich supplement paste, like a fortified peanut paste, as part of the rations, and women who are breastfeeding receive “super cereal” fortified with nutrients. Children enrolled in school programs also can receive a school ration during the day.

The supplement paste is an essential tool against malnutrition, said Stephane Doyon, nutrition adviser for Doctors Without Borders.

“This is a ready to use paste that is 25 percent dairy … which is highly fortified with key nutrients,” he said. “Children have small stomachs so when you fill the stomach you have to fill it with something that is nutrient dense.”

He applauded the famine aid response for its focus on providing the correct balance of nutrients, especially for young children. Often food aid does not contain the fortified foods needed to prevent malnutrition, he said.

Just last week, the World Health Organization said it will recommend tighter nutritional standards for food aid, something Doctors Without Borders has been pushing. The new guidelines will include increases in vitamins and minerals included in food aid products.

Doyon also noted that there are some weaknesses in the food distribution system that need to be addressed.

“Not everybody is registered [in the camps], so not everybody will receive a ration,” he said. “Delays in distribution can also mean reduced rations.”

Rene McGuffin, spokeswoman for the World Food Program in Washington, said the East Africa famine response has experienced no major delays. The system is one of the most efficient in the world, she said, and when the program does experience breaks in supplies it is usually due to funding issues, not systematic issues. WFP is continuing to call for more donor funding to sustain the daily food effort in Dadaab and the rest of the region.