LAS VEGAS — On a recent morning at this training ground for a new breed of interior designers, a lesson in empathy came in the form of a badminton game.

Students strapped on eye patches and scratched-up swim goggles and took turns clumsily swatting the shuttlecock — an exercise meant to simulate the challenges of conditions like diabetic retinopathy and wet macular degeneration. Afterward, they talked about how to place windows, furniture, and guardrails to make it easier for people with vision problems to move around.

The class here at the University of Nevada, Las Vegas, is part of a new master’s program — one of several sprouting up around the country — designed to train interior designers to use lighting, acoustics, and fabric to try to make day-to-day living easier for people with an array of medical conditions.

There’s already a thriving niche of interior designers who specialize in hospitals, rehab facilities, and nursing homes. More than 2,000 professionals working in the field will gather this month in Orlando, Fla., for an annual conference put on by the nonprofit Center for Health Design.

READ NEXT: Architect with ALS designs a residence he can control with just blinks

But increasingly, students want to do more than just work on institutions.

“We look at health care as the care of people’s health, as opposed to just the typology of designing a hospital,” said Dak Kopec, who teaches the Las Vegas course that included the badminton game. 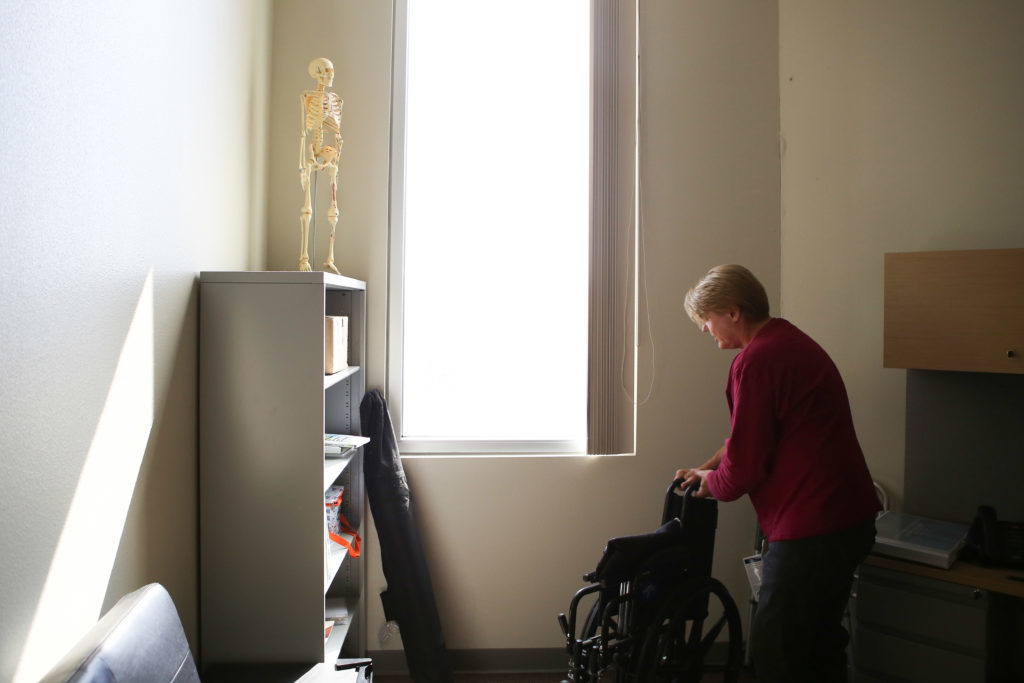 Associate professor Dak Kopec in his officer after his class “Built Environment and Human Health” at University of Nevada Las Vegas in Las Vegas, Tuesday, Oct. 3, 2017 Photo By Bridget Bennett/STAT

Kopec stocks his office with teaching tools that you’d expect in a nursing school, not an interior design program. Among them: wheelchairs, walkers, stethoscopes, gait belts, blood pressure cuffs, elastic bandages, and a skeleton model. (“People always look at me funny. They ask: ‘You’re in a school of architecture?’” he said.)

The Las Vegas program has enrolled about 10 master’s degree students since launching last fall; some courses are also open to undergrads. Florida International University, meanwhile, launched a new new master’s track in health care design this fall. And Texas Tech University is planning to kick off a master’s program aimed at both interior designers and architects next school year. (Tuition for the master’s programs generally runs between $12,000 and $18,000 for in-state residents.)

READ NEXT: ‘Dementia-friendly’ communities take root across US

“I don’t think [today’s students] want to design an operating room or a central sterile supply department,” said Rosalyn Cama, the emeritus board chair of the Center for Health Design.

“But they’re very interested in other questions: How do you bring the farmers market into the lobby of a hospital? Or how you encourage people to take stairs and walk as opposed to taking elevators? And what orientation should a building be positioned in for good circadian rhythm?” she said.

Some tricks of the trade seem obvious: Rails and handholds, for instance, can help patients with low vision navigate.

But most of them are subtle. Designers learn to carefully evaluate how tall or shaggy the carpet is, or how busy its pattern is, so that people are less likely to trip. They strategically place windows or fireplaces as visual aids to help people stay balanced when they stand up. And they design stairs with just the right depth and color contrast to deter falls.

Marisela Thompson, 25, is expected to be the first master’s student to graduate from the Las Vegas program next spring. For her thesis project, she’s studying how best to design homes where the elderly live with younger generations, focusing on details as minute as the placement of interior partition walls.

READ NEXT: Paving the way to a patient-centered approach in health care

The big challenge for the field: building up a body of evidence to support specific design choices.

Some tactics have demonstrated strong promise in research studies, such as using natural lighting to help with mood disorders or installing walking paths to encourage exercise. But the studies are typically limited to six to 12 weeks, so it’s not clear if the effects are durable. 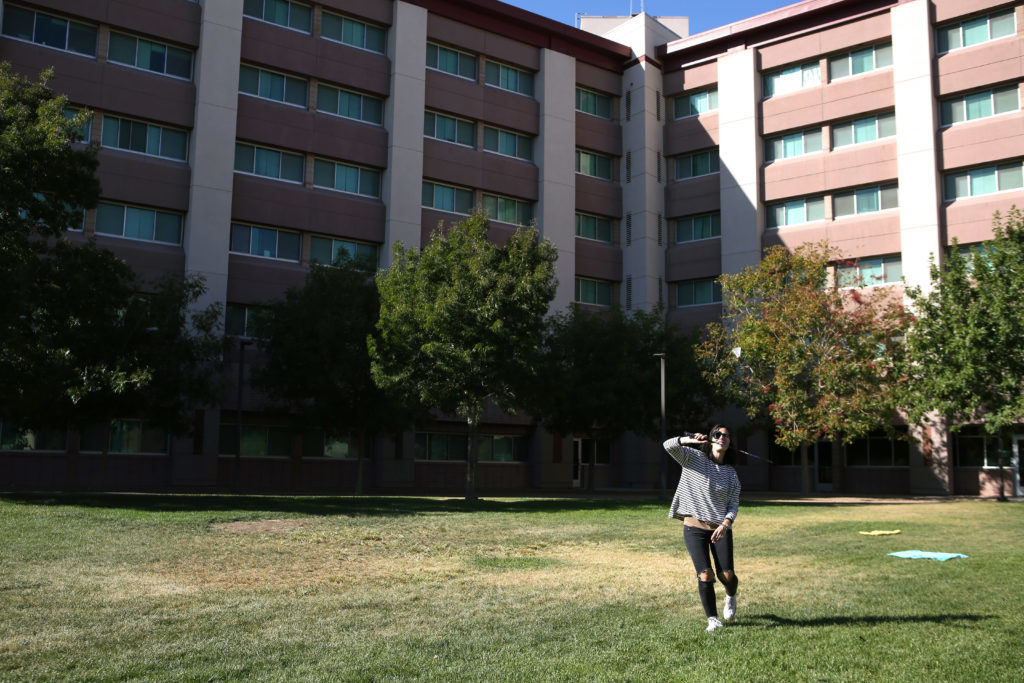 “We have the neuroscience that tells us that these environmental factors have potential in preventing and treating illness,” said Dr. Dylan Wint, a neurologist and psychiatrist at the Cleveland Clinic’s Lou Ruvo Center for Brain Health in Las Vegas. But, he said, “we really don’t have a whole lot of evidence that designing these factors into someone’s lived space will actually do that.”

Wint, who’s acting as a sort of neuroscience consultant for the Las Vegas students, laid out the key questions he believes the field needs to answer: “How do you design for health? And does designing that way really have this salutary effect? Or maybe that’s something you only see after six weeks and it fades after a while.”

UNLV is building its health design program at a time when Nevada is rapidly graying.

As of last year, about 15 percent of Nevada residents were over 65. That’s in line with the national average. But more than 20 percent of the people who moved to Las Vegas last year were over 55, according to the Las Vegas Global Economic Alliance, the region’s economic booster. 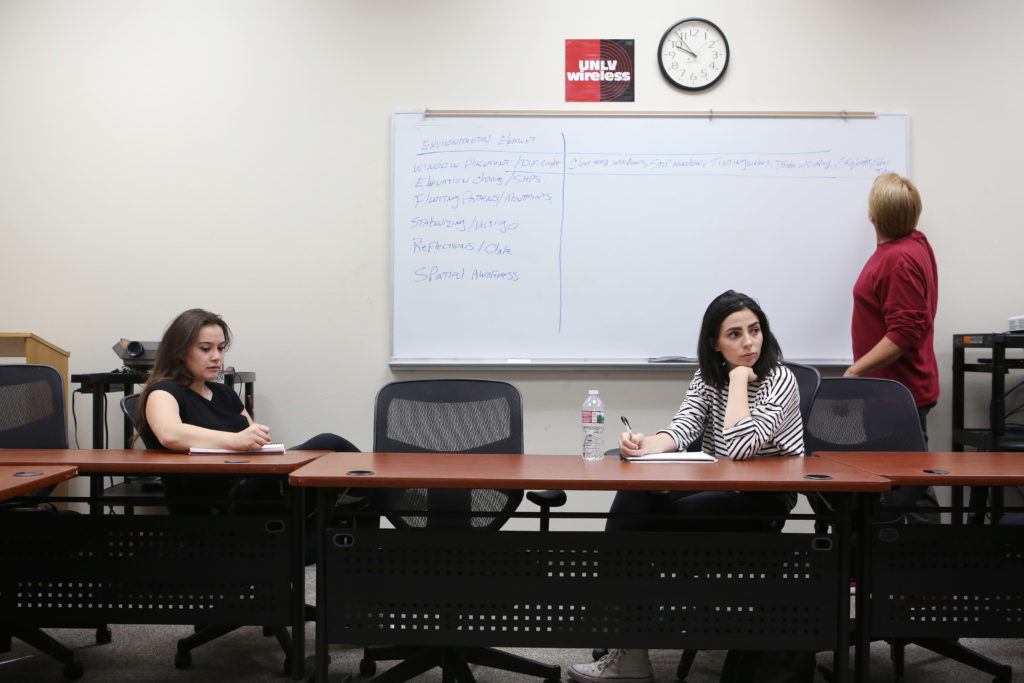 Associate professor Dak Kopec leads a discussion during his class “Built Environment and Human Health” at University of Nevada Las Vegas in Las Vegas, Tuesday, Oct. 3, 2017. Students did activities with eyewear that simulated visual disorders, then went back to their classroom to brainstorm how to design around the disorders. Photo By Bridget Bennett/STAT

The man leading UNLV’s effort to train interior designers to serve this crowd is 75 years old — and thriving. Attila Lawrence still works full-time as a professor, though he plans to retire at 80, so that he’ll have more time to work in his garden.

Lawrence spent years pushing to get the program off the ground. His motivation, he said, is simple: “It’s what the 21st century is demanding of us.”

This article is reproduced with permission from STAT. It was first published on Nov. 3, 2017. Find the original story here.

Left: Associate professor Dak Kopec puts on eyewear that simulates a visual disorder as he leads a discussion during his class "Built Environment and Human Health" at University of Nevada Las Vegas in Las Vegas, Tuesday, Oct. 3, 2017. Photo By Bridget Bennett/STAT