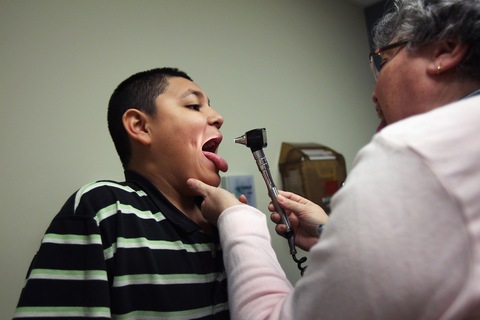 Medical assistant Ann Valdez gives Christian Casteneda, 12, a physical at a community health center in Aurora, Colo. The clinic has received some 6,000 more Medicaid eligable patients since the health care reform law was passed in 2010. Photo by John Moore/Getty Images.

The future of the nation’s largest health insurance program — Medicaid — hangs in the balance of the Supreme Court’s decision on the 2010 health law.

The state-federal program which covers 60 million poor and disabled people would be greatly expanded under the health law, adding 17 million more people starting in 2014.

But if the entire law is struck down, states for the first time since 2009 would be free to tighten eligibility and make it more difficult for people to apply. The law had barred such changes.

And under another scenario — if the justices declare unconstitutional just the law’s expansion of Medicaid — the entire program enacted in 1965 as part of President Lyndon B. Johnson’s Great Society agenda could be threatened, health experts say. Twenty-six states had challenged the expansion, arguing it was “unduly coercive” because they would lose all of their federal Medicaid funding if they refused to expand the program.

“Depending on how sweeping and broadly written the decision is, it could be the entire Medicaid program has been unconstitutional since 1965, but we didn’t know it,” said Sara Rosenbaum, a health policy professor at George Washington University.

Medicaid is the workhorse of the nation’s health system, covering 30 percent of all children, 70 percent of nursing home residents and 40 percent of all deliveries. But because of its byzantine eligibility rules, the program still covers fewer than half of the people with incomes under the poverty level, or $23,025 for a family of four.

Today, in all but four states, children in families with incomes under 200 percent of the federal poverty level are eligible for Medicaid or the Children’s Health Insurance Program. Yet coverage for adults varies greatly by state, and whether a person is pregnant, working, disabled or has dependent children.

The median income level for parents to be eligible for Medicaid is now 63 percent of the poverty level, or about $14,000 for a family of four. Eight states today offer full Medicaid coverage to adults without dependent children and 13 states offer limited Medicaid benefits to childless adults.

But under the law, eligibility will become simpler in 2014: All Americans with household incomes below 133 percent of the federal poverty level (about $31,000 for a family of four) would qualify.

The federal government would pay the full cost for those newly eligible for Medicaid though 2016, then states would gradually assume some costs, maxing out at 10 percent after 2019. Those costs are now more evenly split, with the federal government picking up approximately 57 percent and states paying the rest.

To help ensure enough doctors are willing to treat Medicaid patients, the health law also increases pay to primary care doctors to Medicare levels in 2013 and 2014 — an average reimbursement increase of about 34 percent, according to the American Academy of Family Physicians.

“If the law survives, Medicaid will grow and look much different in 2014 than it does today,” said Alan Weil, executive director of the National Academy for State Health Policy. “If the law goes, states would begin looking at rollbacks in eligibility.”