Why aren’t more Americans getting screened for these cancers?

Many Americans are not getting screened for cancer, putting them at risk of missing out on earlier intervention or receiving a late-stage diagnosis, according to a recent federal report.

More than 80 percent of U.S. women received Pap smears and more than 70 percent got a mammogram in 2015, according to a recent report from the Centers for Disease Control and Prevention. But both of those rates fell short of reaching federal targets (by 12 and 9 percentage points, respectively).

Six out of 10 men and women were screened for colorectal cancer, the only type of cancer screening that increased during the study period, though it still fell short of the federal target of 70 percent. 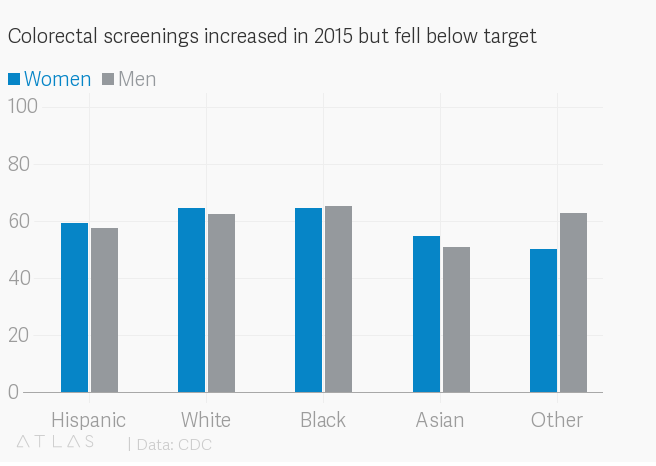 These three cancers, along with prostate cancer, accounted for four out of every 10 new cancer diagnoses and a fifth of all cancer deaths in 2013, the report said.

Researchers at the CDC analyzed prevalence of screenings for these cancers between 2000 and 2015 within self-reported National Health Interview Survey data, which has been collected for more than three decades to gauge how well Americans are take care of their health.

They compared that data with target cancer screening rates established by the U.S. Office of Disease Prevention and Health Promotion in 2010 as part of its Healthy People 2020 goals. The idea was more screenings lead to more time to intervene.

Along with the lower rates, researchers found persistent disparities in cancer screenings among people of color and those without insurance or regular access to health care.

Asian and white women were significantly less likely than Hispanic or African-American women to say they received a Pap smear in the last three years or mammogram in the last two years. 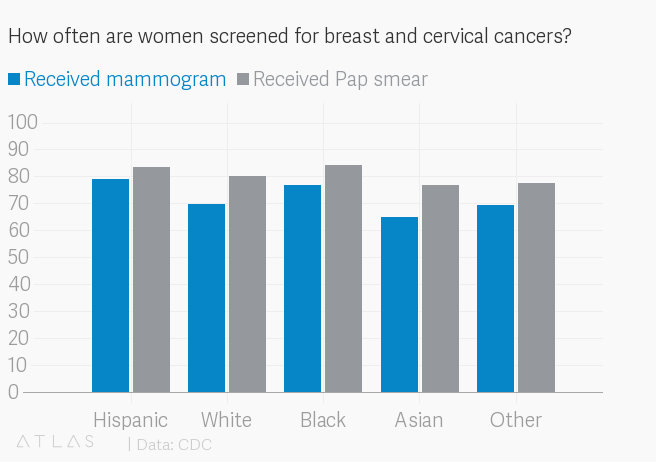 Overall, 81 percent of women ages 21 to 65 reported having a recent Pap smear test for cervical cancer, though women in their 20s were less likely to say they had recently been tested. And among women between age 50 and their mid-70s, 72 percent said they had recently received a mammogram; 63 percent were recently screened for colorectal cancer, a rate similar to what men reported.

Though that rate improved, more than 24 million people would need to be screened for colorectal cancer to hit the 2020 target, the study said.

Why aren’t more people getting screened for cancer? People without insurance coverage or who hadn’t visited a doctor in a year or more were less likely to receive cancer screenings, researchers said.

There’s also the question of messaging. For instance, recommendations for prostate cancer screening have changed; men between ages 55 and 69 are now being encouraged to consult their doctor before testing for prostate cancer. That kind of change can create confusion.

A physician recommendation carries a lot of weight for cancer screenings. According to CDC data, 80 percent of women who reported a recent mammogram said a doctor referred them.

Within the National Institutes of Health, David Chambers leads implementation science at the National Cancer Institute — an effort to develop new ways to translate laboratory science into real-world resources for patients and providers. This can mean looking for ways to improve cancer screening rates within a state or region, or, working with a provider on when or how to recommend a cancer screening test to a patient.

A physician’s suggestion can carry a lot of weight. According to CDC data, 80 percent of women who reported a recent mammogram said a physician referred them. And among those women who got a recent Pap smear, 60 percent said they did so upon a doctor’s recommendation.

The question moving forward, Chambers said: “What are the systems that need to be in place so there’s tangible population benefit?”

Left: Many Americans are not getting screened for cancer, putting them at risk of missing out on earlier intervention or receiving a late-stage diagnosis, according to a recent federal report.