Why Does Health Care Cost So Much in the United States? 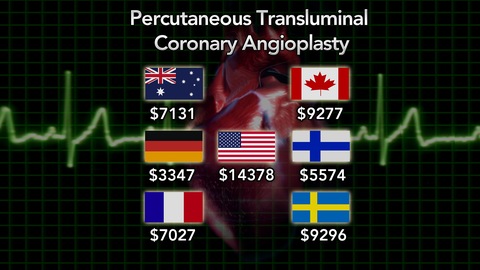 Different costs for the same procedure in 2009. Figures from the OECD.

Staying healthy in the United States is expensive. In fact, in 2009, the average annual cost of health care was $7,960 per person — two and a half times what it was in Japan for the same year.

That’s just one of the numbers we pored over in the new report out by the Organization for Economic Cooperation and Development, which compared health care costs across all 34 of its members. The report illustrates significant variation between costs in different countries.

But there were also some commonalities. Health spending has grown more quickly than GDP in the last decade in all of the member countries, except in Luxembourg.

And, Health at a Glance 2011 shows that obesity rates have doubled or even tripled in many countries since 1980. In more than half of OECD countries, 50 percent or more of the population is now overweight, if not obese. The obesity rate in the adult population is highest in the United States — rising from 15 percent in 1980 to 34 percent in 2008 — and lowest in Japan and South Korea, at 4 percent.

The differences in cost of health care aren’t anything new. Frontline produced a documentary on the subject, “Sick Around the World” in 2008, which you can view here.

So what are some of the reasons that health care costs more in the United States? Are we healthier because of it?

We posed a few of these key questions to Matthias Rumpf from the OECD earlier this week. Answers have been edited for space and clarity.

NEWSHOUR: From an international perspective, why are health care costs in the United States so much higher than any other OECD country?

MATTHIAS: High spending by the U.S. on health must either be because the price of healthcare is higher than in other countries, or else because it provides more health activities than other countries, or a combination of the two. Evidence suggests that both factors are important, but particularly prices. The same set of hospital interventions (including the normal delivery of a baby, a Caesarean section, a hip or knee replacement, etc.) cost 60 percent more in the United States than in a selection of other countries. Similarly, 50 high-selling pharmaceuticals cost 60 percent more in the United States than in Europe. But the United States also uses a lot of expensive diagnostic tests, such as MRI and CT scans, and performs a lot of interventions where it is not always clear-cut whether the procedure is necessary or not — tonsillectomies, knee replacements, and so on. On the other hand, perhaps surprisingly, the U.S. does not have many doctors relative to its population, not many hospital beds, and people do not spend long in hospital when they have to be admitted. Overall, therefore, high prices are the main reason for high health care spending in the United States.

NEWSHOUR: In which areas is the U.S. particularly lacking?

MATTHIAS: The primary care system — the network of family doctors and clinics that people can go to when they first think they have a health problem, and that can advise people on how to stay healthy — is underdeveloped in the United States. This is bad for people’s health, but also raises overall costs. For example, most people with diabetes, asthma or difficulties in breathing (COPD) should not need to be treated in hospital. They require monitoring, but this does not need to happen in hospitals, it is something that the primary care system should manage. It is far cheaper for a family doctor to check that people are following their treatment properly and that it is appropriate, than for things to go wrong and someone to be admitted to hospital as an emergency. Greater attention to the primary care system is urgently needed in the United States.

NEWSHOUR: Does the U.S. provide too much health care?

MATTHIAS: It is almost impossible to say this definitively. Only a physician can really judge the needs of his patients. However, there are reasons to be concerned. The number of tonsillectomies, knee replacements, hip replacements, coronary grafts, Caesarian sections, MRI and CT diagnostic tests and several other areas are much higher in the United States than in most other countries. These are procedures where it is not always definite that they should take place — it is up to the physician and the patient to decide what is best. In countries where there is a greater stress on controlling costs, and different tort law rules, there are fewer such interventions. It is probable that the medical culture in the United States is more likely to ‘do something’ than in other countries — yet overall health outcomes are not better in the United States.

NEWSHOUR: How do Americans compare with other nations in terms of general health?

MATTHIAS: The United States has the highest proportion of adults — 90 percent — reporting that they are in good health, far above the OECD average of 69 percent.

Yet, life expectancy is lower than the OECD average, at 78.2 years compared to 79.5, in 2009. This is despite the United States being a rich country and spending so much on health care. It also has a large rate of premature mortality — people dying before the age of 70 – at 50 percent higher than the OECD average for females, and 30 percent higher for males. Not all of this is due to the healthcare system of course. For instance, there is not much that the health care system can do to prevent deaths from traffic accidents or homicides.

In the United States as in other countries, there are important disparities in health status across different population groups, defined by race or by socioeconomic status. For example, the life expectancy at age 25 for people with the lowest level of education compared with the highest level of education in the United States is 11-16 years less for men and 10-12 less for women. A range of interventions, including some related to the health care system and other broader measures of population health and prevention, are needed to reduce these disparities.

Infant mortality is another indicator that has traditionally been used to gauge both the performance of the health care system and broader socioeconomic factors. Rates are generally low in OECD countries. However the U.S. rate, at 6.5 deaths per 1000 live births, is well above the OECD average of 4.4.

NEWSHOUR: Has the U.S. always been more expensive in terms of health care? If not, when did things start changing?

MATTHIAS: Health expenditure as a share of GDP in the U.S. has always been higher than the OECD average, but the gap has widened a lot in recent decades. Some countries have had similar shares in the past — Canada in the 1960s — but since 1970, the U.S. has outstripped all other high-income OECD countries, with a five-fold increase in health spending per capita in real terms. Health expenditure as a share of GDP was 40 percent higher than the OECD average in 1970. It is now 80 percent higher.

NEWSHOUR: Can we learn from other countries that have brought down costs?

MATTHIAS: No countries have brought down costs — health care costs are rising everywhere (with the occasional year-to-year variation), so the real issue is whether other countries are providing good quality care at lower costs than the United States. A few things are common to the high-performing health systems:

It’s also important to note that talking about ‘the United States’ is misleading. Some of the health care provided in the United States has more in common with the ‘national health service’ model of national provision of integrated care — the Veterans Administration, for example. Some of the health care provided by the VA, and indeed in the private sector, is probably the best in the world. Some other health care is, however, poor. The variation is enormous, and talking about averages sometimes confuses people.

After all, many people in the United States probably think that publicly-owned and operated health care is necessarily unresponsive to people’s wishes and the staff are undermotivated.

This can indeed happen, but is far from being the general rule in many OECD countries, who have efficient, well-financed, responsive health care systems — but at much lower cost than in the United States.

NEWSHOUR: Are there any health care areas in which the U.S. system is faring better than other countries?

MATTHIAS: When we look at the quality of cancer care, the United States stands out as having excellent results. Screening rates for breast and cervical cancer are excellent, so problems can be diagnosed early on. Your chances of living five years after being diagnosed with breast cancer, or cervical cancer, or indeed several other cancers, are better in the United States than almost anywhere else in the world.

Read more on our Health page.