Why Shakespeare’s own finale remains a closed book

Just a few stanzas after Hamlet famously soliloquized “To be or not to be,” his maker, William Shakespeare, contemplated the fact that once a person dies, no living person knows where that departed soul goes:

The undiscovered country from whose bourn
No traveler returns…

That same uncertainty hovers around the final hours of the Bard of Stratford-upon-Avon.

We do know that Shakespeare’s remains are buried in the chancel of the Holy Trinity Church in Stratford. The date of his death was probably April 23, (which may also have been his birthday and is, most definitely, St. George’s Day, the day England celebrates her patron saint). Shakespeare’s funeral, according to the Stratford parish register, appears to have been held on April 25, 1616.

Reflecting on Shakespeare’s gravestone epitaph, Mark Twain once cracked wise that “He was probably dead when he wrote it.” That said, the epitaph is still worth reciting (using modern spellings rather than the Elizabethan inscription, for simplicity’s sake):

Good friend, for Jesus’ sake forbear,
To dig the dust enclosed here.
Blessed be the man that spares these stones,
And cursed be he that moves my bones

Shakespeare was 52 when he died, an age that might seem rather young to modern-day readers. But the Elizabethan Age in Great Britain was a perilous time, fraught with horrific epidemics, deadly assaults, and dangerous medical treatments for those who ailed. The average life span for males at the time has been estimated to be about 42 years of age and far younger among the urban poor. Conversely, there were some men who lived to riper ages of 70 or more years. Average life spans were often shorter among women. Childbearing was especially dangerous and the cause of many female deaths in their 20s and 30s.

During the last few years of his life, Shakespeare essentially retired to Stratford and wrote very little. Of course, as anyone who has passed their 40th birthday can tell you, he may have experienced more fatigue at activities he once attacked with gusto when he was in his 20s or 30s.

We know that Shakespeare either wrote or revised a draft of his last will and testament on March 25, 1616, one month before his demise. An earlier draft may have been written in January of 1615. 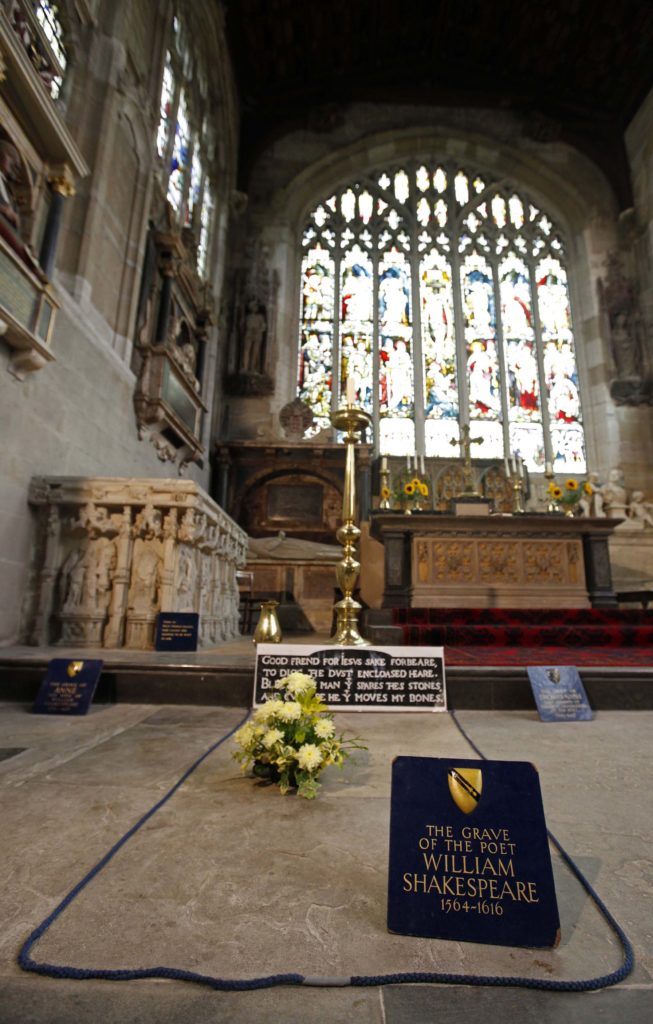 The grave of William Shakespeare is seen inside the Holy Trinity Church where Shakespeare was baptized and buried in Stratford-upon-Avon, southern England. Photo by REUTERS/ Eddie Keogh

Some scholars have speculated that the Bard wanted to revise his will because of his daughter Judith’s marriage to Thomas Quiney on Feb. 10, 1616.

Although the union was a happy one, Thomas got involved in a scandal prior to marrying Judith by impregnating an already married woman named Margaret Wheeler. Both Margaret and the baby died during childbirth but the gossiping tongues wagged for much longer.

Others have pointed out that many people of Shakespeare’s era often wrote their wills when they felt the end of their lives was nigh — and who better than Shakespeare to understand the timing of a grand finale? However, in his will, the writer described himself “in perfect health & memorie, God be praysed.”

The Elizabethan Age in Great Britain was a perilous time, fraught with horrific epidemics, deadly assaults, and dangerous medical treatments.

If Will’s will does not help us answer the primary question of how he died, the four centuries since have multiplied the many legends and convoluted theories like a proverbial rabbit. The most common version is that he went out on a drinking binge with some theatrical buddies, the playwright Ben Jonson, a friend and rival, who traveled from London to Stratford, and the poet-playwright Michael Drayton, who lived in nearby Clifton Chambers. By the next day, William was dead.

John Ward, the vicar of the Holy Trinity Church wrote in his diary: “Shakespeare, Drayton and Ben Jonson had a merry meeting and it seems drank too hard, for Shakespeare died of a fever there contracted.” But Vicar Ward wrote that entry some 50 years after Shakespeare died and death by acute alcohol poisoning, while certainly possible, is not all that common among experienced drinkers — which Shakespeare was.

The fever issue is more vexing. Fever is not generally associated with overindulgence in drink. On the other hand, there was typhus, or “new fever” brewing about Stratford at the time. Yet typhus fever has so many distinct symptoms (e.g., several days of scorching high fevers, mania and incoherence, and a distinct mulberry rash all over the body, caused by broken blood vessels), it would be helpful if there was some record of these findings in the Bard’s case, but, alas and alack, there are none.

To thicken this fatal plot, there was Shakespeare’s son-in-law, John Hall. He was a prominent physician who enjoyed a close relationship with his father-in-law and who once traveled to London with him in 1614. Dr. Hall was reported to be the only physician in Stratford and, one assumes, he must have been called in to examine the ailing William. In 1654, 22 years after Hall died, his clinical notes were published under the title: “Select observations on English bodies, or Cures both empericall and historicall performed upon very eminent persons in desperate diseases.” Oddly enough, Hall described his treatment of his wife, Susanna Shakespeare Hall, but left no information at all about the demise of his very eminent father-in-law.

More likely than other explanations, Shakespeare experienced an acute cerebral hemorrhage, (also known in those days as “apoplexy” and today as a stroke) or a sudden myocardial infarction (heart attack).

In the absence of an explanation, we can be eternally thankful to John Heminge and Henry Condell, two actors of “the King’s Men,” formerly “the Lord Chamberlain’s Men” during Elizabeth I’s reign, and the playing company Shakespeare belonged to and wrote for most of his career. They gathered together the Bard’s 36 plays, which had up until then not been formally published and were only printed on flimsy sheets of paper for the actors’ use. The two actors edited and published them as “Mr. William Shakespeares Comedies, Histories, & Tragedies.” We know this volume as the “First Folio” and it preserved such theatrical gems as “Macbeth” and “Julius Caesar,” which might have otherwise been destroyed and forgotten.

In fact, Shakespeare never really died. He lives on in theaters, books, films, broadcasts, lecture halls, and the hearts of readers around the world. Just as William hoped in his lovely Sonnets, he remains immortal every time someone, somewhere utters one of his lyrical lines or swoons to his brilliant storytelling. 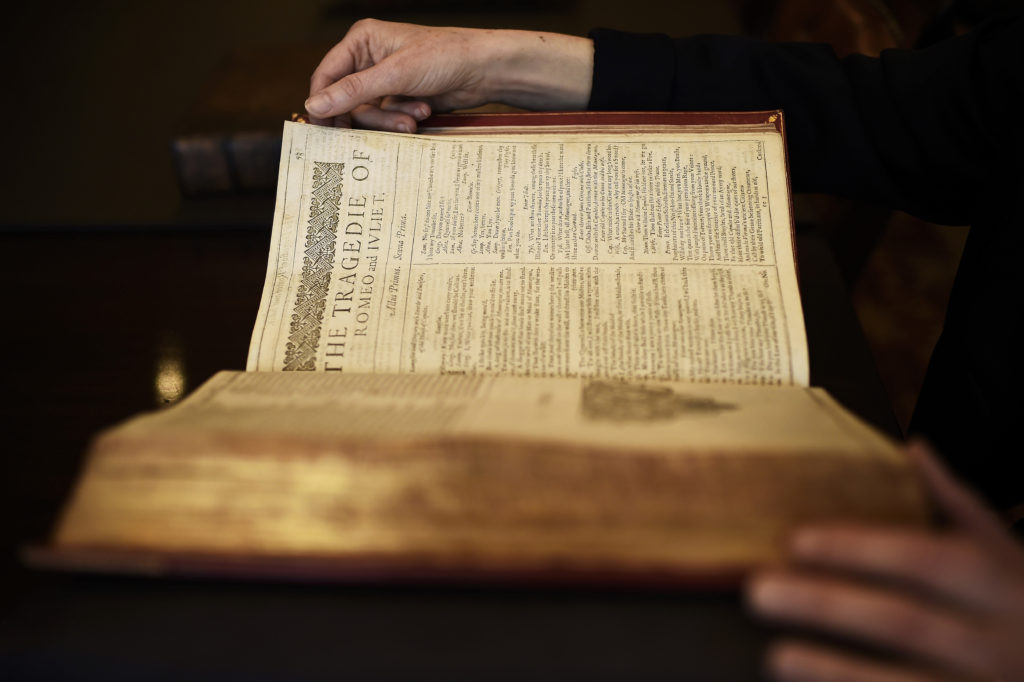 Left: A portrait of poet William Shakespeare at Dartmouth house in London, believed to be the only authentic image of him painted while he was alive. Photo by REUTERS/Luke MacGregor