Wildfires are increasing health risks of already-polluted regions of the U.S., experts warn

As wildfires in the western United States pump harmful smoke into the atmosphere, communities with existing air pollution challenges find themselves at an increasingly higher risk of negative health effects.

For years, researchers who study the San Joaquin Valley have known the region’s geography poses a severe challenge for its residents. Natural features make the Valley more vulnerable to air pollution because it is surrounded by mountains which restrict air movement and cause a concentration of particle pollution.

Experts are now warning of the increasing threat of both wildfires and the dangerous particulate matter pollution from smoke and the challenges that exist in making sure those communities are prepared, especially as the state navigates another record-setting fire season.

It can take time for scientists to trace the impacts of a single fire event. But there is a growing body of data to suggest that wildfire smoke causes increases in the severity of respiratory problems and also raises the possibility of heart attacks and strokes among vulnerable people.

The California Air Resources Board nodded to these risks in a study from the deadly 2018 Camp Fire in northern California, which left 86 people dead and destroyed the city of Paradise. It found that smoke produced from the Camp Fire lasted up to two weeks and elevated levels of lead and zinc as well as traces of calcium, iron and manganese were traced more than 150 miles away, and “as far away as San Jose and Modesto,” the agency stated. And last week, smoke cover was reported as far away as New York City, raising the air quality index to unhealthy levels, according to AccuWeather.

When those events happen, there is increased attention and awareness around how dangerous those conditions can be for health. But Marcel Woodruff, an organizer with Faith in the Valley, a multi-faith advocacy organization that works around energy, housing and immigrant rights issues, said residents in Fresno are affected by pollution disproportionately year-round.

He said on any given day, the air quality index in southwest and southeast Fresno shows higher amounts of unhealthy pollution than in north parts of the city. Woodruff said one of the main problems is air quality hasn’t always been tracked at the neighborhood level, so residents may be unaware of the danger.

Efforts to curb pollution — and to reach residents who may be affected by it — can vary widely depending on where you live. The California Office of Environmental Health Hazard Assessment’s CalEnviroScreen, an online screening methodology used to track air and water pollution, shows the vast region of the San Joaquin Valley is under constant threat from pollutants.

In fact, some census tracts in the Fresno area have earned a 100 percent pollution burden ranking from the state’s tracker due to particulate matter and diesel particulate matter exposure, among other sources. According to the state’s analysis, communities facing the high levels of pollution are overwhelmingly Hispanic, and between the ages of 10 to 64. The data points to socioeconomic factors that may contribute to pollution burden among these communities, such as poverty, education and unemployment.

“There is an actual life cost to it. When air quality is compounded by environmental factors, your bills are more, it costs more to maintain your everyday life.”

For instance, said Tom Knox, executive director of Valley Clean Air Now, residents living in pollution-burdened communities in the Valley may tend to drive older, polluting vehicles that contribute to the air quality impact. But that is not always by choice, Knox said.

“Because low-income people have this limited range of choices for transportation, they’re buying what they can afford,” Knox said. “It’s really this circular situation of ‘what’s worse, the cost and chaos or the pollution,’ and it’s pretty much a tie in my opinion.”

Kieshaun White, who runs “Healthy Fresno Air,” a website dedicated to teaching residents about pollution in their community, said pollution is a reminder of larger work that needs to be done to address the environment. He began raising awareness of air pollution as a teenager in 2016 by traveling to Fresno Unified high schools and placing air monitors, designed by Purple Air, to help students access information about their air quality.

White said his efforts to inform on local air monitoring have helped engage young people and local organizations in clean air advocacy, and he plans to expand his clean air project by placing air monitors at apartment complexes and churches around the city. He said up until he was 13, he carried an inhaler due to asthma, part of what led him to his work. 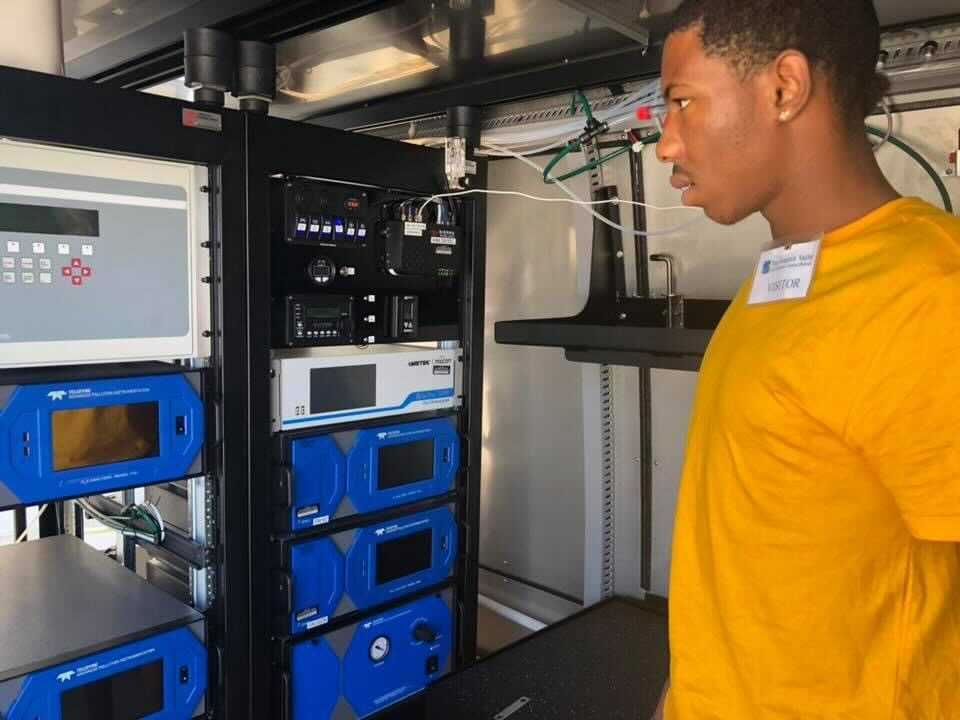 Kieshaun White, founder of the website “Healthy Fresno Air,” stands inside a van that tracks air quality in the Fresno area. (Courtesy photo)

“The thing about educating a person about a subject is you have to give them a spark of inspiration. Air is not looked at because you can’t see it, but it’s all around us and it’s what makes life move and go on,” White said. “In order to live a healthy life, you have to make sure the air is healthy and does not harm you. That’s what the air does to us in southwest Fresno.”

Researchers estimate the burned area in the United States from wildfires has quadrupled over the past four decades. In California, the yearly wildfires, fueled by dry lands and searing temperatures, have begun to worry doctors who say there is a clear trend between the level of pollution from wildfires and respiratory health in communities.

Dr. Anil Ghimire, associate professor at UCSF and medical director for the chronic lung disease program in Fresno, California, said hospitals in the San Joaquin Valley tend to see an uptick of patients who visit the emergency room or request more medication for their illnesses when pollution levels increase, as they do during wildfires.

“The number of people affected by wildfires is getting bigger each year,” Ghimire said. “You need to have bigger population exposure to really assess the risks.”

The challenge for doctors, Ghimire said, is fires are becoming more frequent and not enough data exists yet to examine the long-term impact of smoke to human health. What has been clear to doctors for decades, is that the pollution in the San Joaquin Valley makes the growing presence of wildfire smoke more dangerous and may contribute to the decrease of life longevity in residents, he said.

“We should pay even more attention to this chronic level of pollution in the Valley that stays for a longer period,” Ghimire said. “I think that affects people’s health outcomes and logentivity … people who were born here, lived here, grew up here, they will have a decreased longevity.”

READ MORE: How wildfires can threaten your health

Ghimire added that firefighters are a key group that would provide clues about the effects of long-term exposure to wildfire smoke. He also said children are more prone to diseases like asthma simply by living in places like the San Joaquin Valley that have chronic pollution burdens from highways and agricultural industries.

That has alarmed air advocates who have taken up a bigger role in addressing the problems.

Woodruff, the organizer who also serves as White’s mentor, said cleaner air would especially benefit those with chronic medical illnesses like asthma and diabetes, which disproportionately affects Black, Hispanic and Indigenous people. The Department of Public Health in Fresno also estimates infant mortality is higher among Black babies than other groups, and advocates say one of the many factors, aside from historical racism, is exposure to pollution.

“There is an actual life cost to it. When air quality is compounded by environmental factors, your bills are more, it costs more to maintain your everyday life,” Woodruff said.

As intense fires continue to burn across the West, heightened response is creeping everywhere. Last week, the utility company Pacific Gas and Electric Corp. in California committed to take 10,000 miles of power lines in “High Fire Threat Districts” and put them underground, in order to avoid wildfire disasters like those blamed on the company in previous years.

Burying the power lines would be “the largest effort in the U.S. to underground power lines as a wildfire risk reduction measure,” the company said in a statement.

For agencies and groups tasked with assisting residents who evacuate wildfires, the fire season doesn’t just bring concern about air quality, but also the urgency of finding adequate shelters for evacuees.

“We have plans in place and plans for those plans,” Taylor Poisall, a spokeswoman with the Red Cross of Central California, told the NewsHour.

Poisall said the emergency group has been preparing for months after being inundated with evacuees during last year’s Creek Fire that started in September around the community of Mammoth Lakes and burned through 379,895 acres of the Sierra Nevada east of Fresno. At least 1,800 people were sheltered in hotels across central San Joaquin Valley counties last fall when smoke choked the state.

The hotels were one part of the Red Cross’ efforts to limit the spread of COVID-19 among evacuees. This year, with vaccinations and a lesser spread of the virus, the Red Cross plans to return to congregate shelters with health measures in place, Poisall said. The Red Cross typically plans for fire season as far ahead as Thanksgiving.

“We knew this year was also going to be a busy wildfire season, and it’s already turning out to be that,” Poisall said.