When a secret president ran the country

Woodrow Wilson may have been one of our hardest-working chief executives and by the fall of 1919, he looked it.

For most of the six months between late Dec. 1918 and June 1919, our 28th president was in Europe negotiating the Treaty of Versailles and planning for the nascent League of Nations, efforts for which he was awarded the 1919 Nobel Peace Prize (an award he did not officially receive until 1920). Back home, however, the ratification of the treaty met with mixed public support and strong opposition from Republican senators, led by Henry Cabot Lodge (R-Mass.), as well as Irish Catholic Democrats. As the summer progressed, President Wilson worried that defeat was in the air.

Bone-tired but determined to wage peace, on Sept. 3, 1919, Woodrow Wilson embarked on a national speaking tour across the United States so that he could make his case directly to the American people. For the next three and a half weeks, the president, his wife Edith Bolling Galt Wilson, assorted aides, servants, cooks, Secret Service men and members of the press rode the rails. The presidential train car, quaintly named the Mayflower, served as a rolling White House. Also joining the party was the president’s personal physician, Cary T. Grayson, who had grave concerns over his patient’s health.

Not that Woodrow Wilson was the picture of health before beginning this grueling crusade.

When Wilson took office, the famed physician and part-time novelist Silas Weir Mitchell ominously predicted that the president would never complete his first term. Dr. Weir was wrong on that prognosis even though Dr. Grayson did fret aloud and often about the Wilson’s tendency to overwork.

For example, while negotiating with European leaders on arriving at an equitable peace to end “the Great War,” Wilson worked incessantly, eliminating all the exercise, entertainment and relaxation sessions from his schedule. And like tens of millions of other people during the worst pandemic in human history, the American president succumbed to a terrible case of influenza in early April of 1919.

All during September of 1919, as the presidential train traveled across the Midwest, into the Great Plains states, over the Rockies into the Pacific Northwest and then down the West Coast before turning back East, the president became thinner, paler and ever more frail. He lost his appetite, his asthma grew worse and he complained of unrelenting headaches.

Unfortunately, Woodrow Wilson refused to listen to his body.

He had too much important work to do. Combining his considerable skills as a professor, scholar of history, political science and government, orator and politician, he threw himself into the task of convincing the skeptics and preaching to the choir on the importance of ratifying the treaty and joining the League of Nations. At many of the “whistle stops,” vociferous critics heckled and shouted down his proposals. In the Senate, his political opponents criticized Wilson’s diplomacy, complained that the treaty reduced the Congress’s power to declare war, and ultimately voted the treaty down.

Late on the evening of Sept. 25, 1919, after speaking in Pueblo, Colorado, Edith discovered Woodrow in a profound state of illness; his facial muscles were twitching uncontrollably and he was experiencing severe nausea. Earlier in the day, he complained of a splitting headache.

Six weeks after the event, Dr. Grayson told a journalist that he had noted a “curious drag or looseness at the left side of [Wilson’s] mouth — a sign of danger that could no longer be obscured.” In retrospect, this event may have been a transient ischemic attack (TIA), the medical term for a brief loss of blood flow to the brain, or “mini-stroke,” which can be a harbinger for a much worse cerebrovascular event to follow — in other words, a full-fledged stroke.

On Sept. 26, the president’s private secretary, Joseph Tumulty, announced that the rest of the speaking tour had been canceled because the president was suffering from “a nervous reaction in his digestive organs.” The Mayflower sped directly back to Washington’s Union Station. Upon arrival, on Sept. 28, the president appeared ill but was able to walk on his own accord through the station. He tipped his hat to awaiting crowd, shook the hands of a few of the people along the track’s platform, and was whisked away to the White House for an enforced period of rest and examination by a battery of doctors.

Everything changed on the morning of Oct. 2, 1919. According to some accounts, the president awoke to find his left hand numb to sensation before falling into unconsciousness. In other versions, Wilson had his stroke on the way to the bathroom and fell to the floor with Edith dragging him back into bed. However those events transpired, immediately after the president’s collapse, Mrs. Wilson discretely phoned down to the White House chief usher, Ike Hoover and told him to “please get Dr. Grayson, the president is very sick.”

Grayson quickly arrived. Ten minutes later, he emerged from the presidential bedroom and the doctor’s diagnosis was terrible: “My God, the president is paralyzed,” Grayson declared. 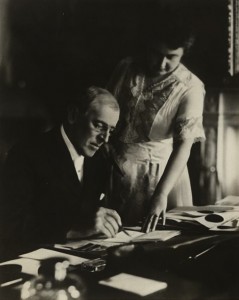 What would surprise most Americans today is how the entire affair, including Wilson’s extended illness and long-term disability, was shrouded in secrecy. In recent years, the discovery of the presidential physicians’ clinical notes at the time of the illness confirm that the president’s stroke left him severely paralyzed on his left side and partially blind in his right eye, along with the emotional maelstroms that accompany any serious, life-threatening illness, but especially one that attacks the brain. Only a few weeks after his stroke, Wilson suffered a urinary tract infection that threatened to kill him. Fortunately, the president’s body was strong enough to fight that infection off but he also experienced another attack of influenza in January of 1920, which further damaged his health.

Protective of both her husband’s reputation and power, Edith shielded Woodrow from interlopers and embarked on a bedside government that essentially excluded Wilson’s staff, the Cabinet and the Congress. During a perfunctory meeting the president held with Sen. Gilbert Hitchcock (D-Neb.) and Albert Fall (R-N.M.) on Dec. 5, he and Edith even tried to hide the extent of his paralysis by keeping his left side covered with a blanket. Sen. Fall, who was one of the president’s most formidable political foes told Wilson, “I hope you will consider me sincere. I have been praying for you, Sir.” Edith later recalled that Woodrow was, at least, well enough to jest, “Which way, Senator?” A great story, perhaps, but Wilson’s biographer, John Milton Cooper, Jr. doubts its veracity and notes that neither Edith nor Dr. Grayson recorded such a clever rejoinder in their written memoranda from that day.

By February of 1920, news of the president’s stroke began to be reported in the press. Nevertheless, the full details of Woodrow Wilson’s disability, and his wife’s management of his affairs, were not entirely understood by the American public at the time.

What remained problematic was that in 1919 there did not yet exist clear constitutional guidelines of what to do, in terms of the transfer of presidential power, when severe illness struck the chief executive. What the U.S. Constitution’s Article II, Section 1, Clause 6 on presidential succession does state is as follows:

But Wilson, of course, was not dead and not willing to resign because of inability. As a result, Vice President Thomas Marshall refused to assume the presidency unless the Congress passed a resolution that the office was, in fact, vacant, and only after Mrs. Wilson and Dr. Grayson certified in writing, using the language spelled out by the Constitution, of the president’s “inability to discharge the powers and duties of the said office.” Such resolutions never came.

In fact, it was not until 1967 that the 25th Amendment to the Constitution was ratified, which provides a more specific means of transfer of power when a president dies or is disabled. Parenthetically, many presidential health scholars continue to argue that even the 25th Amendment is not clear enough in terms of presidential succession and needs revision, especially in the face of 21st century medicine and the increased chances of surviving major illnesses with severe and impairing disabilities.

For the remainder of her life, Edith Wilson steadfastly insisted that her husband performed all of his presidential duties after his stroke. As she later declared in her 1938 autobiography, “My Memoir”:

So began my stewardship, I studied every paper, sent from the different Secretaries or Senators, and tried to digest and present in tabloid form the things that, despite my vigilance, had to go to the President. I, myself, never made a single decision regarding the disposition of public affairs. The only decision that was mine was what was important and what was not, and the very important decision of when to present matters to my husband.

Over the last century, historians have continued to dig into the proceedings of the Wilson administration and it has become clear that Edith Wilson acted as much more than a mere “steward.” She was, essentially, the nation’s chief executive until her husband’s second term concluded in March of 1921. Nearly three years later, Woodrow Wilson died in his Washington, D.C., home, at 2340 S Street, NW, at 11:15 AM on Sunday, Feb. 3, 1924.

According to the Feb. 4 issue of The New York Times, the former president uttered his last sentence on Friday, Feb. 1: “I am a broken piece of machinery. When the machinery is broken — I am ready.” And on Saturday, Feb. 2, he spoke his last word: Edith.

As we look forward to the presidential campaign of 2016, it seems appropriate to recall that Oct. 2, 1919, may well mark the first time in American history a woman became de-facto president of the United States, even if Edith Wilson never officially held the post. Indeed, the prolonged blockage of blood flow to his brain changed more than the course of Woodrow Wilson’s life; it changed the course of history.

Left: As we look forward to the presidential campaign of 2016, it seems appropriate to recall that Oct. 2, 1919, may well mark the first time in American history a woman became de-facto president of the United States. Painting by Frank Graham Cootes, via Wikimedia Commons