Can zapping your neck help you quickly learn a foreign language?

Someday it may be possible for a soldier to stick a tiny electrode behind her ear in order to learn a foreign language more quickly.

That’s the goal of a Defense Advanced Research Projects Agency initiative that announced this week providing more than $50 million in funding for eight teams to research how to improve people’s ability to learn new things by stimulating the peripheral nervous system, which consists of the nerves that fan out from the brain and spinal cord.

Specifically, many teams are looking at the vagus nerve, a nerve near your neck that connects up to the brain and down to the gut.

Electric shocks delivered to the vagus nerve have shown promise in treating depression and epilepsy, and products are already on the market for those purposes. But those are implants — they require surgery to install and remove. Researchers hope that they can design noninvasive devices to stimulate the vagus nerve that could sit behind the ear or on the neck, where the nerve comes close to the surface of the skin.

READ NEXT: Seeking an edge, these brain hackers mix up risky chemical cocktails for breakfast

DARPA’s goal isn’t to treat illness, but rather to enhance healthy people.

Some research has shown that stimulating the vagus nerve during learning can have an effect, albeit in highly controlled laboratory environments.

But there are lots of open questions. Is it best to zap the nerve before you learn something, while you’re learning it, or afterward? How strong should the pulse be? How do you make sure that you’re not sending damaging electrical signals to other parts of your body connected to the vagus nerve?

To find answers, some teams are studying mice, rats, or pigs. Others are going straight to humans. 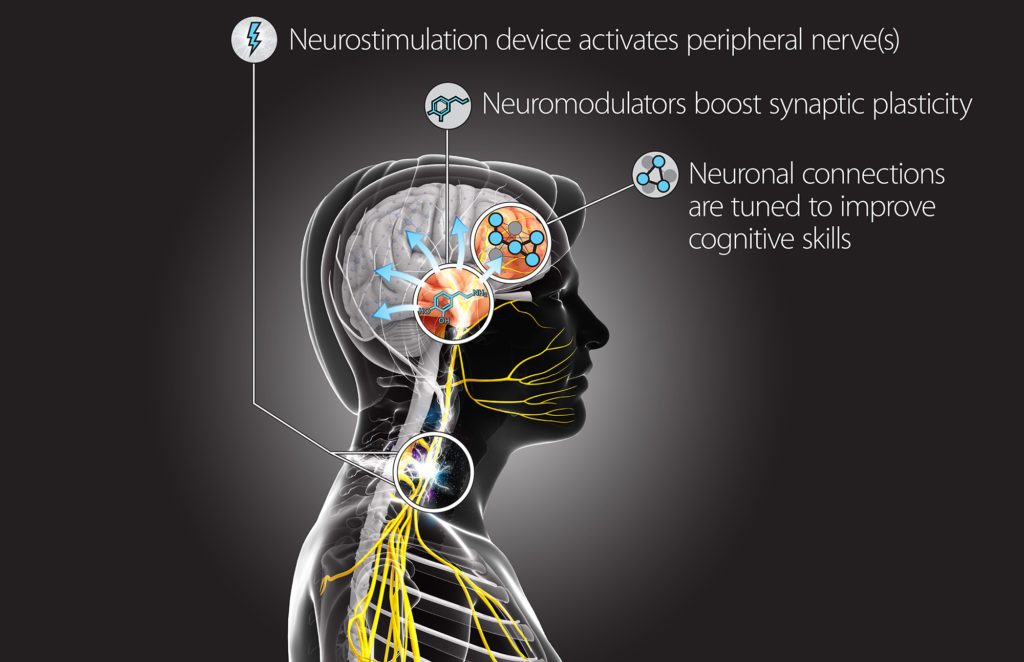 Xiaoqin Wang, a biomedical engineering professor at Johns Hopkins University who is part of the DARPA project, is starting human trials in a matter of months.

He’s trying to see how stimulating the vagus nerve will impact the ability of people to learn new words.

Words that sound similar but mean very different things are particularly challenging to learn in a new language. Take “rock” and “lock,” for example. Wang will teach test subjects sets of words, while some receive small electrical shocks via earpiece stimulators. Others will be learning the natural way. Wang will compare the two groups to determine the effect of the stimulation.

Of course, there are other, less high-tech stimulants, said Kevin Otto, an associate professor of biomedical engineering at the University of Florida who is part of the DARPA project. Coffee. Sleep. Pharmaceuticals. But those impact your entire body.

Other research is trying to electrically stimulate the brain itself to improve cognition via what’s called transcranial magnetic stimulation. But still, scientists say, that approach delivers electricity over a large area.

Direct nerve stimulation, on the other hand, could allow them to target changes to a specific part of your brain — once scientists can figure out how everything is connected.

“It’s not just activating the brain, it’s getting the right cells within that area,” said Justin Williams, chair of biomedical engineering at the University of Wisconsin, Madison, who is leading one of the teams under the DARPA initiative. “That’s where we think that activating the periphery might have some benefit.”

Otto is particularly excited about embedding tiny electrodes in bundles of nerves to stimulate individual cells, which might be more precise than putting a patch on your neck and hoping for the best. The vagus nerve connects to important organs, like your heart, he noted.

“It’s relatively important that, while trying to change the brain, you don’t significantly change the heart,” Otto said.

Despite DARPA’s stated goal of enhancement, researchers receiving money from the agency noted the therapeutic value of the research.

“You can envision that if we could come up with a kind of way to non-invasively control brain chemistry with high fidelity, that there’s a lot of human conditions we could improve,” Williams said. For example, learning disabilities in children, or memory disorders in adults.

But for every beneficent use of this technology, one could imagine a dangerous one. Could a device that speeds up learning also slow it down?

To address questions like this, DARPA is funding an ethics workshop that should happen within the year, according to the program’s announcement.

This article is reproduced with permission from STAT. It was first published on April 28, 2017. Find the original story here.