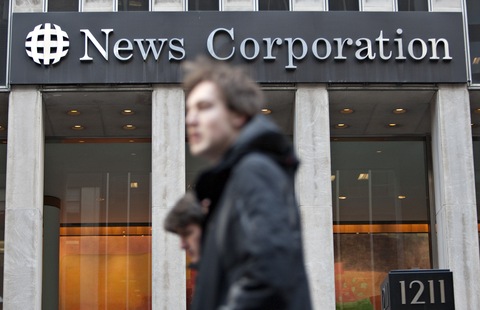 Seeking to drum up some excitement and donations from the base of the party, the Democratic Governors Association called the move, first reported by Bloomberg News in June, “a jaw-dropping violation of the boundary between the media and corporate realm.” And Kelly McBride, ethics instructor at journalism training facility The Poynter Institute, said, “This clearly implies that Rupert Murdoch is no longer interested in providing fair news. It confirms that Fox News is an arm of the Republican Party.”

But not everyone thinks it’s fair to single News Corp. out.

“It’s not completely breaking precedent,” points out Bob Zelnick, a longtime ABC News correspondent who now teaches journalism at Boston University. “General Electric has owned NBC for years. If they make a political contribution, is that intending to show bias in their news broadcast? I think it’s more than a coincidence, but less than completely damning evidence that news programs are tailored to the ideology of their controlling corporation.”

So why the uproar? McBride says you can’t equate News Corp. with companies that do more than just cover the news. “This is News Corp. News is what they do. It is a journalism company. General Electric doesn’t make editorial decisions for NBC News. And Time Warner owns more than just news media outlets.” She admits that other media owners have tried to wield political influence through donations, but, “they spread it around so it doesn’t create a one-sided bias,” she said.

News Corp. spokesman Jack Horner maintains, “It’s patently false that a corporate donation would have any bearing on our news-gathering activities at Fox News or any other of our properties.” But McBride doesn’t buy that argument. “At the very least, it creates the perception that Fox News is in bed with the Republican Party. If they were serious about not being a part of the news outlet, they would be just as concerned with the perception as the actual decision,” she said.

So what should Fox do now to mitigate this, if they are concerned about the perception of ethics? Says McBride, “My answer is that they should have thought of that before the donation was made.”

Zelnick sees the donation as one chapter in a much broader story. “It goes beyond whether this company made this one contribution.” He noted a 1998 decision by ABC News not to broadcast an investigative report that Walt Disney Co. had employed known pedophiles at some of their theme parks. “There’s an example where a corporation sees it could potentially get in trouble, so it pulls a reporter off a story because they are an employee of that parent corporation.”

He went on to cite the 22-month long CIA leak investigation that ended in 2005. “When U.S. Attorney Patrick Fitzgerald summoned reporters to testify as to their private conversations with Scooter Libby, he met with resistance. But the profit-making segment of these media companies, Time Warner for one, didn’t want to have that potential expense hanging over their head. In the heyday of journalism, no self-respecting reporter would have exposed his sources. And one after one, almost everyone did.”

“The days of Bill Paley at CBS and David Sarnoff at NBC are gone,” Zelnick added. “This instance is reflective of the fact news has become another holding of a corporate master, and whether or not News Corp. should have done it, it’s the type of thing we have to learn to live with.”