The conference, which runs through Jan. 9, features 3,600 exhibitors showing off their latest products and services to more than 150,000 attendees, according to estimates.

Here are 10 products that debuted at CES that could revolutionize 2016.

1. A hoverboard that doubles as your butler

Day 4 of #CES2016: Highlights from the show floor https://t.co/eCwuH2dsT8 pic.twitter.com/1MHM2sr8fe

What it is: Your adorable new best friend.

The Ninebot Segwey Robot is essentially a hoverboard butler that comes equipped with two blinking eyes, a monotone robotic voice and tiny arms, the better to serve you with. It can recognize voice commands and has a camera built into its face. And you can ride it. Able to reach a maximum speed of just over 12 mph, Ninebot is “an excellent alternative to walking,” according to the company’s website.

After you hop off, you can watch it drive itself around, maneuvering through small spaces and obstacles and complete other simple tasks like answering the door.

How much it costs: Unknown

When you can buy it: Currently, you can’t. Segway reportedly plans to make the Hoverbutlerbot commercially available, with an open-platform developer kit due out in the second half of 2016. 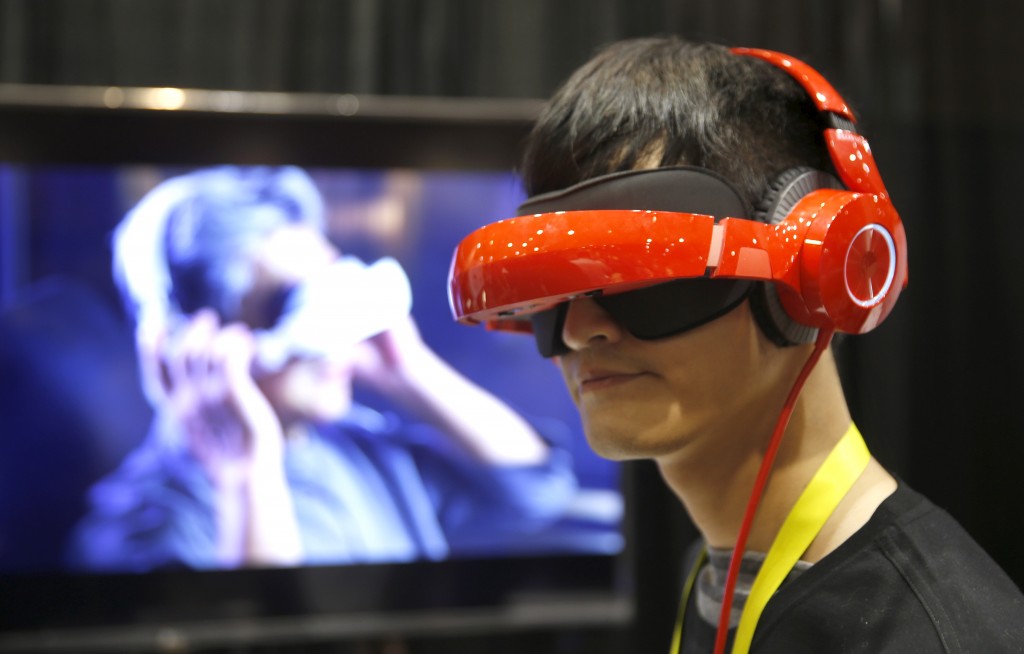 What it is: The smallest mobile theater system ever.

The Royole-X Smart Mobile Theater system is basically a foldable set of noise-canceling headphones that you wear over your eyes for an immersive theater experience. The device lets you watch movies streamed from Netflix, Amazon Video, Hulu and YouTube and play videos from gaming platforms PlayStation, Wii, Xbox, Apple and Google.

And glasses wearers rejoice: The system has customizable vision controls that can be adjusted to varying optical powers so you can take your specks off.

When you can buy it: It’s now available for preorder on Indiegogo.

3. The big cheese of smart refrigerators 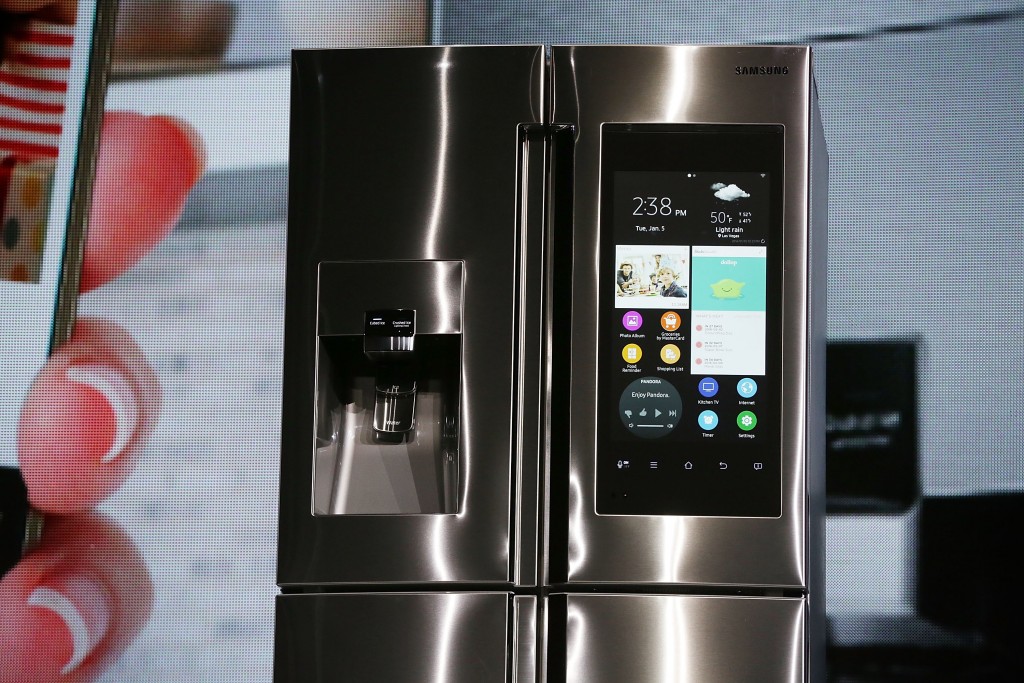 The Samsung Family Hub refrigerator, which is connected and features a 21.5 inch full HD LCD screen, is introduced during CES 2016. Photo by Alex Wong/Getty Images

What is it: A fridge that aims to be the focal point of your family.

More than just a repository for your leftovers, the Family Hub refrigerator from Samsung is designed to keep your kitchen fully stocked and serve as the digital command center of your household.

A digital screen on the outside allows you to post, share and update calendars, pin photos and artwork and leave notes, all from your smartphone. It can also show the weather, play recipe videos and stream music from other devices.

But perhaps the best part: You can actually order groceries via an app on the refrigerator’s screen. But if you’d rather go to the market yourself, three cameras on the inside take a picture of the fridge’s content every time you close the doors, allowing owners to take a peek at what you have at home even while you’re out.

How much it costs: No word yet.

When you can buy it: Look for it this Spring.

4. Wave hello to the sports car of tomorrow

What it is: A car that lets the driver sit back and enjoy the view.

The BMW i Vision Future Interaction is a concept car that takes self-driving cars to the next level. In addition to offering three different driving modes, including an automated one where the car drives itself, the hype surrounding the car’s debut centers on BMW’s AirTouch technology that let’s the driver control it all with the wave of a hand.

With a flat hand, the driver can guide navigation, entertainment and connectivity functions by “selecting” items on a 21-inch display screen — the centerpiece of the car — above the passenger’s side dashboard, activated by the driver’s movement and sensors throughout.

To select, the driver either pushes forward in space or touches a button on the steering wheel.

How much it costs: Unknown

When you can buy it: Neither the interior or the exterior features of the car are ready for production, but the company says the self-driving technology and the gesture-controlled system will be a part of BMW’s regular production in the coming years.

5. The best part of waking up? Your nose knows. 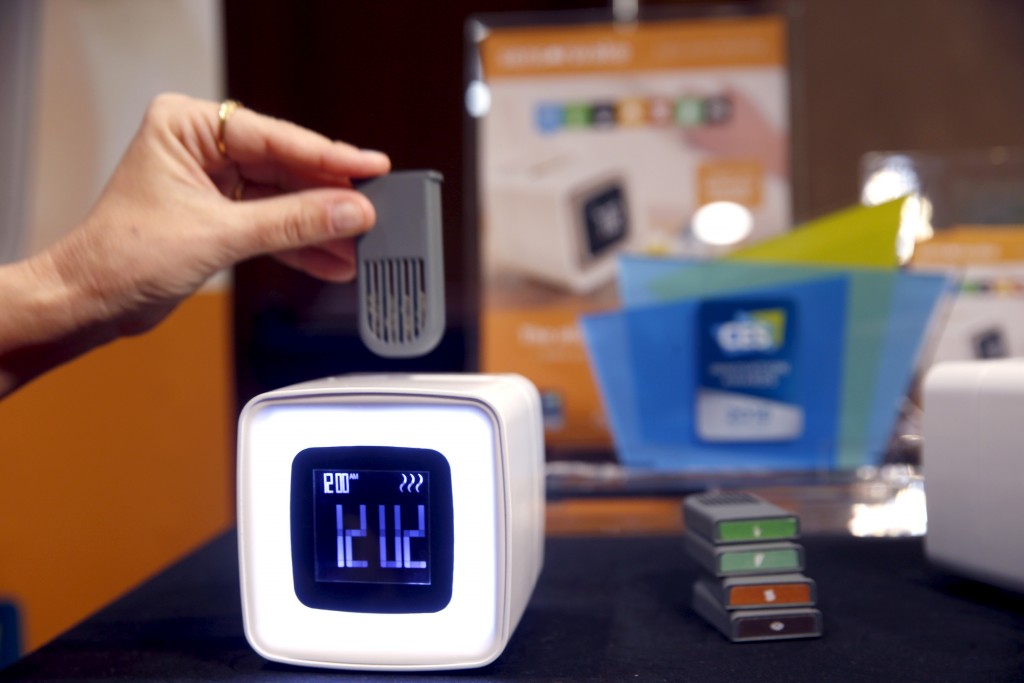 An aroma module is inserted into a Sensorwake alarm clock during CES Unveiled. Photo by Steve Marcus/Reuters.

What is it: Alarm clocks that rouse only your sense of hearing are so 2015. Rise and shine in the future with the Sensorwake alarm clock that awakens your sense of smell.

An aroma module inserted in the clock releases your choice of scent, including croissant, espresso, seaside, lush jungle, chocolate or peppermint, designed to gently wake you up at the programmed time.

And if you are wont to set multiple alarms, the clock will sound an audible one if you haven’t “silenced” it after three minutes.

When you can buy it: It’s available for preorder now through the company’s website.

6. The Keurig of beer brewing

What is it: The next appliance vying for counter space in your kitchen.

With “Pico,” the company PicoBrew hopes to make brewing beer as easy as brewing coffee. The appliance lets you brew your own fresh pint of craft beer using ready-to-brew “PicoPaks” that have been designed with help from more than 100 craft breweries.

“A lot of people just want fresh craft beer like they had in the brew pub,” said PicoBrew CEO and Founder Bill Mitchell at CES. “They realized cans and bottles staled and they wanted to get the fresh product.”

When you can buy it: The PicoBrew is now available for preorder on Kickstarter.

7. A human airbag for the slopes

What is it: Après-skiware won’t be just for hanging around the lodge anymore. Soon it can actually protect you on the slopes.

The Smart Ski Airbag Vest, made by sporting goods company In&motion headquartered in the French Alps, measures the skier’s movements to detect any upset of balance and will inflate in less than 100 milliseconds before the skier hits the ground.

What’s more, the protection system analyzes the skier’s data to help them understand their movements and boosts protection for the next time.

When you can buy it: For now, the company says the vest is reserved for professional skiers, but it will be available in stores by July 2016.

8. Fashion and function for Fido

This sweet bow tie for your dog is an activity tracker to kick lazy pooches into shape #CES2016 @WonderWoof pic.twitter.com/54qjIYThsw

What is it: Fashionable fitness tracking for your pet. Finally.

The WonderWoof BowTie is a Bluetooth-connected device that attaches to a collar and tracks your pet’s activity level and recommends how much exercise they should get based on their breed, size and age.

The companion app also connects dog owners with others in the area.

How much it costs: For $95, you can choose between six colors.

When you can buy it: It’s out now, available for purchase on the company’s website.

9. A closet that lets you skip the dry cleaners

What it is: The ultimate addition to your closet.

The LG Styler is essentially a cupboard that steams your clothes at home. Once switched on, the closet fills with hot steam and vibrating hangers gently shake back and forth to remove wrinkles and deodorize the clothing. There’s even a built-in trouser press that helps keeps pant creases crisp.

LG says the hot steam spray technology, the same used in its washers and dryers, gets rid of 99.9 percent of germs and bacteria and eliminates 92 percent of the chemicals that are commonly left on clothes after being traditionally dry cleaned.

Ideally, the company says it’d like to see the product installed in places outside the home too, like hotels, airport lounges, beauty salons, offices and restaurants.

When you can buy it: It’s currently available for sale on several consumer electronics and appliances websites.

10. A device that grows hair 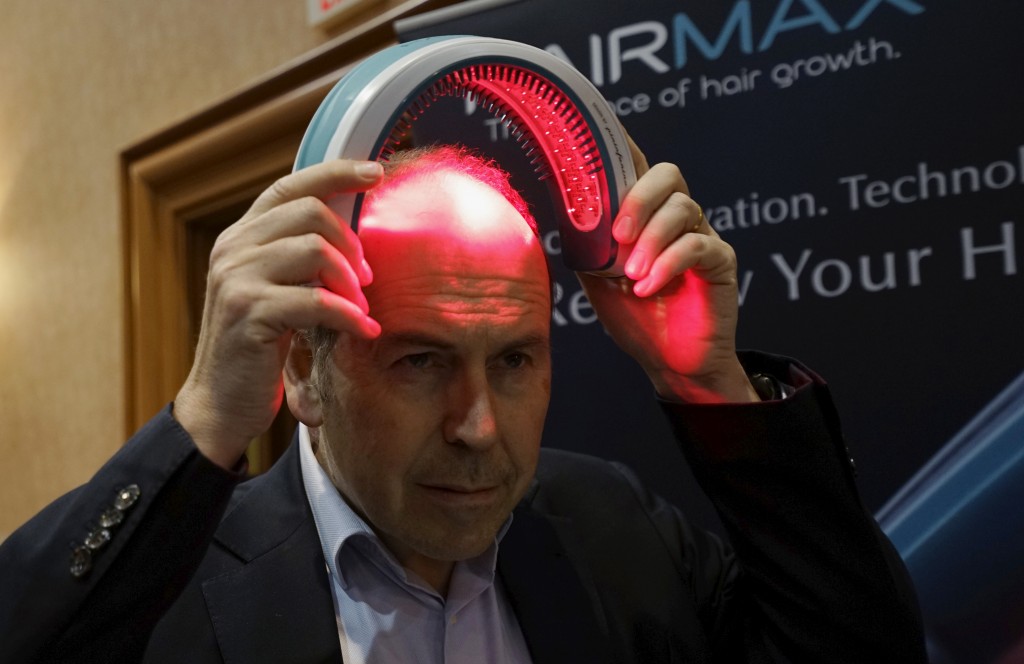 What it is: The fastest laser treatment for hair loss available.

The HairMax Laserband is a headset that claims to simulate new hair follicle growth by increasing blood flow to the scalp. The device pulses 82 lasers in 90-second intervals to reduce thinning of the hair, and in some cases, even encourage hair to thicken.

When you can buy it: It’s currently in-stock on the company’s website.

Left: Attendees watch the video wall display at the LG booth at CES 2016 at the Las Vegas Convention Center on January 6, 2016 in Las Vegas, Nevada. Photo by David Becker/Getty Images