Warning: The content below may be disturbing to viewers. Discretion advised.

A 17-year-old was left bloodied and injured after an encounter with Troy, Alabama, police officers on Christmas Eve. The Troy Police Department asked for an independent investigation into the case after the teen’s family released photos of him badly bruised on social media.

Wilkerson’s mother posted a photo of her beaten son to Facebook, saying he had to be transported to a hospital for surgery. “Please share this,” Angela Williams wrote, “shit happening in Troy Al now.” 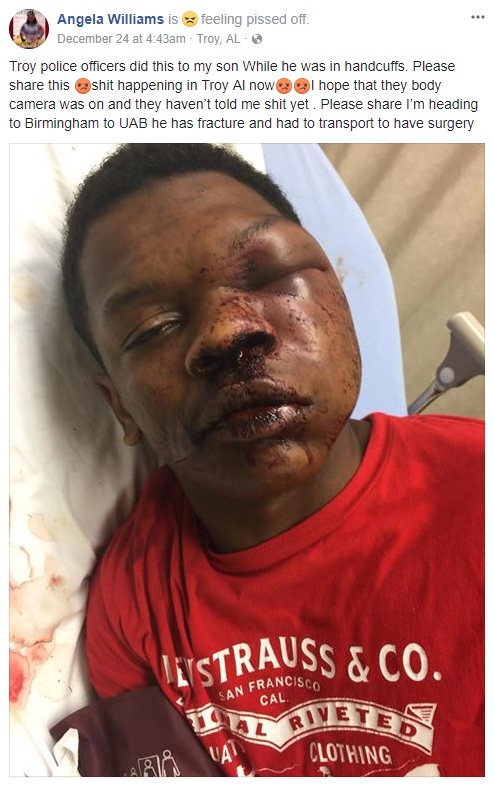 The boy’s mother Angela Williams posted a bloodied image of Ulysses Wilkerson after his encounter with Troy police officers on Dec. 23.

In this initial message, she said Troy police officers had yet to explain what fully happened during the arrest. As of Thursday, days after the incident, more than 80,000 people had shared the image on Facebook.

Ulysses Wilkerson Jr., the teen’s father, told WKRG that his son “had trauma to the brain, swelling on the brain, and a cracked eye socket in three different places.”

Since the case has gained national attention, civil rights activists plan to stage a demonstration outside the police department on Dec. 30, the Rev. Al Sharpton posted on Facebook.

Troy police said excessive force was used after the boy, Ulysses Wilkerson, resisted arrest, according to local TV station WSFA. Officers, who have yet to be officially identified, approached Wilkerson around 11:52 p.m. Saturday as he walked behind a closed business.

Wilkerson fled when officers left their squad car to approach him, and, once apprehended a few streets over, refused demands to put his hands behind his back, police said. Physical force was then used when the teen reached for one of the officers’ waistband, as if attempting to grab a gun, police said. The officer did not have a gun during the arrest.

When asked for more details about the encounter, the Troy Police Department referred the NewsHour to the Alabama State Bureau of Investigation.

In a statement, the bureau confirmed the arrest occurred around Madison Street minutes before midnight on Dec. 23. Lt. Heath Carpenter said “the juvenile was injured” during the arrest and was transported to Troy Regional Medical Center for injuries. He was then later transported to the University of Alabama Medical Center in Birmingham, and has since been released.

The statement also said Troy police chief Randall Barr asked the SBI to “conduct an independent investigation into the use of force by his officers.” SBI approved that request and “immediately responded to Troy, conducting interviews and collecting evidence.”

It’s not immediately clear whether the officers involved have been put on leave or terminated, and the Troy Police Department has not publicly released dash or body cam footage of the encounter.