2 BILLION Royal Wedding Viewers? Was It or Wasn’t It? 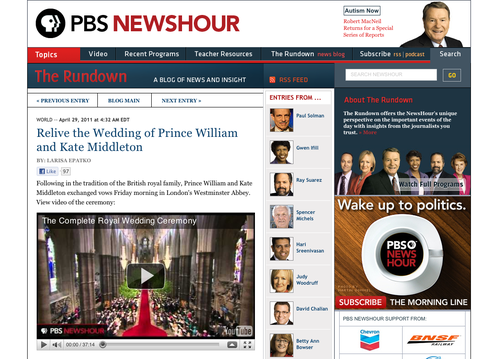 While I was one of the few who enjoyed a complete night’s rest and did not wake in the wee hours of the morning to see the marriage of a couple in England — and one of the few who survived the incessant onslaught from every wire service, cable channel and website (including the NewsHour’s website, for the record) about the “news” — something at the end of the day has finally snapped me to attention.

A culture minister for the British government said in early April that two billion people would watch the wedding of Prince William. Today, as if gospel, one media outlet after another after another repeated that claim with no additional sources of how that number could be justified. Let’s do some back of the napkin math, shall we?

So if we are to believe this claim, that means more than one in four humans on earth watched the wedding. OK, let’s say every man woman and child in Europe watched. According to the U.N., the European population is estimated to be roughly 732 million. Great – let’s whip up the rest.

Can’t you imagine the villagers in India and China and Latin America and Africa all clamoring together around a television, leaving their fields to till themselves — yes yes, let’s add 100 million from each. Great, let’s raise that scoreboard up to almost 1.2 billion.

How about the traffic snarls as people stopped in their cars to watch big screens in city centers from Melbourne to Mumbai, let’s go ahead and say another 500 million people watched that way – bringing our completely ludicrous total to 1.7 billion. Surely the U.S. can put us over the top right? We have a population of more than 300 million. Surely two out of every three people in the country watched right? That’s another 200 million. I’m sure you woke up and watched … didn’t you? And don’t leave out Canada – let’s throw in all of their 34 million people.

So we did it, assuming every man, woman and child in Europe, 400 million villagers who were derelict in their duties, another 500 million who filled their respective Times Squares, the entire population of Canada and then the good old U S of A where two out of every three of us showed our pre-revolutionary colors: We’ve nearly reached 2 billion.

Seriously? Are we that enamored about creating spectacle, about creating fictitious records that break previously unsubstantiated ones? Do we really want that badly to have firsts, and mosts so much so we can take pleasure in saying – “I was there when” or is it simply a justification for this type of over-the-top coverage. The larger the unsubstantiated viewership, the easier it is to justify the satellite trucks and the hotel rooms?

The PBS NewsHour streamed the event early Friday morning and we know through our partners at UStream that more than 500,000 unique users checked out the stream for an average of 17 minutes. Those are people that were tethered to some sort of device that reached out and touched our content. That is a fact, not an estimate that I would like to be true. The television ratings companies in the United States will probably release numbers soon that will spell out how commercially successful it was for television networks to send their small armies to camp outside an abbey.

I’m not disputing that it was of interest to many people, I’m not claiming that I know how many people watched in total, I’m just wondering what the rush is to trumpet a speculation as fact. We will see what the facts bear out in the days ahead.

According to the World Health Organization about 2.6 billion people lack an improved latrine, and 1.1 billion have no access to clean drinking water. Those seem to be estimates based on research, not speculation, and not marketing to promote an event. I feel comfortable reporting that because I consider the WHO a fairly credible source.
I also think these facts are “newsworthy.”

Someday perhaps as many people will pay as much attention to them as to a guest list, a wedding, a carriage, a kiss.