‘Through this door is horror’: Opening statements begin in theater shooting trial

Prosecutors and defense lawyers made their opening statements Monday at the trial of Holmes, who opened fire and killed 12 people at a suburban Colorado movie theater, nearly three years ago.
District Attorney George Brauchler held up a photo of the back door of the Aurora movie theater.

“Through this door, one guy who thought as if he had lost his career, lost his love life, lost his purpose, came to execute a plan,” Brauchler said, before playing a recording of a 911 call from the theater. The call was punctuated with screams.

Brauchler keeps referring to defendant as "this guy." #theatershooting

After a jury selection process that whittled down a record 9,000 summons to 12 jurors and 12 alternatives, the trial will determine, among other questions, whether Holmes was, as his lawyers said, “in the throes of a psychotic episode.”

“By the time Holmes stepped into theater, his perception of reality was so skewed, he no longer lived in the same world we live in,” public defender Daniel King said in his opening statement. “But to him, it seemed as real as this seems to you right now.”

Prosecutors have filed 166 charges against Holmes, including 24 counts of murder and 140 counts of attempted murder. Judge Carlos A. Samour Jr. reminded the jury Monday that Holmes pleaded not guilty by reason of insanity to all of them. Under Colorado law, the burden lies with prosecutors to prove beyond a reasonable doubt that he was not insane, the judge said. 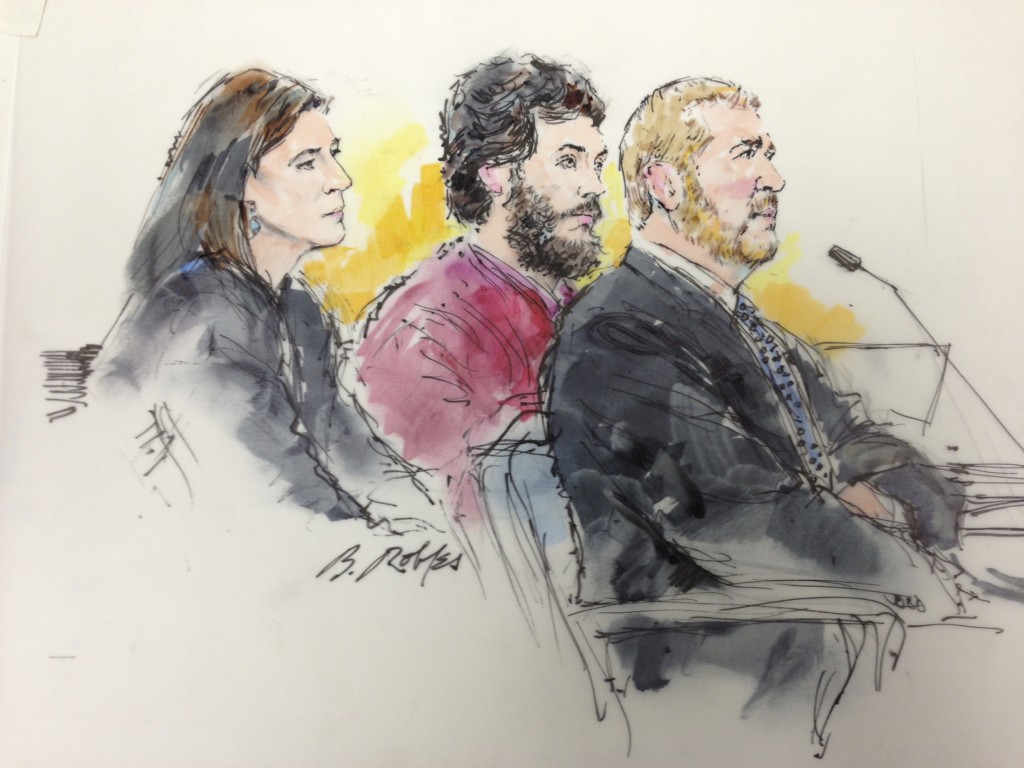 Colorado shooting suspect James Holmes (C) and his public defenders Tamara Brady (L) and Daniel King (R) are pictured in a courtroom sketch during a hearing in Centennial, Colorado April 1, 2013. Prosecutors in Colorado will seek the death penalty for accused movie theater gunman James Holmes for killing 12 people at a midnight showing of the Batman film, “The Dark Knight Rises” in 2012. Photo by Bill Robies/Reuters

On July 20, 2012, Holmes attacked a midnight screening of the Batman film, “The Dark Knight Rises” at a Century movie theater. The shooting claimed 12 lives and injured another 70 people. The Denver Post reported that as many as 400 people attended that night’s showing.

Holmes’ lawyers acknowledge that Holmes was the shooter, but also maintain he was suffering a psychotic episode during the shooting. At this time, five mental health experts are expected to take the stand to offer their evaluations over Holmes’ sanity, The Denver Post reported.

For the next several months, the jury will decide whether Holmes was guilty of the mass shooting. And athough Holmes’ lawyers have tried to avoid the death penalty, prosecutors continue to pursue it as an option for the jury.

The Denver Post is live blogging developments from the Arapahoe County Justice Center as the Aurora theater shooting trial begins.