Out of 30,000 Hollywood film characters, here’s how many weren’t white

Viola Davis’s historic Emmy win served as an important milestone for African American actresses this week, but data suggest that the entertainment industry could do far more to achieve greater diversity in film.

Researchers at the University of Southern California studied the 700 top-grossing films from 2007 to 2014, excluding 2011, and analyzed the race and ethnicity of more than 30,000 characters to reveal diversity in film. The findings showed that for nearly a decade, filmmakers have made virtually no progress in portraying more characters from non-white racial and ethnic identities.

Of the top 100 films of 2014, nearly three-quarters of all characters were white, the study showed. Only 17 of the top movies that year featured non-white lead or co-lead actors.

Roughly Three-Quarters of Film Actors Were White in 2014 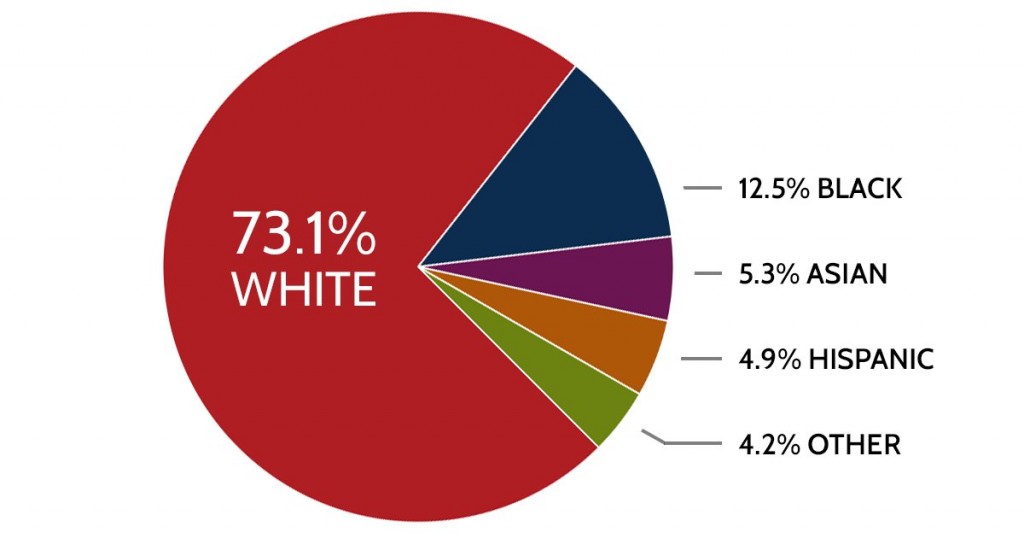 Findings like these come as no surprise to British blogger and writer Nikesh Shukla. Inspired by the Bechdel test that illustrates gender diversity in film, he created the Shukla Test in 2013 to indicate racial and ethnic diversity of characters and how they are portrayed on screen.

“I realized that white people think that people of color only have ethnic experiences and not universal experiences.” — Nikesh Shukla
He felt compelled to do this after he wrote a short story that a literary blog reviewer enjoyed but criticized because Shukla included South Asian names that the reviewer found “hard to follow.”

“I realized that white people think that people of color only have ethnic experiences and not universal experiences,” Shukla said. “That really annoyed me. I’m not just eating mangoes all the time with my aggressive mother.”

Achieving greater diversity in film and television is about more than just putting non-white faces on the screen, Shukla said. How the entertainment industry portrays these characters is just as important.

“It feels like it’s a celebration of otherness. I want my otherness normalized,” he said.

Left: Actress Viola Davis holds the award for Outstanding Lead Actress In A Drama Series for her role in ABC's "How To Get Away With Murder" during the 67th Primetime Emmy Awards in Los Angeles, California. REUTERS/Mike Blake -