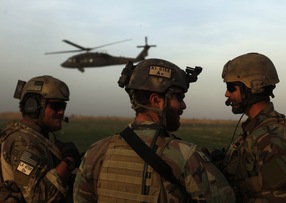 Updated 8:00 p.m. ET | The U.S.-led coalition said in a statement that 30 American service members, a civilian interpreter and seven Afghan commandos were killed in the helicopter crash early Saturday.

Posted 2:28 p.m. ET | A military helicopter crashed in eastern Afghanistan, killing all 31 Americans and seven Afghan commands on board, making the incident the single biggest loss of life for U.S. forces since the war began in 2001.

It was widely reported Saturday that the craft was believed to have been brought down by insurgent fire. The Taliban claimed they downed the Chinook transport helicopter with rocket fire while it was taking part in a raid on a house in the province of Wardak.

In a statement, NATO would not confirm the cause of the crash, but did indicate that there was “enemy activity” in the area:

“An International Security Assistance Force helicopter crashed in eastern Afghanistan today, and recovery operations are underway. ISAF is still in the process of assessing the circumstances to determine the facts of the incident, reporting indicates there was enemy activity in the area.”

Several media organizations, including the Associated Press and the New York Times, quoted unnamed officials as saying that the U.S. causalities including members of a Navy SEAL unit.

“My thoughts and prayers go out to the families and loved ones of the Americans who were lost earlier today in Afghanistan,” the president said in his statement.

“Their deaths are a reminder of the extraordinary sacrifices made by the men and women of our military and their families,” the president continued, “including all who have served in Afghanistan.”

“We will stay the course to complete that mission, for which they and all who have served and lost their lives in Afghanistan have made the ultimate sacrifice,” Panetta said in his statement.

Afghan President Hamid Karzai sent his condolences to President Obama, according to a statement issued by his office.

For more on the Afghan conflict, revisit our Afghanistan: 10 Stories, 10 Years feature.