Guys, the election is less than 24 hours away.

And now, we have musician Sheryl Crow pushing a Change.org petition — with more than 60,000 signatures strong — calling for a shorter election cycle in the U.S. Announcing her petition last week, Crow said Americans couldn’t sustain another “lengthy slugfest” like the 2016 campaign.

Canadians had similar feelings about their 2015 campaign season, considered to be one of the longest in the country’s history. It was 11 weeks. For us, we’ll clock in at more than 85 weeks by Nov. 8.

There’s a new facepalm emoji for this year.

Or, maybe you agree with Doyle McManus of The Los Angeles Times, who suggests that we lengthen the campaign season? That said, his column was written before the FBI cleared Hillary Clinton — again — in the ongoing email saga.

Either way, Clinton and Donald Trump made their closing arguments to the American people in USA Today. Whether you vote for a “stronger, fairer America” or to “Make America Great Again,” take the time to review these five important stories that didn’t get the same Page 1 treatment.

1. The battle for Raqqa, the “administrative capital” of the ISIS caliphate, begins 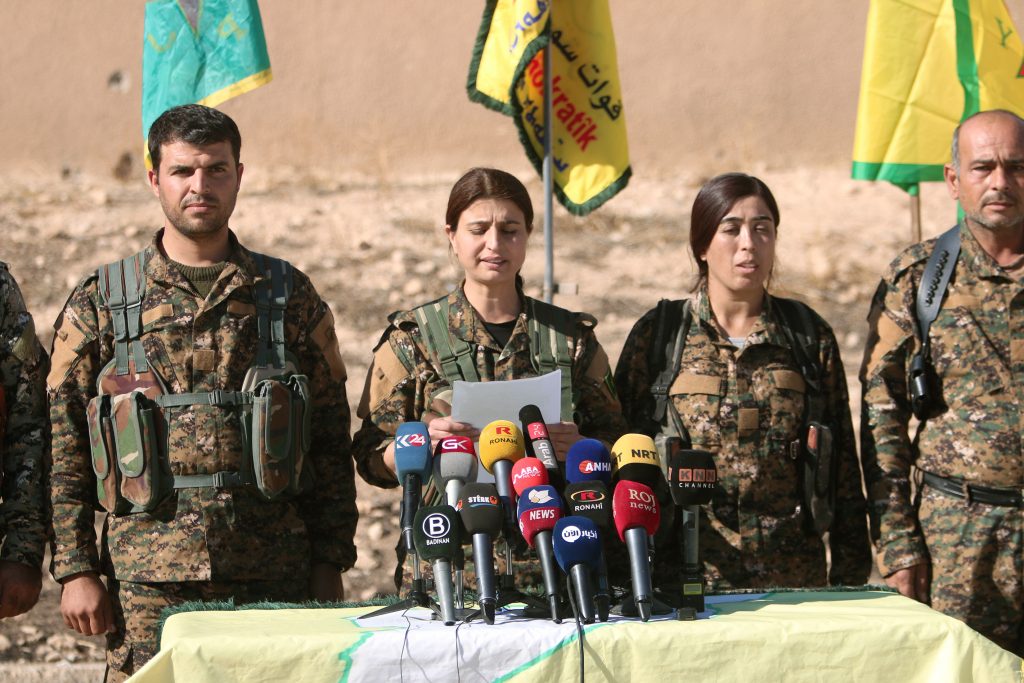 Three weeks into the campaign to retake Mosul, Iraq, from Islamic State militants, forces of the U.S.-led coalition launched a second offensive against another ISIS stronghold in neighboring Syria.

Over the weekend, Syrian Democratic Forces (SDF) announced the campaign to liberate Raqqa, the epicenter of ISIS’s self-declared caliphate when the militants seized it in 2014.

The campaigns against ISIS in both Iraq and Syria were coordinated partly because “of concerns that any delay would allow Islamic State to use it as a base to launch attacks on targets abroad,” Reuters reported.

Special presidential envoy Brett McGurk told the NewsHour last week that Iraqi forces broke through the “outer crust” of ISIS’s defenses in Mosul, but also cautioned that the multi-month operation will take time.

As the Iraqi military continues its push into the Islamic State-stronghold of Mosul, how are the disparate forces who make up the coalition working together, and how does Iraq plan to stabilize the city and prevent ethnic tensions? Special presidential envoy Brett McGurk talks with Hari Sreenivasan about the operation to retake the city.

“We’re not only focused on the operations to win the military battle, but also on what comes next,” McGurk said. “That’s really about getting people back into their homes, returning the internally displaced people to their homes,” he added.

McGurk also said that this type of stabilization will be “extraordinarily difficult.”

“If you look historically in a context like this of how long it’s going to take, it can take years, if ever,” he said.

Two weeks into their offensive, Iraqi troops crossed the city limits of Mosul, the last Islamic State stronghold in Iraq. Special correspondent Christopher Livesay filed this report as troops moved in, civilians fled and the Islamic State fighters showed they weren’t giving up without a fight.

On Raqqa, McGurk said the U.S. planned to work with the SDF and other coalition forces on the ground to recapture the “administrative capital” of ISIS. However, the SDF include Syrian Kurds known as the People’s Protection Units, or YPG. Turkey, a NATO member, considers the SDF a terrorist organization, making the Raqqa assault a politically fraught endeavor.

McGurk said the U.S. was “very determined to make sure that we are totally transparent with Turkey with every single thing we are doing in Syria,” adding that they try to encourage a “united focus” on ISIS.

2. After the lewd ‘scouting report’ at Harvard, the men’s cross country team says it kept a spreadsheet 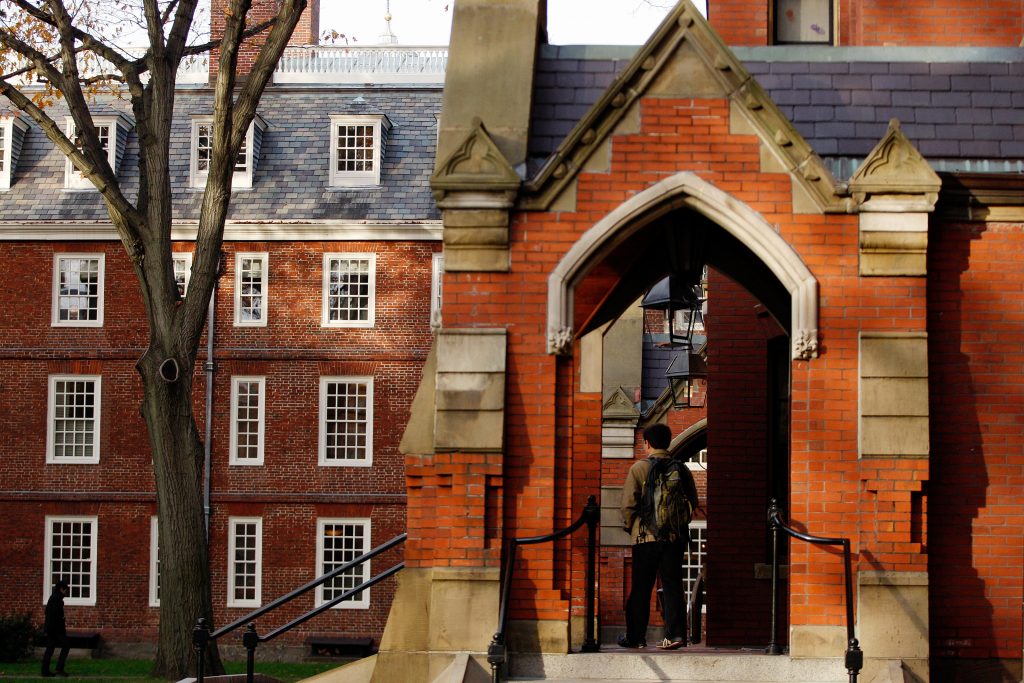 A student stands in the entranceway of a building at Harvard University in Cambridge, Massachusetts. Photo by Jessica Rinaldi/Reuters

In October, The Harvard Crimson obtained documents from a 2012 “scouting report,” in which the Harvard men’s soccer team lewdly ranked the physical appearances of the women’s team members.

Eventually, the university decided to cancel the team’s season, after officials found out that the report continued past 2012.

“I have asked that it at least be raised as a question: is this wider spread?” she said.

Now, the men’s cross country team has come forward to say that they kept a yearly spreadsheet that contained similar comments about the women’s appearances, the student newspaper reported.

In an email chain obtained by the Crimson, the men’s cross country captain Brandon E. Price asked the team to “come clean with anything that we have typed down in the past.”

“We don’t want the school to find this, without us first bringing it to them,” Price wrote. “The problem with the Men’s Soccer team was they tried to hide their stuff.”

Faust had said in a previous statement that the decision to cancel the season was driven partly by the soccer team’s “failure to be forthcoming when initially questioned.”

As the scandal gained traction, several of the women named in the 2012 “scouting report” penned an op-ed in the Crimson, saying they’ve come to “expect this kind of behavior from so many men, that it is so ‘normal’ to us we often decide it is not worth our time or effort to dwell on.”

“We are concerned for the future, because we know that the only way we can truly move past this culture is for the very men who perpetrate it to stop it in its tracks,” the women wrote. 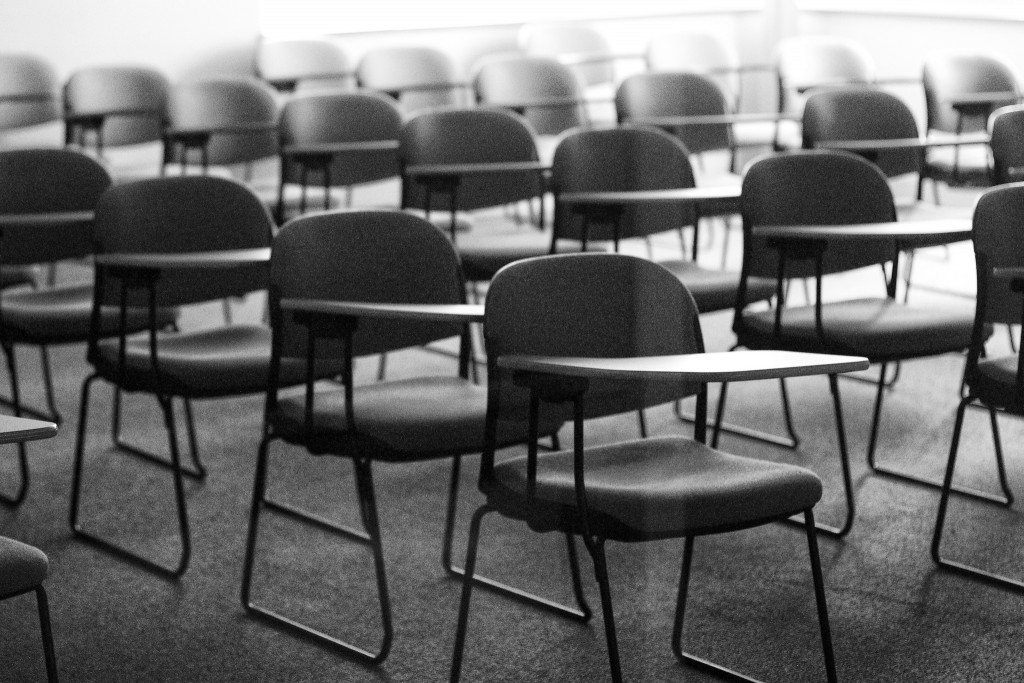 Suicide rates for middle school-aged children in the U.S. have doubled from 2007 to 2014, according to a new figures from the Centers for Disease Control and Prevention. 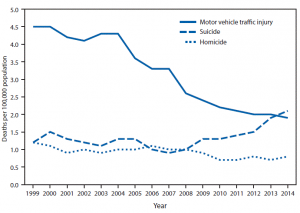 As shown by the CDC, the suicide rate for middle school students, aged 10 to 14, has spiked in recent years and is now high enough to eclipse the rate of deaths in car crashes for that age group. There were 425 reported deaths by suicide in 2014, while 384 died in car crashes.

In 1999, the rate of deaths from car crashes was four times higher than the suicide rate for middle school students, the CDC reported.

NPR, who has been reporting on how schools deal with students’ mental health, explained that a prevailing myth is that children don’t kill themselves.

Children as young as five years old have died by suicide every year, NPR pointed out. David Jobes, the head of Catholic University’s Suicide Prevention Lab, walked through several other misconceptions about suicide. Read about them here or watch the Facebook Live below:

Six myths about suicide that every educator and parent should know. Dr. David Jobes from the Suicide Prevention Lab at Catholic University discusses these common misconceptions with NPR Ed's Elissa Nadworny. http://www.npr.org/sections/ed/2016/09/02/478835539/6-myths-about-suicide-that-every-educator-and-parent-should-know

“Kids spend a lot of time at school … it’s where they live their lives,” Jobes told NPR. “Suicide prevention has been focused on schools for a long time because it’s a place where kids are and where a lot of problems can manifest,” he said. 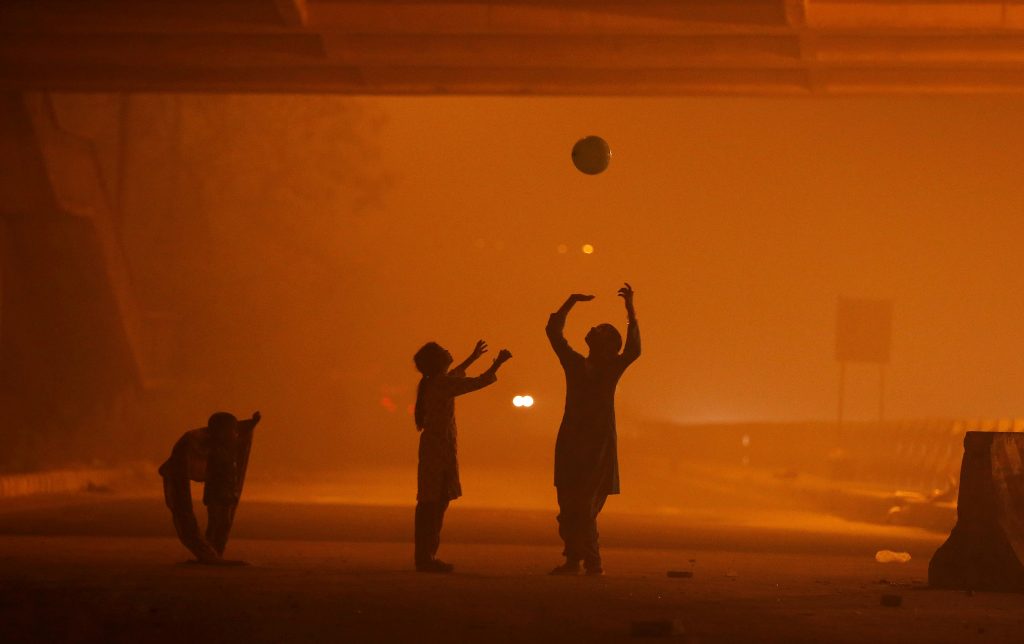 Girls play with a balloon under a flyover amidst the heavy smog in New Delhi, India. Photo by Adnan Abidi/Reutes

The New Delhi-based Centre for Science and Environment said that the air quality in India’s capital last week has been the worst in 17 years.

In response, Delhi Chief Minister Arvind Kejriwal closed more than 1,700 schools for three days due to the toxic levels of air pollution in the city. Other emergency measures included a temporary halt of construction and coal-driven operations, in an effort to minimize the release of harmful pollutants into the air.

“Pollution has increased to an extent that outdoors in Delhi are resembling a gas chamber,” Kejriwal told reporters Sunday.

Levels of particulate matter for New Delhi have registered dangerous levels on the daily Air Quality Index, or AQI. As of today, PM10 and PM2.5 pollutants hit 808 and 622 respectively on the index, far exceeding the “severe” level set at 500.

When air quality is at severe levels, the particulate matter can penetrate the lungs and enter the bloodstream and has been linked to premature deaths and can cause cardiovascular and respiratory diseases, and cancers, according to the World Health Organization. 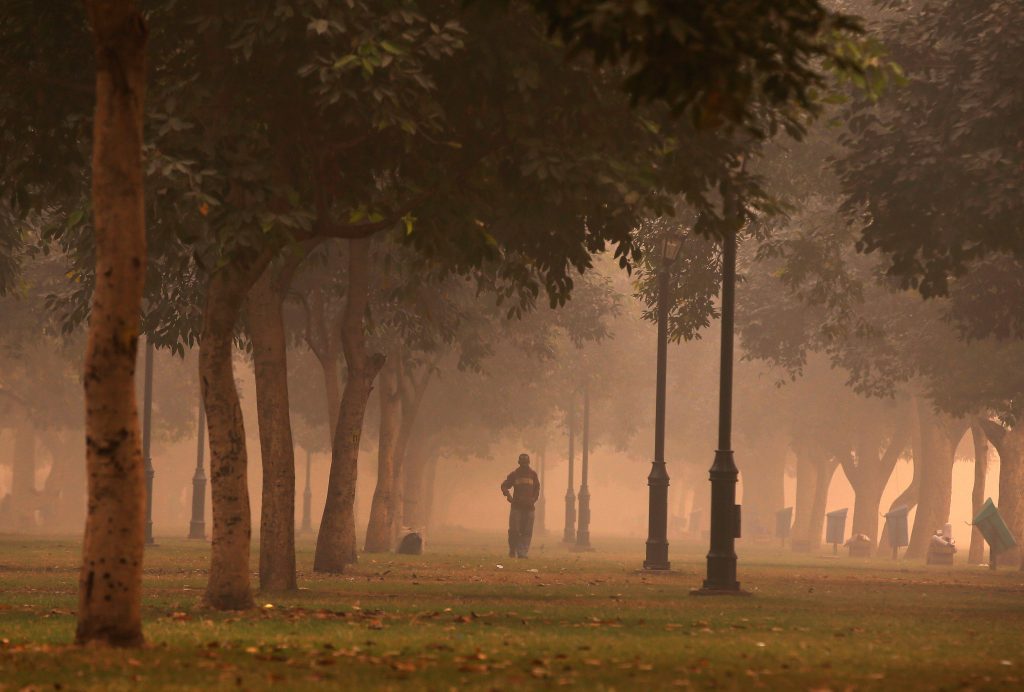 A man walks in a public park on a smoggy morning in New Delhi, India. Photo by Adnan Abidi/Reuters

As The Guardian pointed out, a 2015 study found that nearly half of Delhi’s 4.4 million schoolchildren sustained permanent lung damage after being exposed to the harmful air pollution.

Delhi’s bout with toxic air came at a time when UNICEF also released a report last week that found that one in seven children around the world breath air that far surpass WHO standards. And, for children, air pollution poses a greater danger.

“Children breathe twice as quickly as adults, and take in more air relative to their body weight,” UNICEF said in its report. “Their respiratory tracks are more permeable and thus more vulnerable. Their immune systems are weaker. Their brains are still developing.”

5. The Cubs won, but read this postscript 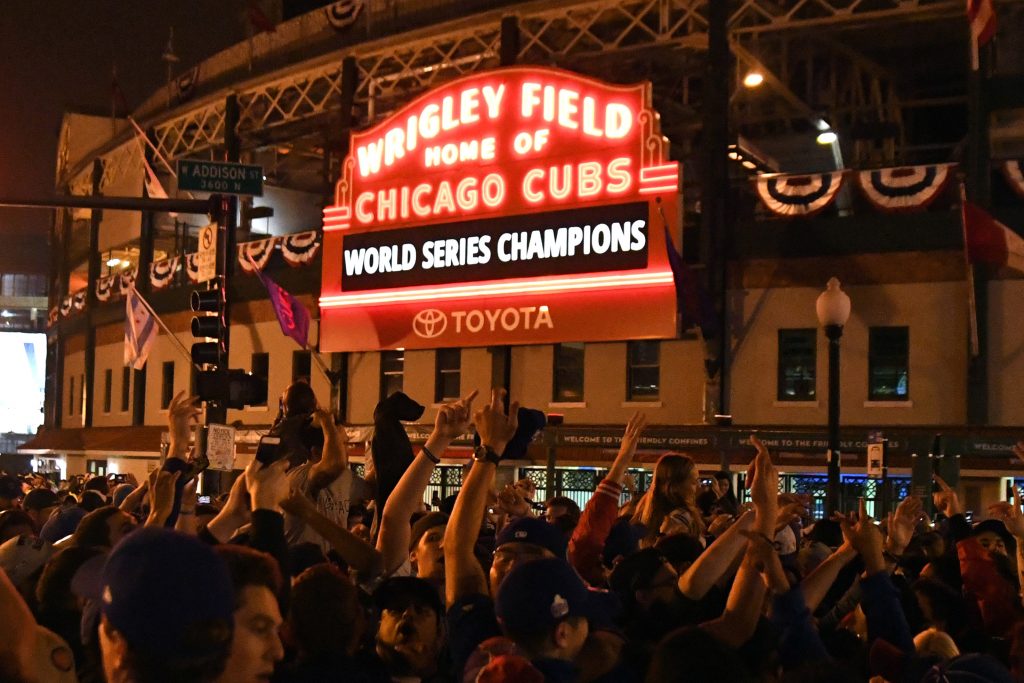 Chicago Cubs fans celebrate after Game 7 of the 2016 World Series against the Cleveland Indians outside of Wrigley Field. Cubs won 8-7. Photo by Patrick Gorski/USA TODAY Sports

Unless you watched the Beyonce-Dixie Chicks CMA performance ad nauseam last week (when you could find it), the Chicago Cubs beat the Cleveland Indians last week to win their first World Series in 108 years.

The Cubs’ historic win was not underreported. The stories and images that immediately followed the winner-take-all game captured a city enraptured by a win that shed decades of heartbreak. There was the crowd gathered around the Wrigley Field neon sign announcing the win. Later, the victory parade and rally attracted a reported 5 million people. If true, it’s the 7th largest gathering in human history, or something. 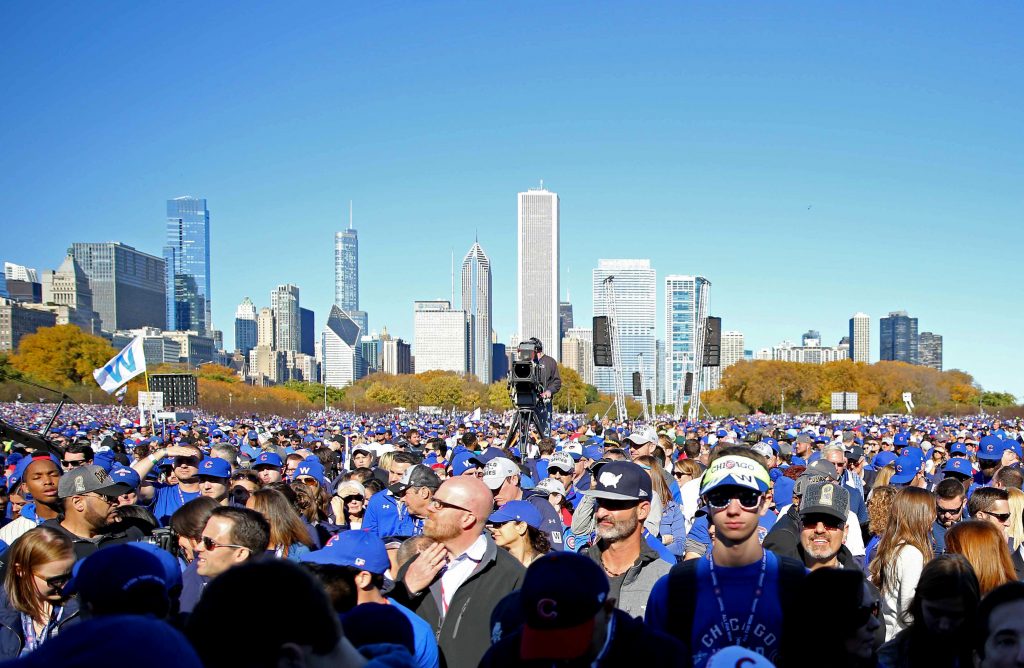 A general shot of the Chicago Cubs crowd during the World Series victory rally in Grant Park. Photo by Dennis Wierzbicki/USA TODAY Sports

There was team manager Joe Maddon wearing a “We didn’t suck” T-shirt. There was the man who drank his 32-year-old Coors beer, which he saved until the Cubs won the World Series. And then there were Bill Murray’s tears.

People also wrote messages in chalk on a brick wall outside of Wrigley Field. ESPN’s Wright Thompson watched as a boy wrote “Go Cubs Go” on the memorial wall, but that display of joy was only part of the story, the reporter wrote.

Walked by Wrigley Field earlier today and saw this guy just staring at the wall for the longest… Bring that chip back to Chicago @Cubs pic.twitter.com/Dhn5H90yH4

“The hyper-focus of camera lenses will make the last 24 hours in Chicago seem like one big explosion of joy, but that’s not really true,” Thompson wrote. “[T]here’s also this palpable sadness. Nobody could really be sure how’d they’d feel when it all ended, whether they’d be full of joy, or grief, or both.”

Nearby, Thompson also saw a woman wrote a personal message on the metal gates. It read: “Mom, thank you for teaching us to believe in ourselves, love and the Cubs. Enjoy your view from the ultimate skybox.”

Thompson soon learns that the woman’s mother died between Games 2 and 3. Read the full story here, where Thompson hops around Chicago, including a visit to late broadcaster Harry Caray’s grave, amid the post-World Series celebration.

As a friend said on Facebook: “An article so good, I forgot that I don’t like baseball.”