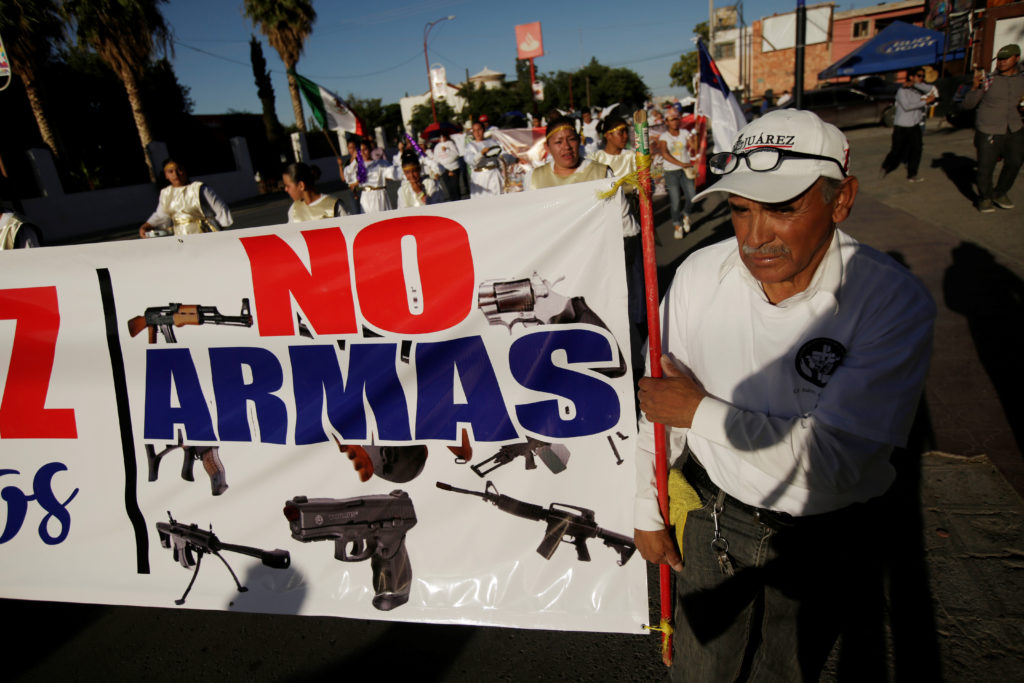 Protesters hold a banner reading ‘No Weapons” during a march for peace and against violence in Ciudad Juarez, Mexico June 23, 2018. Brazil tops the global list for murders, breaking a record last year with a total of 63,808, followed by Venezuela, Mexico and Colombia. REUTERS/Jose Luis Gonzalez

More than 400 people are murdered daily across Latin America, a crisis fueled by drugs, poverty, lack of social programs, laissez-faire law enforcement, urbanization and government corruption, The Wall Street Journal reported in a deep dive last week. Less than 20 percent of murders in all of Latin America are ever solved, it said.

Brazil tops the global list for murders, breaking a record last year with a total of 63,808, followed by Venezuela, Mexico and Colombia.

The Wall Street Journal points to the Mexican resort town of Acapulco ashas become an epicenter of that nation’s drug-related violence. International tourism brought money to the beach town, but that same wealth ushered in organized crime. The Wall Street Journal quoted one longtime resident who said the only prosperous businesses are funeral homes, given the alarmingly high murder rate.

Mexican President-elect Andrés Manuel López Obrador (known as AMLO), who takes office in December, has promised an end to his country’s drug war — a major split from U.S. policy — in hopes of reducing violence. Cocaine, made almost exclusively from a plant grown in Latin America, remains one of the world’s most profitable drugs, while the largest importer of illegal drugs, the U.S., is located just north. [The Wall Street Journal]

Why it matters: Violence and black markets hurt local economies, adding financial exigency to the equation.The epidemic of deadly violence also has profound implications for the U.S. Experts said more crime could be more motivation for people to seek safety in America..

Misael Ponce Herrera, a 32-year-old Honduran man who tried to cross the border illegally with his daughter, told the PBS NewsHour’s Yamiche Alcindor that he has tried several times to enter to the U.S. to escape poverty and violence.

“In a month, there were five deaths around here. Children see that. They hear about these things,” Ponce Herrera said. “All these things make us leave in search of new horizons.”

That attempt backfired when he was separated from daughter Marianita and he signed deportation papers hoping to be reunited. After the 6-year-old girl spent three months in a children’s facility in New York, the family was reunified last week. While Ponce Herrera expressed remorse for the outcome of his decision, there are thousands more who continue to try.

2. Iowa farmers could lose up to $2 billion in the U.S.-China trade war, a threat that could have ripple effects across the state 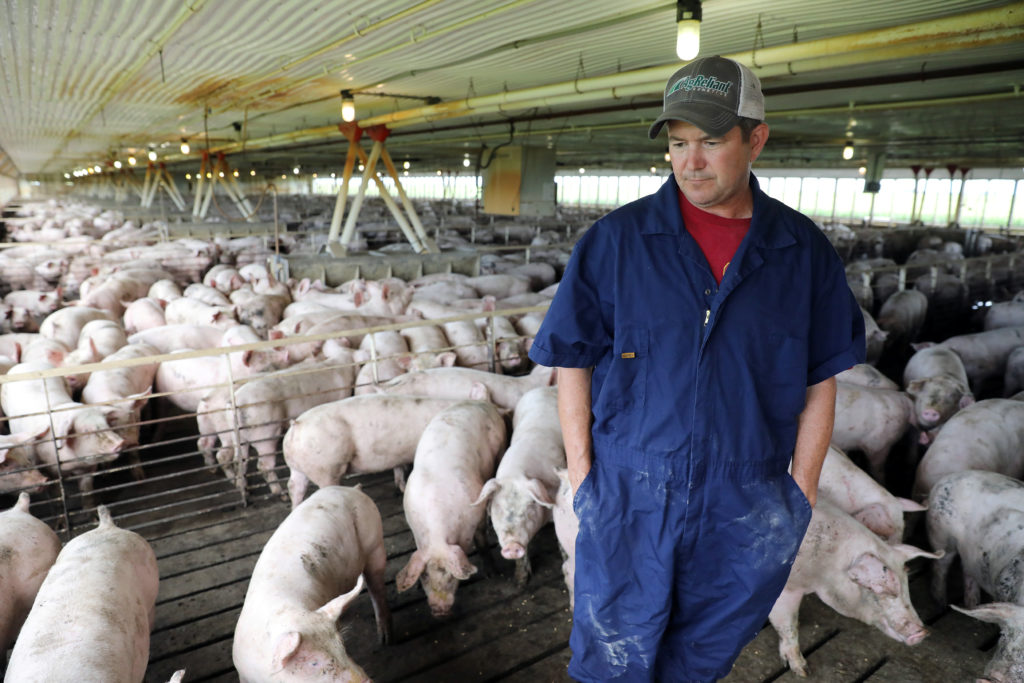 Farmer Bruce Wessling walks through a barn with 2400 four-month-old pigs in a finishing barn at Wessling Farms near Grand Junction, Iowa, U.S., July 5, 2018. Farmers in Iowa could lose between $1 and $2 billion in revenue as a result of the United States’ ongoing trade disputes with China, Canada and other countries, a new study by Iowa State University has found. REUTERS/Scott Morgan

Farmers in Iowa could lose between $1 and $2 billion in revenue as a result of the United States’ ongoing trade disputes with China, Canada and other countries, a new study by Iowa State University has found.

Iowa’s $7.1 billion pork and hog industry could be hit hardest within the agricultural sector, as that industry is projected to experience an average revenue loss of $776 million, the Des Moines Register reports.

Iowa’s aluminum and steel producers are projected to benefit from the trade wars, however. The study found that those industries could see a $215 million boost because of the higher prices for their products — but not enough to offset the other estimated losses in other industries. [The Des Moines Register]

Why it matters:Iowa is the nation’s second-largest agricultural exporter. It leads the nation in corn, soybean and pork exports, according to the Register. More than 85 percent of the state’s land is used for agriculture.

The revenue losses in Iowa’s agricultural industry could have a damaging a ripple effect on the state’s overall economy.

According to the study, the losses could lead to reduced labor incomes — of anywhere from $245 to $365 million — across the state, and that’s after farmers receive emergency aid from the federal government.

The reduced income could also lead to reduced tax collections. The study projects that the state could lose between $75 million and $110 million in tax revenue even after federal offsets.

The trade wars show no sign of slowing down. On Monday, the U.S. and China imposed their latest rounds of tariffs on each other, affecting thousands of various products worth a combined total of $260 billion.

3. A year after Hurricane Maria, we don’t know the mental health impact on Puerto Rico’s children 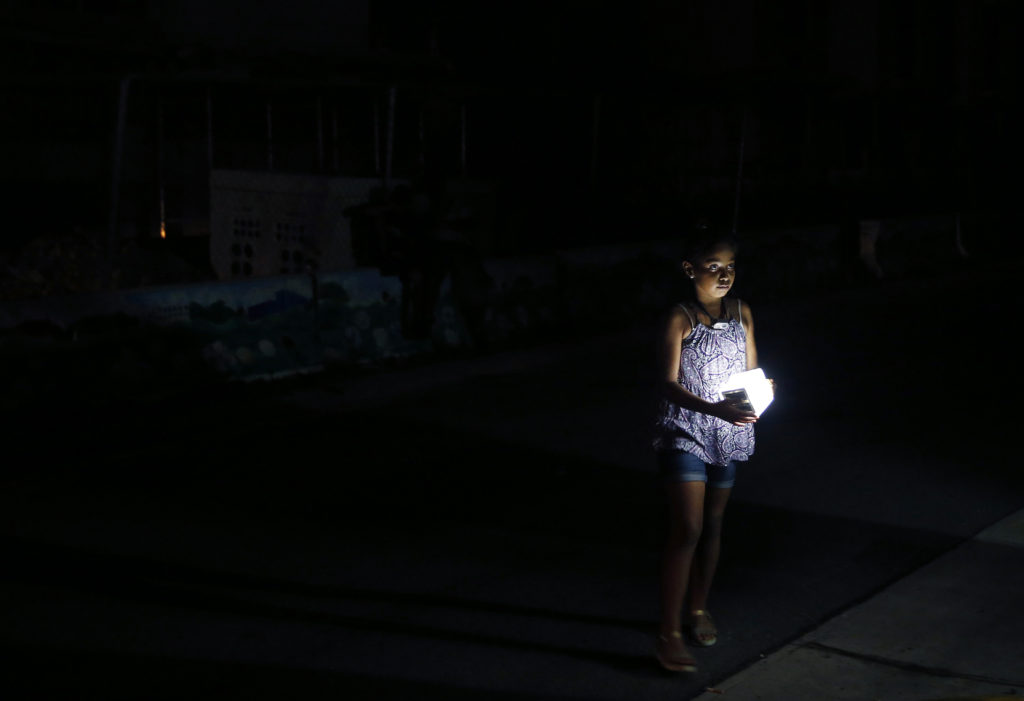 A girl played with a lantern on the street in San Juan, Puerto Rico in October of 2017, as she and her family escaped the heat of her public housing apartment that was still without power. Photo by Jessica Rinaldi The Boston Globe via Getty Images

It’s been a year since Hurricane Maria tore through Puerto Rico, creating widespread and unprecedented damage across the island.

Teachers, residents and child development experts told Santhanam they’re worried about the long-term mental health effects on a generation of Puerto Rican children growing up after Hurricane Maria and what that means for the island’s future. [The PBS NewsHour]

Why it matters: During natural disasters, “kids are at the bottom of the totem pole,” pediatric psychologist Cynthia Garcia Coll said. “We don’t think of their needs systemically.”

“How do you make that up? That’s a real big challenge, and we don’t have a lot of good answers,” he said. “A lot of children are going to be affected in ways that we’re all going to regret.” 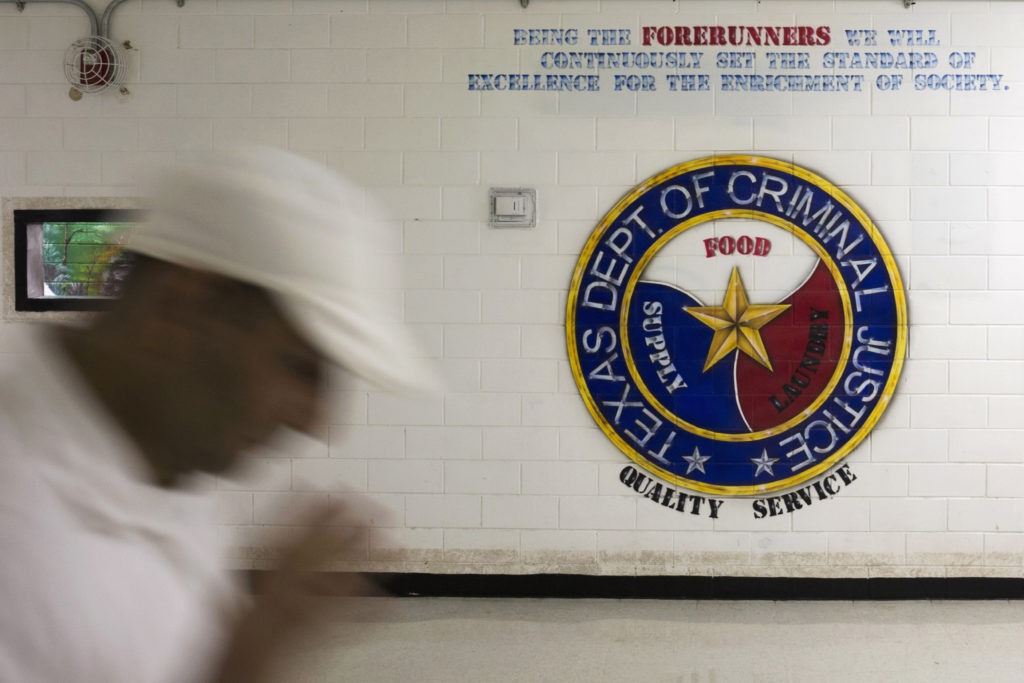 An offender walks past a sign on a wall at the the Darrington Unit of the Texas Department of Criminal Justice men’s prison in Rosharon, Texas. The number of Texas inmates being granted dentures has sharply declined, the Houston Chronicle reported earlier this week. REUTERS/Adrees Latif

The number of Texas inmates being granted dentures has sharply declined, the Houston Chronicle reported earlier this week.

In 2016, medical providers in the state approved just 71 dentures for a Texas prison population of nearly 150,000 inmates. This is a drastic drop from 15 years ago when the Texas prison system gave about 1,000 dental prosthetics to inmates, the newspaper said.

Dr. Owen Murray of the University of Texas Medical Branch told the Chronicle that providers have focused on inmates who “truly have other challenges” that have made having dentures a priority. One example he gives is a patient with cancer, which has affected the structure of their head and neck. The dentures then help preserve the structure in that area.

For another point of comparison, California, a state with a larger prison population, approved 4,800 dental prosthetics in 2016, the Associated Press reported, citing data from the state’s Department of Corrections and Rehabilitation data. [The Houston Chronicle]

Why it matters: The Chronicle reported that the Texas inmates who have requested dentures “have a history of drug use or came from impoverished backgrounds with sub-par dental care to begin with.”

But the state, instead, has denied dentures to inmates with bad or no teeth, citing prison policy that says that chewing isn’t a “medical necessity” because they can be offered pureed meals.

“The community standard for dental care has not been applied to prisons,” adjunct dentistry professor Dr. Jay Shulman of Texas A&M told the Chronicle. Shulman, who had been a witness in lawsuits over dental care in prisons, said inmates without teeth ought to be offered dentures.

Other experts told the newspaper that the lack of dentures for these inmates can lead to other problems in their mental health, create headaches and jaw pain and affect their speech.

Inmates also used to make dentures in-house as part of a prison vocational program, which helped with the production of these prosthetics. But that program was cut for unspecified reasons in 2003, the Chronicle reported.

In other #SCOTUS news: We tell the stories for the first time of the old warriors behind the new legal battle over Maryland’s WWI Peace Cross. https://t.co/agTyunRtsQ … @michaelruane pic.twitter.com/pE2UakUFjP

The fate of a World War I memorial in Bladensburg, Maryland, could be determined by the Supreme Court if it decides to step into a legal battle over whether the monument’s ownership and location are a violation of the separation of church and state.

At issue is a 40-foot cross that sits on public land and honors 49 local servicemen who died during the war.

According to the Washington Post, a federal appeals court recently ruled that the so-called Peace Cross is an unconstitutional government endorsement of religion, characterizing it as a “preeminent symbol of Christianity.”

In March, the Richmond-based U.S. Court of Appeals for the 4th Circuit told the state commission to remove it, reshape it or reassign its ownership. [The Washington Post]

Why it matters:The legal fight has ignited a national debate over the separation of church and state.

Politicians from both parties have pushed backed against the ruling, arguing that if the monument is removed from government land, other memorials with religious features in public spaces could also face a similar fate.

“The decision below calls into question the constitutionality of countless federal monuments, historic places, and national traditions that use a cross or other ‘inherently religious’ symbols or language to commemorate our nation’s history and to reflect values shared by the American people,” said attorneys for a coalition of more than 100 members of Congress.

Monica Miller, an attorney for the American Humanist Association, said in a court filing that the cross “discriminates against patriotic soldiers who are not Christian, sending a callous message to non-Christians that Christians are worthy of veneration while they may as well be forgotten.”

Relatives of the servicemen, however, argue that the cross is a secular tribute that simply protects the memory of the 49 men who lost their lives.

The Supreme Court could decide whether to review the ruling as early as Monday, the first day of its fall term.

Left: A woman and child photograph shoes displayed in memory of those killed by Hurricane Maria, on display in front of the Puerto Rican capitol in San Juan in June, 2018. Photo by Ricardo Arduengo AFP/Getty Images