1. How a 911 call can play out differently for white and nonwhite people

Last week, Anthony Wall was choked by a police officer and shoved against the wall of a Waffle House as he was being arrested. He and his 16-year-old sister had stopped at the Waffle House after going to prom. The police were called after Wall reportedly got into an argument with employees at one of the restaurant’s locations in North Carolina.

Wall, talking with local station ABC11, said he took full responsibility for his argument with the employees, but criticized the police officer’s response.

“Your hands should have never been around my neck like that if my hands were in the air,” he said.

It marks the latest incident fueling reports and discussion about the treatment by police of black people and other minorities, a conversation that was reignited last month after two black men were arrested at a downtown Starbucks in Philadelphia

For instance, in Connecticut, a white student called the police about a black Yale student who was sleeping in the common room of her dorm. Two Native American teens were approached by police after someone reported them being “odd” during a tour of a Colorado university.

These stories underscore a larger pattern of police encounters that have occurred while driving, or walking or shopping at Nordstrom Rack or leaving an Airbnb spot.

Why it matters: The past few weeks — and the encounters that have gotten attention lately — demonstrate how a 911 call can escalate non-emergency encounters differently for white and nonwhite people.

It’s not a new problem, per se, as this social callout from The New York Times for similar incidents demonstrates.

As Errin Haines Whack of the Associated Press wrote, these incidents also “served as a reminder of how vastly different the decision to call 911 is for black and white Americans.”

Georgetown University professor Paul Butler said a call to police for a black person is “always a deliberate decision with a risk of a downside that could be tragic.” This is reflected in some studies that say that African-Americans are less likely to alert authorities for reporting a crime than white people.

2. Seven months after the Las Vegas shooting, has hotel and event security changed? 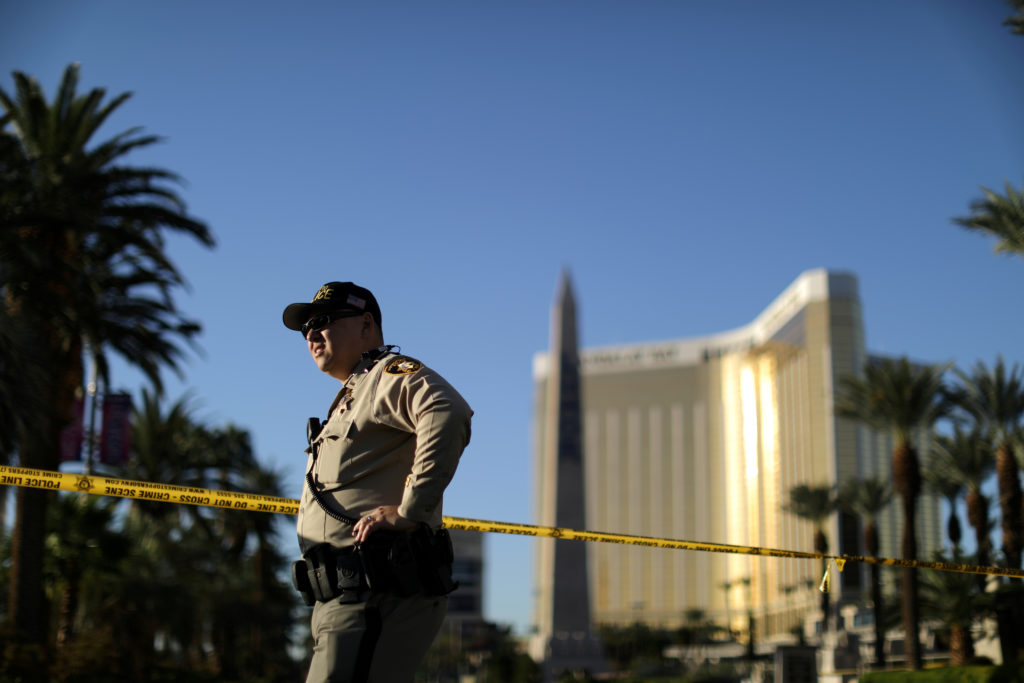 A police officer stands in front of the closed Las Vegas Strip next to the site of the Route 91 music festival mass shooting outside the Mandalay Bay Resort and Casino in Las Vegas, Nevada, U.S., October 3, 2017. REUTERS/Lucy Nicholson.

Just more than seven months ago, a gunman opened fire at an outdoor country concert on the Las Vegas strip, killing 58 people and injuring hundreds.

Now, as summer approaches, the PBS NewsHour’s Rhana Natour talked to hospitality and security experts about what what they’ve learned since the deadly attack, and what hotels and major event venues are doing as concert and tourist season ramps up.

More hotels and venues are increasing security at the door — through guards or metal detectors — and rolling back “Do Not Disturb” policies, which some say allowed the Las Vegas shooter to stockpile weapons and plan his attack, from an 32nd-floor hotel room, for so long.

But challenges still remain. For instance, there are still “no common security standards across the hospitality industry.” Some corporations do have active shooter plans, and many that do involve announcing a “shelter in place.” But one security expert says that’s a “horrible way” to deal with active shooter situations. In the case of Las Vegas, for instance, such an announcement never would have worked: The festival was outdoors, making a single, far-reaching announcement logistically almost impossible. [The PBS NewsHour]

Why it matters: As Natour reports: “These security upgrades are expensive, though the details aren’t clear because information on how much companies spend on security isn’t typically public. And as security costs for hotels and event promoters increase, concertgoers in the U.S. may see slightly higher ticket prices. According to a Bloomberg report, the average safety cost for festivals in France climbed by $15,000 per day the year after the Bataclan attack in Paris. The music publication Billboard reported that security spending for major festivals could increase by $100,000 to $250,000 per festival in 2018. This should only translate to a minor increase in ticket prices though: a $2 to $5 increase per ticket for a 50,000-person festival.”

Mac Segal, who works for the protection company AS Solution as a security consultant, told Natour “there has to be a significant shift in the way hotels, businesses and concert venues think about security. That change “will save lives,” he said. But, as Natour reports, “it hasn’t happened yet.” 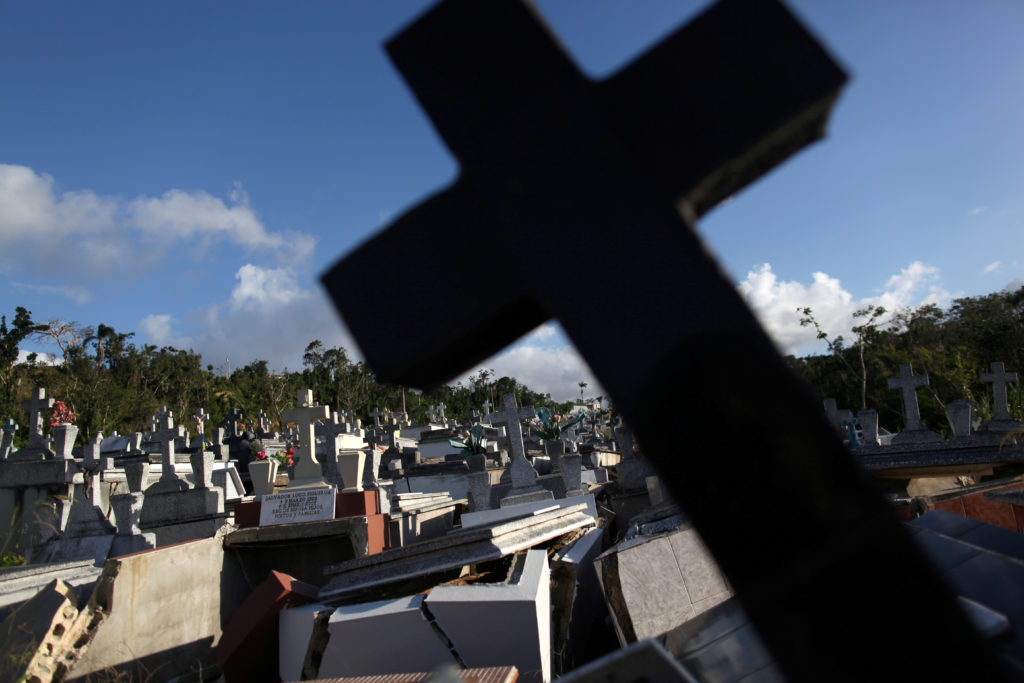 Puerto Rico’s suicide rate increased 29 percent in 2017 from the year before, and Hurricane Maria is the leading reason why. REUTERS/Alvin Baez.

Older residents in Puerto Rico have faced bouts of severe depression since Hurricane Maria thrashed the island in September.

Puerto Rico’s suicide rate increased 29 percent in 2017 from the year before, and Hurricane Maria is the leading reason why, according to NPR. Calls to the island’s suicide prevention hotline more than doubled after Maria hit.

An NPR dispatch from the island interviewed residents who are devastated that their community meeting places have either been destroyed or slow to open and their routines have been irreparably disrupted. So, though infrastructure is slowly being rebuilt, life is drastically different for many on the island — which makes mental and emotional recovery much harder.

Another factor: Nearly 400,000 Puerto Ricans left the island between October and February according to a new study from tech company Teralytics, which leaves neighbors without the support system on which they once relied.

All of these uncertainties remain as the next hurricane season starts in June. [NPR]

Why it matters: Portions of Puerto Rico are still in recovery mode after Hurricane Maria hit the island in September. Power has returned more slowly to the rural areas in the southeastern part of the island where Hurricane Maria first made landfall than the rest of Puerto Rico. Those municipalities are still repairing power lines are removing debris seven months after Maria hit. The Army Corps of Engineers is scheduled to leave the island and hand over power restoration to the Puerto Rico Electrical Power Authority on Friday. Meanwhile, hurricane season starts again in June, raising questions about how much the island has — and has not –recovered, and whether or not it is prepared for another serious storm. 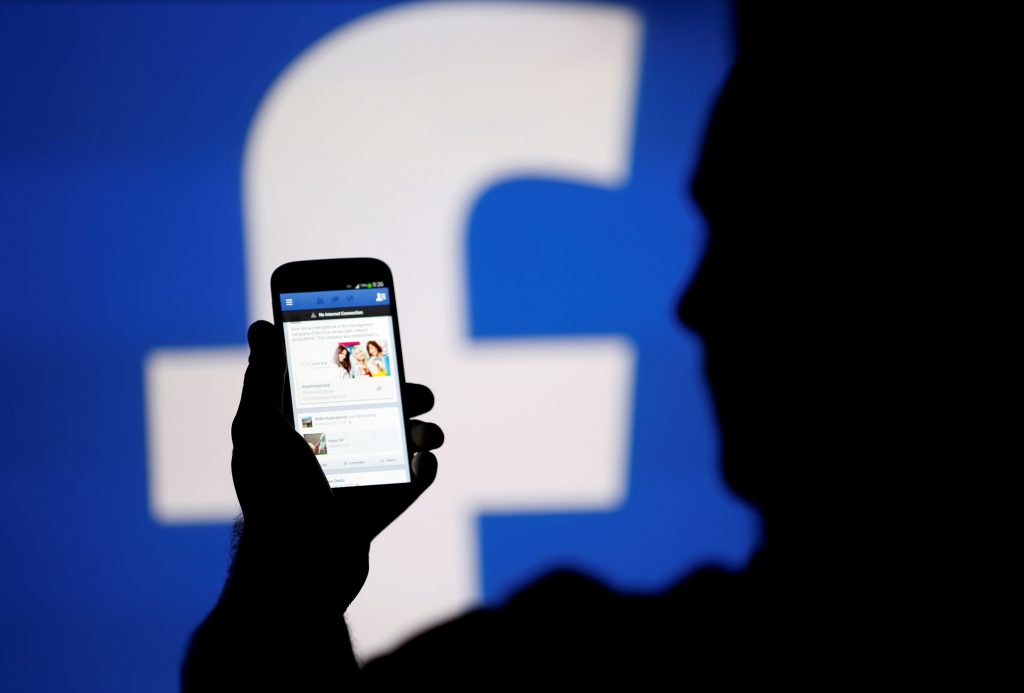 A review from Bloomberg Businessweek last week suggested that content from at least a dozen U.S.-designated terrorist organizations could readily be found on the social media platform. REUTERS/Dado Ruvic/File Photo

A review from Bloomberg Businessweek last week suggested that content from at least a dozen U.S.-designated terrorist organizations could readily be found on Facebook.

Hamas and Hezbollah in the Middle East and Boko Haram in West Africa are among the groups winning in a game of virtual whack-a-mole with the social media giant.

“The terror groups are rallying supporters with everything from gruesome photos of death caused by their enemies to quotidian news about social services they offer,” the report said. “Several can be found simply by typing their names into Facebook’s search bar in English or, in some cases, in Arabic or Spanish.”

Facebook already uses artificial intelligence to remove groups linked to ISIS or al-Qaida. CEO Mark Zuckerberg has said that strategy has been successful. But the company has long maintained that users reporting malicious content is the best way to eradicate it on its platform.

Yet the Bloomberg report found that even when groups reported for objectionable content are taken down, second and third iterations of the groups resurface and remain on Facebook. In some cases, extremist organizations link to those groups on their websites, and critics charge Facebook isn’t responding quickly enough. [Bloomberg Businessweek]

Why it matters: Monitoring and censoring extremism on its platform is just one of the areas for which Facebook has caught flak. The company faced criticism after U.S. intelligence agencies released information about the Russian campaign to interfere in the 2016 elections, including through spreading misinformation via bots and trolls on social media platforms. On Monday, Facebook announced that it is suspending about 200 apps for “suspicious activity” involving its users’ data.

This comes weeks after Mark Zuckerberg testified on Capitol Hill about the platform’s privacy issues, including with Cambridge Analytica, a third party firm that improperly accessed the data of 87 million Facebook users. The head of the United Kingdom’s counterintelligence agency said Monday that Russian propaganda efforts, “supercharged” by the internet, still pose a serious threat to Western democracy. In the most recent case cited by the Bloomberg report, the company says it has reviewed “thousands” of apps so far and an internal audit is ongoing. A statement from Facebook did not say what criteria it was using to evaluate apps other than whether the app “miuse[d] user data.”

5. Extremists in Indonesia used their own children in suicide bomb attacks over the weekend, authorities say 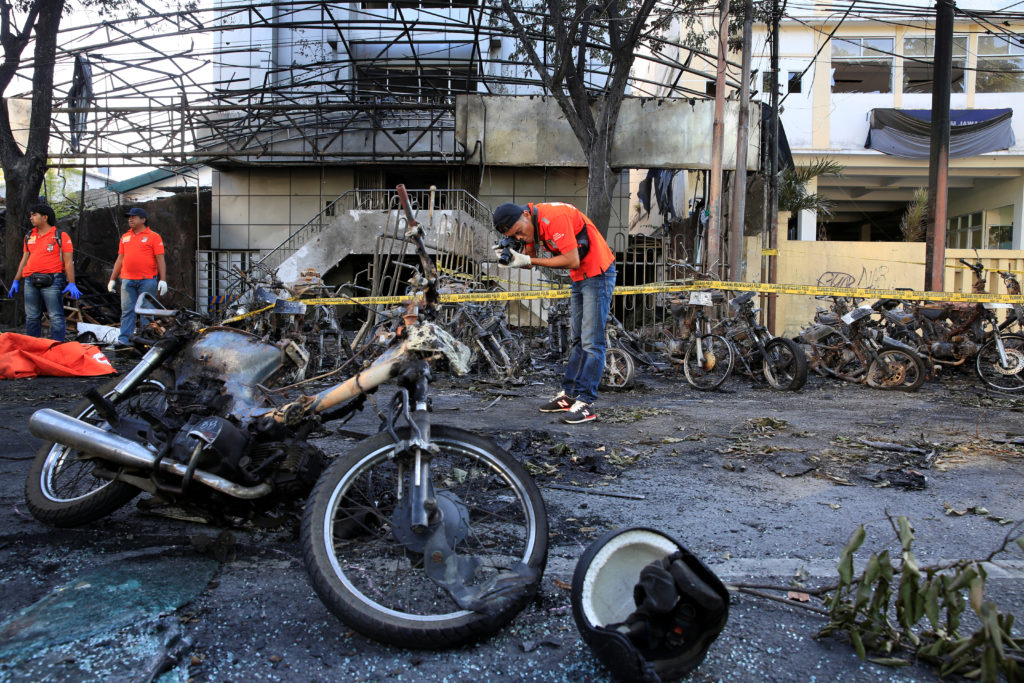 A forensic police officer takes pictures of debris near burned motorcycles following a blast at the Pentecost Church Central Surabaya (GPPS), in Surabaya, Indonesia May 13, 2018. REUTERS/Beawiharta.

A string of suicide bomb attacks on Sunday and Monday in Indonesia left at least 25 dead and at least 46 injured.

All of the attacks took place in Surabaya, Indonesia’s second largest city, and all were ISIS-inspired, according to authorities. The adult perpetrators in all of the bombings also apparently used their children to carry out the suicide attacks.

The first attack came Sunday. A family of six detonated three bombs at three churches. The mother and two daughters, ages 9 and 12, blew themselves up in a church entryway up while the two teenage sons, ages 16 and 18, rode motorcycles by a church before their own bomb went off.

The father drove a vehicle into a church and set off a third set of explosives, believed to be in the car.

Authorities said the family had returned to Indonesia after being deported from Syria.

On Monday, a family of five, riding motorcycles, detonated a suicide bomb in front of the Surabaya police station. Four of the members were killed. Their 8-year-old daughter was thrown clear of the blast and taken to the hospital for treatment.

Police say they found explosives and plans for other attacks in apartment searches.[The New York Times]

Why it matters: In the last few months Indonesia has struggled with a rise in extremism. Indonesia is the world’s most populous Muslim country — with about 12 percent of the world’s Muslim population, it’s ahead of both Pakistan and India — and as ISIS’ territorial hold in Iraq and Syria dissipates, security experts are worried about fighters trained by the extremist group returning to the island nation. ISIS claimed its first attack in Indonesia in 2016 when armed militants attacked a shopping center in Jakarta. The addition of children in attacks brings a gruesome new element to extremism there, experts say.

This story has been updated to reflect the correct location of Yale, which is Connecticut.