1. One of the country’s biggest drugmakers will stop pushing OxyContin to doctors 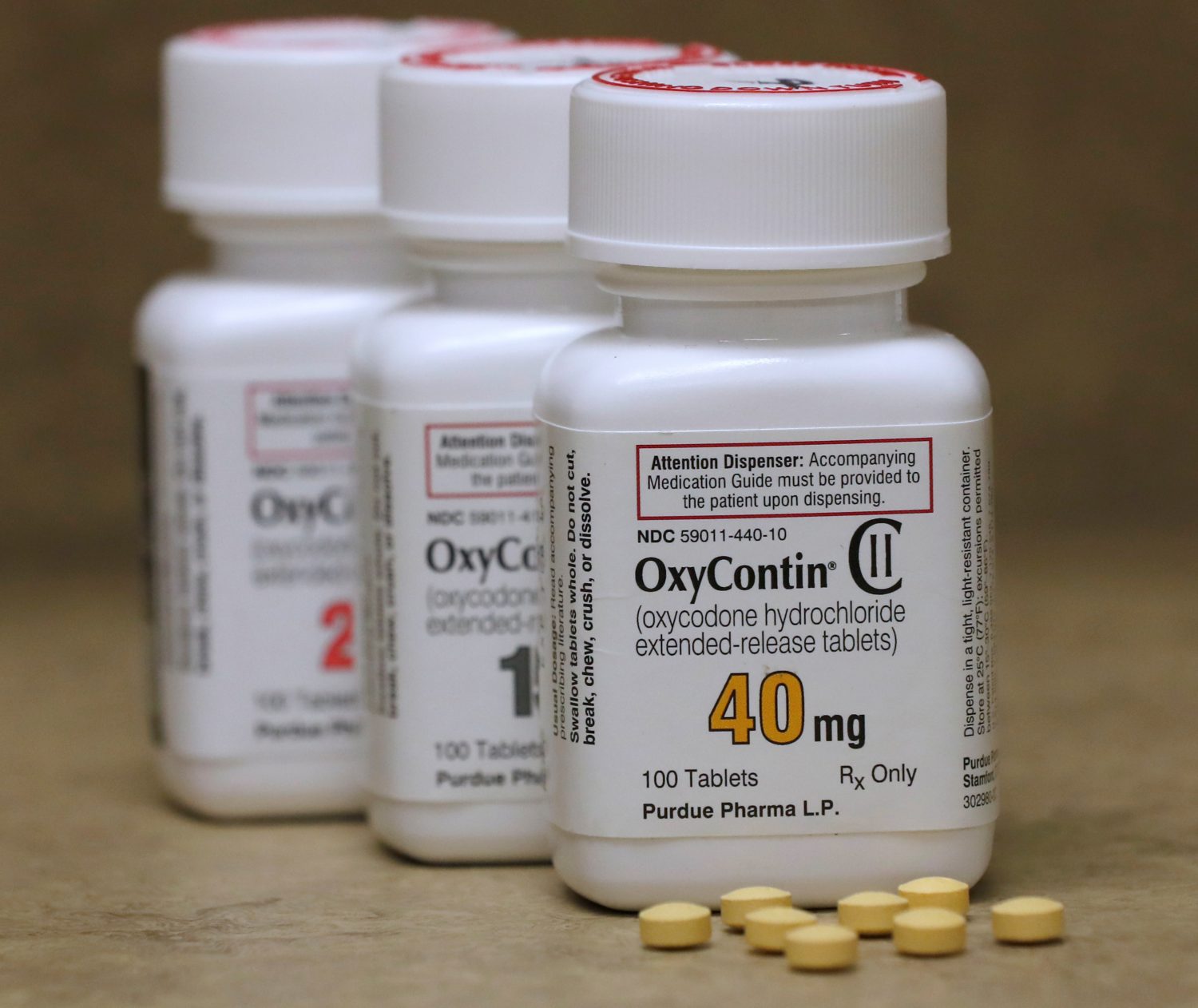 Bottles of prescription painkiller OxyContin, 40mg, 20mg and 15mg pills, made by Purdue Pharma L.D. sit on a counter at a local pharmacy, in Provo, Utah. Photo by George Frey/REUTERS

The company behind the popular, powerful painkiller OxyContin announced this weekend that it will no longer push the drugs to doctors. The decision comes amid heightened scrutiny over drugmakers’ role in the opioid crisis that killed 42,000 Americans last year.

Purdue Pharma, in a statement to several media outlets Saturday, said it had dissolved half of its sales force and would no longer send sales reps in person to doctor’s offices and hospitals across the country.

That practice is at the heart of a number of lawsuits that claim pharmaceutical companies, including Purdue, were deceptive when marketing their opioid medications by not disclosing or mischaracterizing the benefits and risks. [The Los Angeles Times]

Why it matters: Since OxyContin hit the market in 1996, more than 7 million Americans have abused it, the L.A. Times reported.

Some experts say Purdue’s decision is better late than never. Others see it as too little, too late.

Marketing is just one way doctors are pressured to prescribe opioids, one researcher told the L.A. Times: Pharmaceutical companies commission influential studies, and can also negotiate with insurance companies to get a leg up — through better reimbursement or prior authorization — over competitors’ products.

“Doctors are not robots — they are part of a system that influences their behavior,” he added.

Dozens of lawsuits have been filed against drugmakers in the last year, the most recent from the state of Alabama, which claims that Purdue — the No. 1 opioid marketer in Alabama — has “deceptively and illegally” pushed opioids on doctors “in order to generate billions of dollars in sales.”

“Our average lifespan has reduced in the last two years, and this being the principal reason why,” the state’s attorney general told NPR.

It’s not immediately clear what impact this announcement will have on those lawsuits. But Purdue’s decision will really only have impact on the epidemic as a whole if other drug manufacturers follow suit, Andrew Kolodny, the co-director of opioid policy research at Brandeis University, told The Boston Globe. 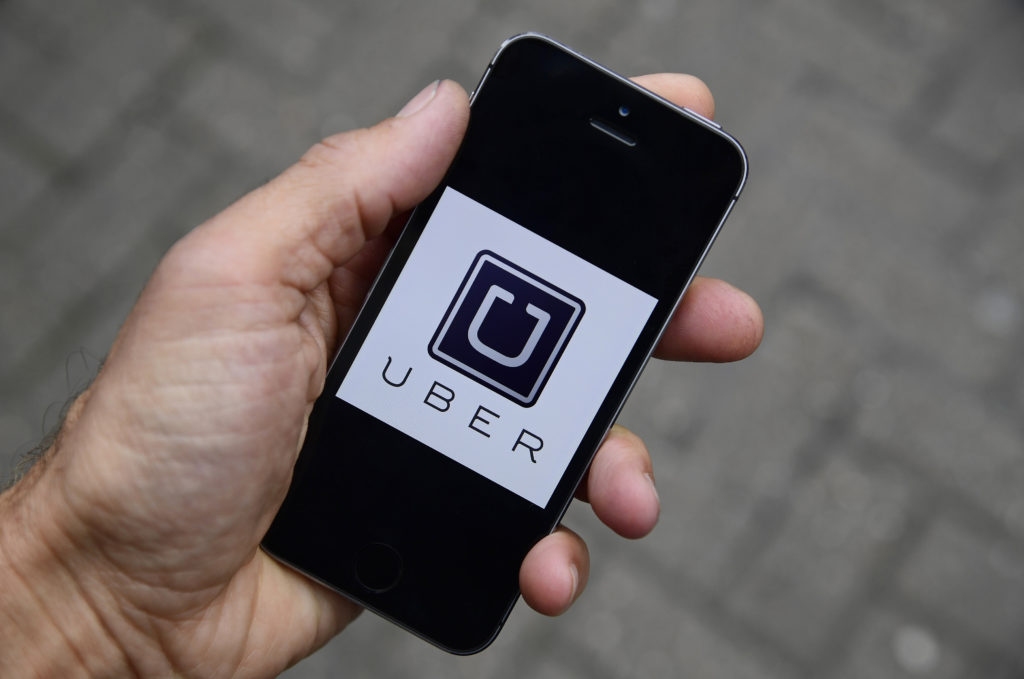 A photo illustration shows the Uber app logo displayed on a mobile telephone, as it is held up for a posed photograph in central London, Britain October 28, 2016. This logo has been updated and is no longer in use. Photo by REUTERS/Toby Melville/Illustration

Why it matters: The lawsuit is the latest in a series of headline-grabbing problems Uber has faced in the last year, including former CEO Travis Kalanick’s ouster following allegations of sexual harassment and mismanagement. Under new leadership, the company is attempting to make a turnaround. But problems remain.

Cities still haven’t figured out how to deal with Uber and other ride-hailing apps like Lyft and Via, who critics say put longtime livery drivers in cities like London and New York out of business or in substantial debt, as would-be riders opt to take what they see as a cheaper and more convenient option than traditional taxis. According to the New York Times, there were 47,000 for-hire cars in the city in 2013. Now there are more than 100,000, and the majority are Uber contractors.

Last week, a longtime New York City cab driver committed suicide. He had previously outlined how his profession, and his life, had been impacted by the rise of ride-sharing companies. He wrote it could take working 100-hour weeks to make the same amount of money he once made in 40-hour weeks, blaming New York politicians for helping the rich over the poor. For their part, local politicians do have power in how traditional taxi companies can compete with the newer companies — in October, London declined to renew Uber’s 5-year license to operate in the city.

3. Poland threatens jail time for those suggesting the country had a role in the Holocaust 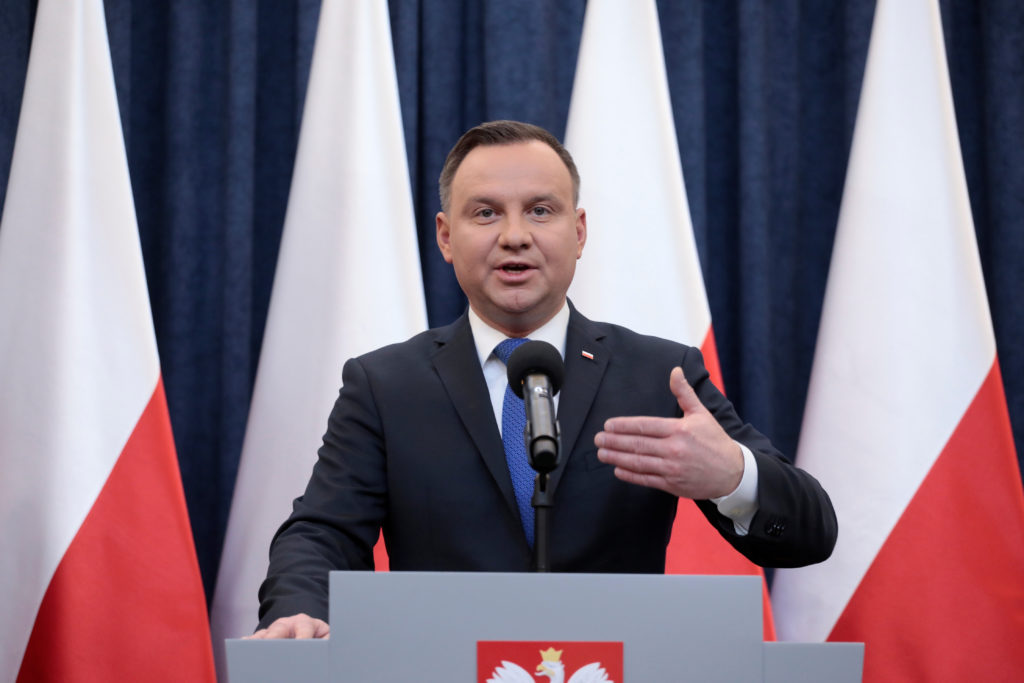 Poland’s President Andrzej Duda speaks during his media announcement about his decision on the Holocaust bill Feb. 6 at Presidential Palace in Warsaw, Poland. Agencja Gazeta/Dawid Zuchowicz via REUTERS.

A new law in Poland will criminalize the use of phrases that suggest the country was complicit in the Holocaust. The measure, passed last week, must be reviewed by the constitutional court before it can be fully enacted. But as it currently reads, those who “defame” Poland by associating it with the Holocaust can be forced to pay a fine, or face up to three years of imprisonment.

Polish President Andrzej Duda, in supporting the legislation, said in a televised address it will protect Poland’s international reputation. “There was no systemic way in which Poles took part in” the Holocaust, he said during that address. But critics like Secretary of State Rex Tillerson said, while phrases like Polish death camps are “painful and misleading,” “enactment of this law adversely affects freedom of speech and academic inquiry. … We believe that open debate, scholarship, and education are the best means of countering misleading speech.” In a stronger rebuttal, Israeli Prime Minister Benjamin Netanyahu said “we will under no circumstances accept any attempt to rewrite history.” [NPR]

Why it matters: Some of the most notorious Nazi concentration camps were in Poland, including Auschwitz, and at least 3 million Jews died in the country. Critics say making it illegal to point out Poland’s role in the Holocaust makes it easier for people to deny the existence and extent of the atrocities. It’s for this reason that in neighboring Germany, Holocaust denial is illegal, and is punishable by up to five years of jail.

Poland’s move in the opposite direction is another sign that Poland is continuing to move even more right. Historians have chronicled the rise of the extreme right in Poland for several years, part of trend they’ve also seen in other parts of Europe and in the U.S.

“Their polished images and relatively temperate language have enabled them to post record numbers at the ballot box of late — and, indeed, to jar Europe’s liberal order by pushing their policies on three areas in which their interests overlap with neo-Nazi extremists: immigration, Islam, and the EU,” the Atlantic said in November. 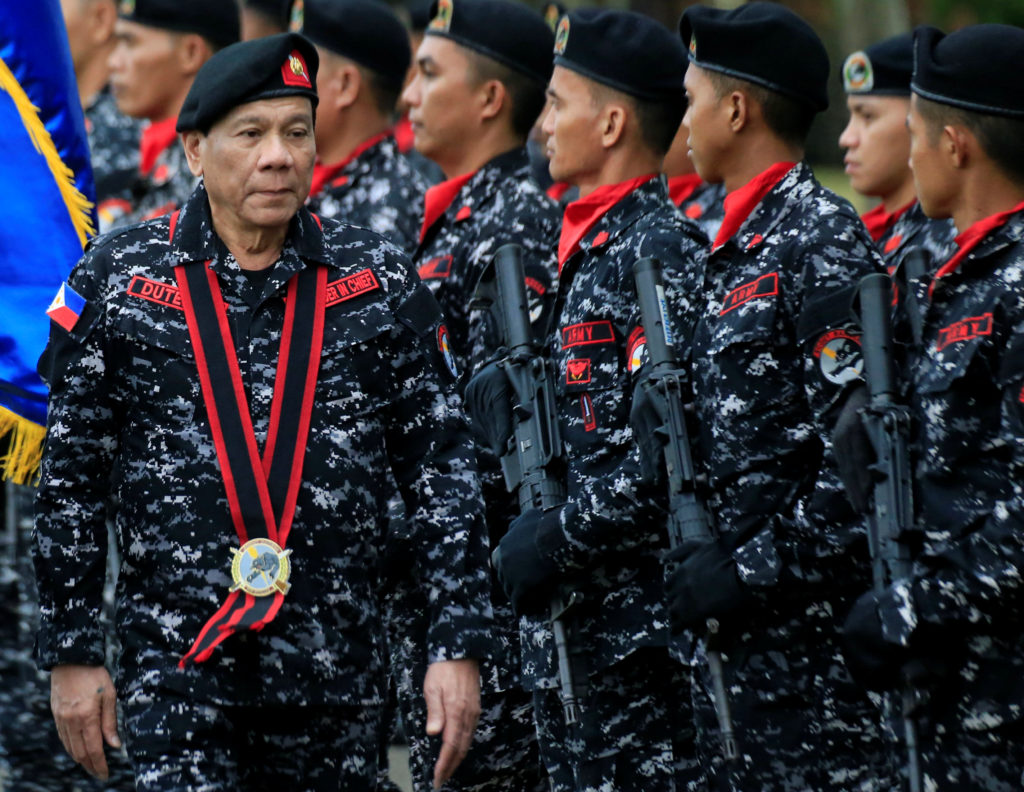 Philippines President Rodrigo Duterte has drawn sharp criticism for his bloody war on drug dealers. This week, he’s also under fire for suggesting soldiers “shoot female rebels in their genitals,” the Washington Post reported.
It’s “the latest in a series of misogynist, derogatory and demeaning statements he has made about women,” Human Rights Watch said in a statement. [The Washington Post]

Why it matters: With all of the focus on North Korea and its growing nuclear program, some of the international attention to Duterte, and what many describe as a long history of human rights abuses, has waned.

Since taking office in the summer of 2016, Duterte has threatened to leave the UN, traded several barbs with former President Barack Obama — including calling Obama a “son of a whore” — and lobbed obscenities at the pope, a surprise in a country that identifies as 80 percent Catholic.

He’s also relentlessly pursued his inaugural pledge to “kill all the drug lords.” While Duterte has said the campaign targets street-level dealers, and police kill only in self-defense, groups like Human Rights Watch claim officers are essentially carrying out extrajudicial executions of drug lords, as well as journalists and human rights activists.

More than 12,000 people have died since Duterte’s “war on drugs” began, the advocacy group said, though the government says that number is much lower.

So far, “Duterte’s strong political support, combined with his reputation for silencing critics, has kept Philippine institutions from conducting independent investigations or pursuing criminal charges,” the Post reported. But last week, the International Criminal Court announced its own investigation.

Duterte, who has mocked and criticized the ICC, said through a spokesperson he welcomes the chance to defend himself on the stand. If the investigation moves forward, it may be the strongest call to accountability Duterte has faced yet. 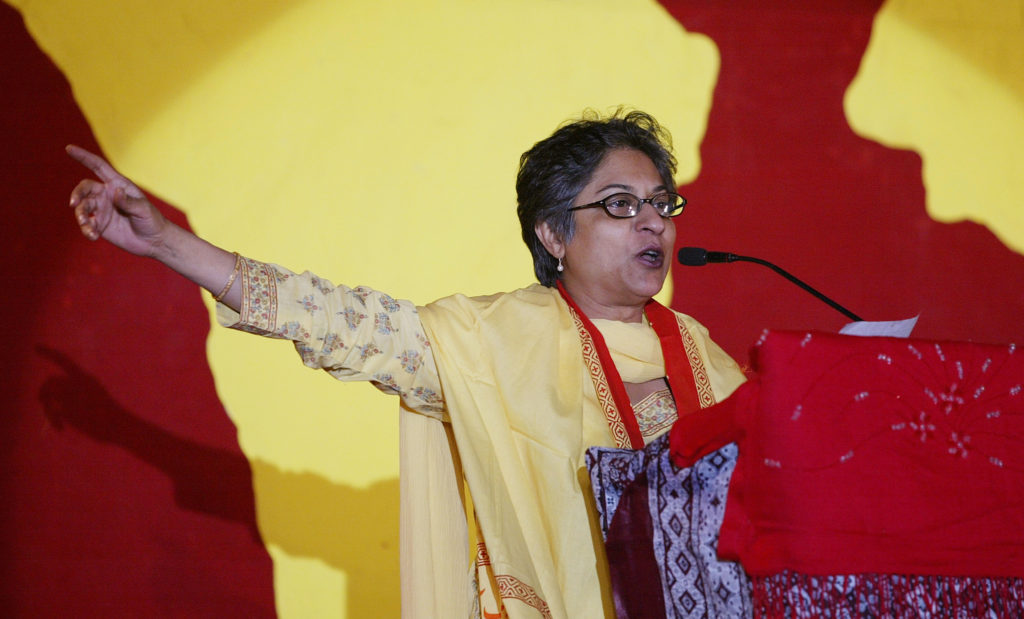 Asma Jahangir, a Pakistani lawyer and renowned human rights activists, died Sunday night at age 66 from cardiac arrest. She was considered a feminist hero for helping to lead a long fight to change deeply-rooted laws that were discriminatory towards women. In 1987, she founded the Human Rights Commission of Pakistan, and was the first woman president of the Supreme Court Bar Association of Pakistan from 2010 to 2012.

“Asma Jahangir was a voice of the oppressed and an icon of courage and valor,” Maryam Nawaz Sharif, daughter of former Pakistani Prime Minister Nawaz Sharif, told the New York Times. [BuzzFeed]

Why it matters: Jahangir was a fierce voice for anti-corruption, anti-dictator and anti-war causes in a society where holding such views could be dangerous, supporters say. Jahangir said that she faced serious death threats, and she was forced into house arrest more than once. As a lawyer, she frequently fought corruption in the legal community and made an effort to represent impoverished workers fighting for their basic rights. Further, she is cited as an inspiration for Southeast Asian women and those fighting for equality and women’s and minority rights.

“We have lost a human rights giant. She was a tireless advocate for inalienable rights of all people and for equality — whether in her capacity as a Pakistani lawyer in the domestic justice system, as a global civil society activist, or as a Special Rapporteur,” the U.N. Secretary-General Antonio Guterres said in a statement.

Left: Protesters and residents hold lighted candles and placards Aug. 25 at the wake of Kian Loyd delos Santos, a 17-year-old high school student, who was among the victims of President Rodrigo Duterte's war on drugs in Caloocan city, Metro Manila, Philippines. File photo by REUTERS/Dondi Tawatao -