1. A police brutality case in North Carolina points to the pitfalls of relying on body cameras

Video by The Citizen Times. WARNING: This video is graphic.

The body cam footage was released in February, months after the Aug. 25 encounter between an officer in training and pedestrian Johnnie Jermaine Rush, who is black. The officer in training told Rush that he was spotted not using a crosswalk four times, and said he could either arrest Rush or write him a ticket, The Citizen Times reported.

As Hickman moved in to arrest Rush, the man attempted to flee.

Rush is then subdued to the ground. The body cam footage showed Hickman punching and Tasering Rush, who screams in pain.

Hickman is no longer with the department, the Citizen Times reported.

Why it’s important: Leaders in the Asheville community have questioned why it took so long for the public to learn about this incident, especially since the city had recently implemented new measures to de-escalate violent encounters with police.

Susanna Birdsong, an ACLU lawyer, told the Associated Press that a city’s body cam policy doesn’t guarantee that officers will always follow the rules. In Asheville, the police department is required to review a portion of the footage each month. Releasing that footage to the public also requires a judge’s signature, per North Carolina state law.

Asheville’s City Council has also called for a third-party audit for racial bias of the police department.

That was the subject of a joint investigation of the Jacksonville, Florida, police department by the Florida Times-Union and ProPublica, which ultimately found that officers disproportionately enforced its pedestrian statutes: Black people in the city were three times more likely than white people to be issued a pedestrian violation.

2. Sri Lanka has ordered a state of emergency and ban on social media after a spike in violence against minorities 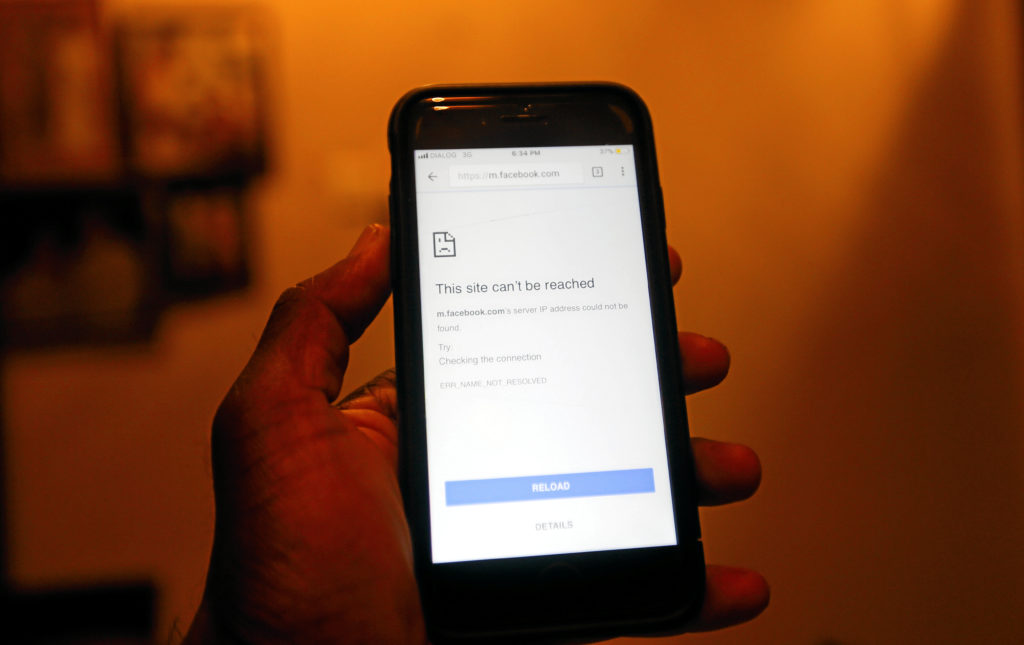 A mobile phone screen shows that the Facebook page won’t open after the government of Sri Lanka shut down social messaging networks. Photo by REUTERS/Dinuka Liyanawatte.

On Tuesday, the Sri Lankan government declared a state of emergency after violence erupted between the country’s majority Sinhalese Buddhists and the Muslim minority. That included ordering internet providers and mobile phone carriers to temporarily block access to Facebook, WhatsApp and Viber, after a number of social media posts called for attacks on Muslims. Mobs have rioted in and around the city of Kandy, burning Muslim-owned businesses and mosques.

A spokesperson for Facebook said told Buzzfeed last week that the company was communicating with the Sri Lankan government as well as NGOs to “support efforts to identify and remove such content.” Other news outlets reported that Instagram has also been blocked. [BuzzFeed News]

Why it matters: Social media giants like Facebook and Twitter have been under intensifying scrutiny for the role content on their platforms play in stoking racial and political divisions. In 2017, nonprofit internet watchdog Freedom House released a report that said “hate speech against minorities continues to foment on various social media platforms, particularly Facebook” in Sri Lanka. In the U.S., lawmakers have blamed Facebook and Twitter for their role inRussian actors interference in the 2016 elections. The UN has

Recently, some countries in Europe have passed stricter laws around social media content. In Germany, for instance, a new law requires Facebook and Twitter to remove hate speech from their platforms or face fines up to $62 million.

The social media ban was originally set to last 72 hours, but now, it appears it will extend until the government lifts its state of emergency, the Sunday Times reported. The state of emergency is valid for 14 days, at which point it would have to be extended by Parliament, the Times said.

3. Mysterious letters are calling for an April 3 ‘Punish a Muslim Day’ in Britain

At least six communities across England received anonymous letters over the weekend threatening that April 3 would be “Punish a Muslim Day.” The letters included a point system for certain acts of harassment and violence, such as pulling off a woman’s head scarf or bombing a mosque. The notes also promoted acid attacks and torture.

“Punish A Muslim Day” letters are being sent to families in East London. The letter details a point system for each action & a reward. For example pulling a Muslim women’s hijab is 25 points, throwing acid is 50 points and burning or bombing a mosque is a whole 1,000 points. pic.twitter.com/6kmCrDrXt0

The U.K.’s North East Counter Terrorism Unit said that there is an investigation underway.

“We take religious hatred extremely seriously and my officers will be carrying out a full and thorough investigation in response to these reports,” Detective Chief Superintendent Martin Snowden, Head of Counter Terrorism Policing North East, said in a statement. “These letters seek to cause fear and offence among our Muslim communities. They also seek to divide us. Yet in spite of this, our communities have shown strength in their response to such hatred and in their support for each other.” [The New York Times]

Why it matters: In 2011, about 2.7 million Muslims — 4.8 percent of the population — lived in England and Wales, according the most recent census data available. Yet those in Britain think that the number of Muslims living there is much greater — about 15 percent, according to a 2016 survey by Ipsos Mori. A 2016 Pew survey indicated that 28 percent of those surveyed in the U.K. had negative feelings toward Muslims, the lowest percentage of the 10 countries surveyed. But 47 percent of U.K. residents believed that further migration from majority-Muslim countries should stop, according to a 2017 survey by Chatham House Royal Institute of International Affairs.

Anxiety over immigration was a large part of the successful campaign for Britain to leave the European Union. Anti-Muslim sentiment boiled over in June 2017, when Darren Osborne allegedly plowed a van into a crowd at Finsbury Park. An obscenity-laden anti-Muslim note that he left in the vehicle shows that he appeared to be targeting Muslims.

“Let me be clear, British Muslims should be able to live without fear of abuse and attack,” tweeted Sajid Javid, a member of Parliament. “And we will do everything in our power to tackle those who spread hate.” 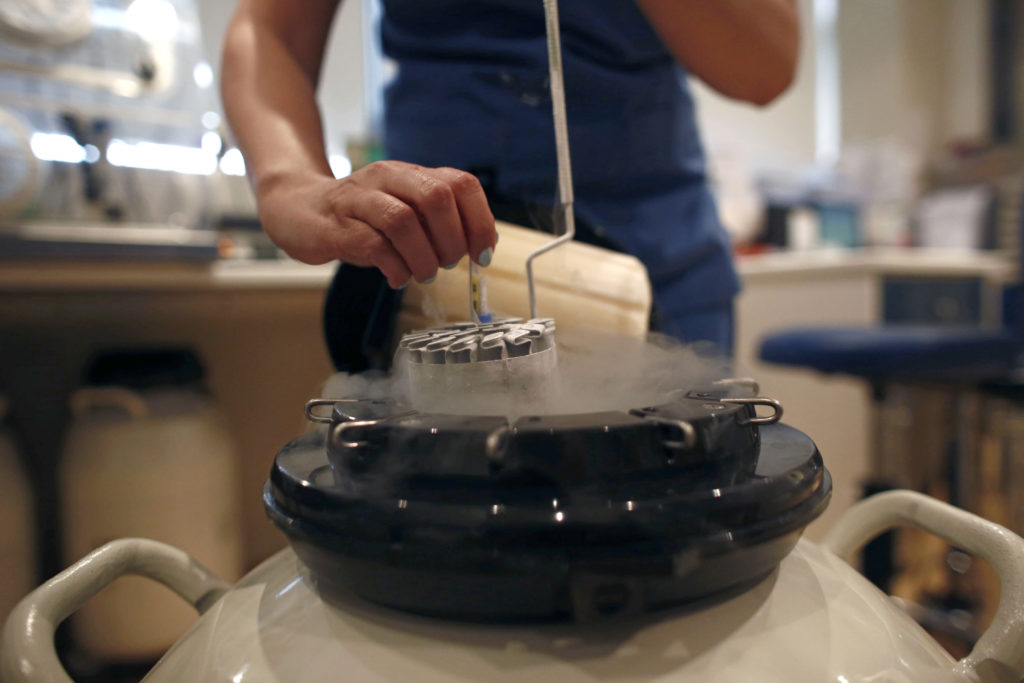 An employee arranges a test tube in a container used to freeze human eggs in a laboratory for In Vitro Fertilisation (IVF). Photographer: Kostas Tsironis/Bloomberg via Getty Images

In Cleveland, the University Hospitals Fertility Clinic said “an unexpected temperature fluctuation with the tissue storage bank” may have compromised more than 2,000 eggs and embryos stored in liquid nitrogen. And later in the week, in San Francisco, the Pacific Fertility Clinic said as many as 15 percent of the eggs and embryos stored there may have been damaged in a similar malfunction.

Both clinics said they were in touch with patients and investigating the incidents.

“As always, we are guided by the principle that we are going to do the right thing by our patients and their families,” University Hospital wrote in a statement. [The Washington Post]

Why it’s important: The Post said the number of women who freeze their eggs have “soared” in the last several years, as more put off childbirth for health reasons, such as a cancer diagnosis, to further pursue demanding careers, or as they search for a partner. More than 7,500 women froze eggs in 2015, according to the Post, citing data from the Society for Assisted Reproductive Technology; in all, about 20,000 women in the U.S. have preserved their eggs.

Freezing eggs and embryos can cost up to $15,000, and doctors recommend women store a few dozen eggs to increase their odds of a successful live birth. In the case of the Cleveland clinic, some patients had stored their eggs or embryos for 10 years.

It’s still unclear what caused the malfunctions. A group of adults conceived by donors asked the FDA earlier this year for better oversight of so-called crypto-banks, the Post reported, which are largely self-regulated.

Meanwhile, the Associated Press reported, one Ohio family who had stored two embryos in the Cleveland facility has already filed a class action lawsuit against University Hospitals Cleveland Medical Center. They hoped to provide their 2-year-old son a genetic sibling, and now, said they will no longer be able to do so because their embryos were damaged.

5. Doctors in Quebec are asking to give back their raises

Last week, West Virginia teachers — among the lowest-paid educators in the country — successfully negotiated a 5 percent pay hike after a historic strike that closed schools for nine days.

Since late February, more than 700 professionals have signed a petition to redistribute the raises, saying the money would be better used to improve hospital and clinic conditions.

In Canada, doctors are protesting because they feel they make too much money — and they want the hundreds of millions in raises approved by the government to go to lower-level workers like nurses instead.

Quebec health professionals have started to be more vocal about a nurse shortage, along with the high patient-to-nurse ratio. Some doctors say they feel ashamed taking a raise at a time when other parts of the health care system are in such bad condition.

Since late February, more than 700 professionals have signed a petition to redistribute the raises, saying the money would be better used to improve hospital and clinic conditions.

CNN reported that the raise couldn’t be rescinded “unless the majority of doctors vote for that to happen.”

Health minister Gaétan Barrette said: “If they feel they are overpaid, they can leave the money on the table. I guarantee you I can make good use of it.” [CNN]

Why it matters: There are 20,000 doctors in Quebec, where the petition is based, the BBC reports.

Like most education in the U.S., health care in Canada is run publicly, which means salaries can vary widely depending on where you live, the BBC notes. In neighboring Ontario, for instance, medical professionals have actually fought (unsuccessfully) for raises for a number of years, the BBC reported.

Those regional differences are also playing out in the U.S., where teachers in Oklahoma — three states away from West Virginia — are now threatening to strike over pay and working conditions.

Both cases point to a new wave of organized strikes among public workers. It’s too early to tell whether that kind of momentum will carry over to Canada, or, to Oklahoma.

“So what do the people do when the courts are reluctant to intervene and the other branches of government have failed them for so long?” Joshua Weishart, a law and policy professor at West Virginia University, asked in an Atlantic article about the teachers’ movement. “They either quietly accept their fate or they publicly resist and demand change.”