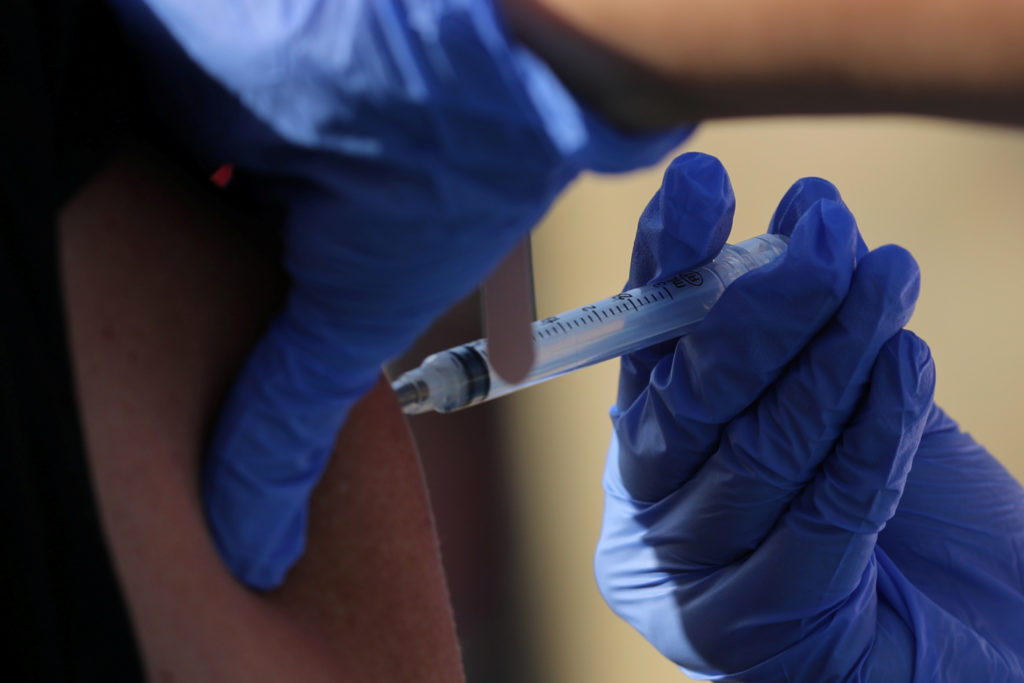 A homeless person is flu vaccinated Oct. 9 as she registered to enter as transitional camp area for homeless people at the city’s works yard in San Diego, California. Photo by Mike Blake/REUTERS

Health officials said Friday that the flu has claimed the lives of 27 people younger than 65 in California since October, a jump from the three flu-related deaths officials recorded in the same period last year, The Los Angeles Times reports. Most people in California and across the country are being infected by the H3N2 flu strain, known for its severity and resistance to flu vaccines. In California, Tamiflu, one of the go-to medications doctors prescribe to lessen the severity of flu symptoms, has been in short supply across the state. Ambulance services are strained and emergency rooms are filled because of the surge in flu cases, the Times reports. [The Los Angeles Times]

Why it matters: The Centers for Disease Control and Prevention says infections this year will peak anywhere from November to March, so California’s response to the H3N2 strain could help inform how other states act if an outbreak occurs. It’s hard to say how many people die each year from the flu, the CDC says, but in recent years, flu-associated deaths in the U.S. ranged from 12,000 to 56,000 per year. Health officials have counted 106 deaths so far this season. Among the most deadly cases are those in which patients seek medical attention too late. The lack of Tamiflu to treat flu symptoms has been a serious problem for California and could be a national concern if the strain continues to surge. The CDC still recommends getting a flu shot, even though it has a lower success rate against H3N2; even if the vaccine doesn’t prevent the disease, it can still mitigate the symptoms. The nasal spray, however, won’t do much to protect patients this year, doctors say.

2. As many as 64 migrants died after their boat sank off the coast of Libya 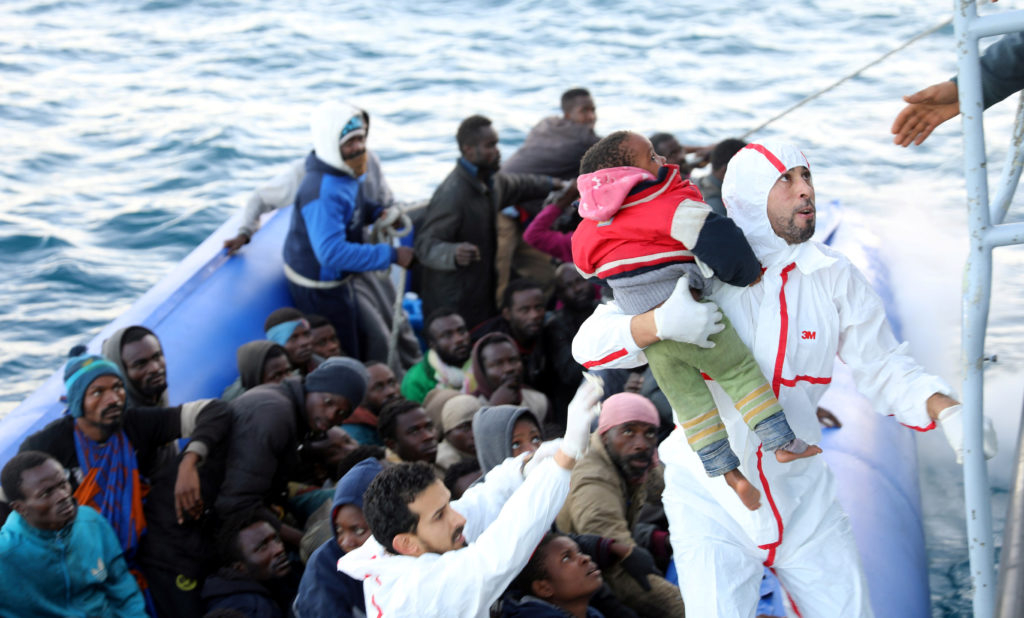 Migrants are rescued by Libyan coast guards off the coast of Garabulli, east of Tripoli, Libya on Jan. 8. Photo by Hani Amara/Reuters

As many as 64 migrants died over the weekend when their boat sank off the coast of Libya, humanitarian groups said Monday. Reuters reports that 86 people were rescued from the boat, which survivors said had been carrying about 150 migrants. “Among [the dead] there were many children who are believed to have drowned at sea,” Doctors Without Borders said in a statement. The survivors were found Saturday morning by a plane patrolling the waters, part of an European anti-smuggling operation, the Italian coast guard said. Rescuers believe the rubber vessel was punctured, causing it to sink. [Reuters]

Why it matters: The Mediterranean crossing from Africa to Europe was “by far the world’s deadliest border” last year, claiming 3,119 lives in 2017, according to the United Nation’s International Organization for Migration. But the IOM notes the true number of deaths is likely higher, considering the number of boats that sink under rescuers’ radar. In 2016, more than 5,000 migrants died crossing the Mediterranean. The massive influx of migrants into Europe from 2015 to 2016 caused policies toward migrants to harden in some European countries. Austria passed laws allowing the government to restrict who is granted asylum and to reject most migrants if a state of emergency is invoked. German Interior Minister Thomas de Maiziere said last year that if Europe cannot safeguard its external borders, then Germany will implement “appropriate national border controls against illegal immigration.” The issue is a large part of why German Chancellor Angela Merkel has yet to put together a government coalition, 100 days after the country’s elections. Failure to reach agreement on immigration and a host of other issues could trigger new elections there, NPR reports.

3. How cold is too cold for school? 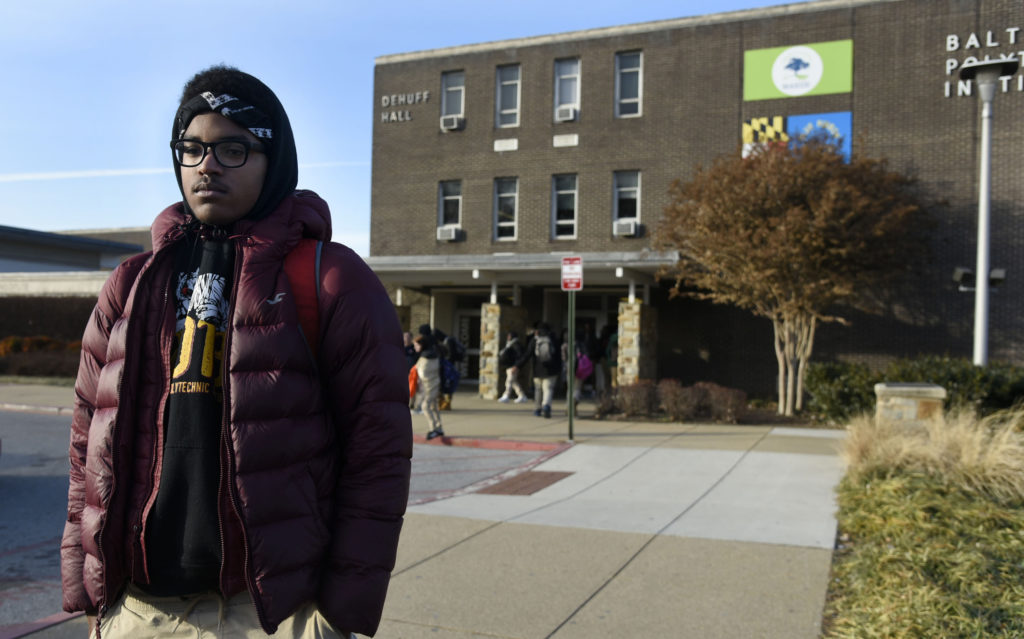 Matthew Cunningham, 18, a senior at Baltimore Polytechnic Institute, talks about the cold temperatures in the school as he leaves for the day on Jan. 3. Photo by Kim Hairston/Baltimore Sun/TNS via Getty Images

A cold spell known as the “bomb cyclone” swept the East Coast last week, prompting a series of school and government closures as temperatures plunged below 0 degrees. In Baltimore, some schools were shut down because of lack of heat and plumbing issues, but parents and teachers say the problem was far more widespread. Photos, interviews and social media posts suggested children were sitting in classrooms that were between 30 and 40 degrees. A school official told the Baltimore Sun that “too many of our buildings have outdated heating systems, poor insulation, and aging pipes as a result of years of inadequate funding for maintenance and facilities improvements.” Many of those issues persisted even after weekend repairs, the Sun reports. [The Baltimore Sun]

Why it matters: The issue in Baltimore illustrated one of the largest challenges cities and communities face when it gets cold. In Baltimore, Mayor Catherine Pugh told NPR “she has no say in whether schools are closed,” since the state has had oversight of Baltimore’s public schools for the past 20 years. How to keep buildings open and who is responsible when infrastructure fails is one debate. What to do about students who receive crucial meals and care in school is another. CityLab takes a deep dive on facilities management and how even the most robust school systems face problems when they don’t employ experienced building experts. As to the question of how cold is too cold, The Washington Post’s Valerie Strauss writes that there isn’t really an answer, nor any “national or professional standards for temperatures that adults can consult when considering whether to keep students indoors.” 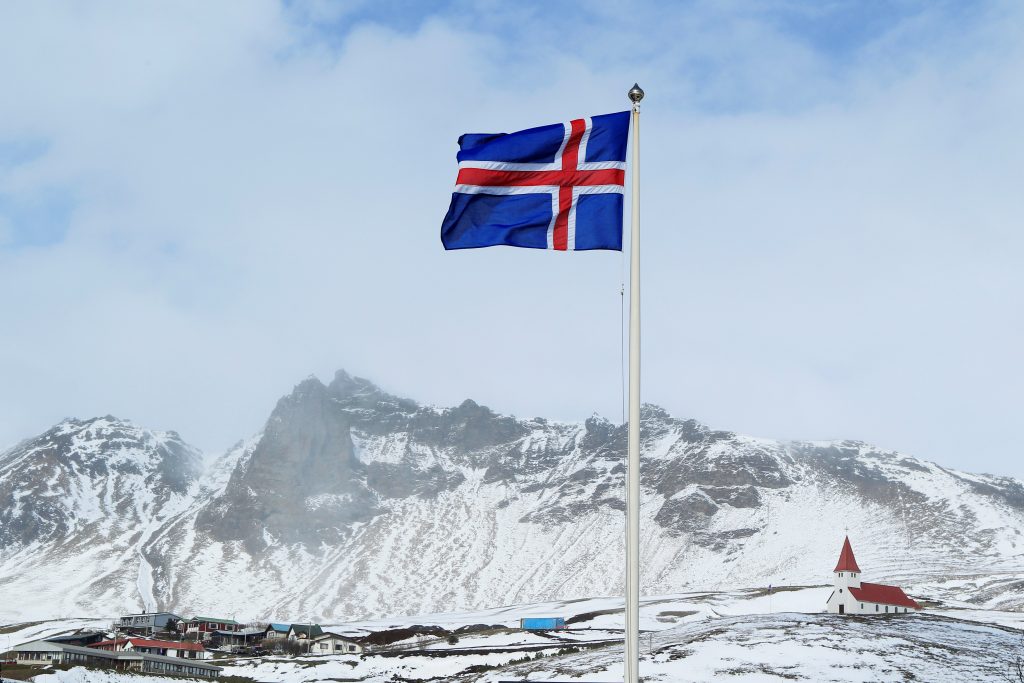 The first day of 2018 marked the start of a new law in Iceland requiring equal pay for men and women. REUTERS/Lucas Jackson/File Photo.

The first day of 2018 marked the start of a new law in Iceland requiring equal pay for men and women – said to be the first of its kind. Under the new law, companies and government agencies that employ at least 25 people must obtain certification of their policies enforcing equal pay for equal work. The new Equal Pay Standard assesses “a company’s pay policies, classification of jobs according to equal value and wage analysis on the basis of the classification, as well as formalizing policies and processes related to pay decisions,” according to Iceland’s Ministry of Welfare. Companies that fail to do so will face fines, though smaller companies will have until 2021 to comply. The new legislation, which still allows for differences in pay due to individual factors, such as experience or job performance, was supported by Iceland’s center-right government as well as the opposition in a parliament with a nearly 50-50 split between men and women. Iceland has been ranked as the world’s most gender-equal country by the World Economic Forum for the past nine years, and lawmakers say they plan to completely eliminate the pay gap by 2020. [Al Jazeera]

Why it matters: The pay gap has for years been a prominent and persistent political issue around the world. American politicians such as Vermont Sen. Bernie Sanders seized on Iceland’s new policy and called for the United States to follow suit, posting on Facebook: “We must follow the example of our brothers and sisters in Iceland and demand equal pay for equal work now, regardless of gender, ethnicity, sexuality or nationality.” Women in the U.S. earned about 82 cents for every dollar a man made in 2016, according to Labor Department data. The figure has been a rallying cry for athletes, celebrities, politicians, including former President Barack Obama, and many others. Critics, however, still claim the pay gap statistic is oversimplified and doesn’t consider factors such as career choice or additional hours worked.

5. A wave of startups launched in the wake of the #MeToo movement. Can they survive? 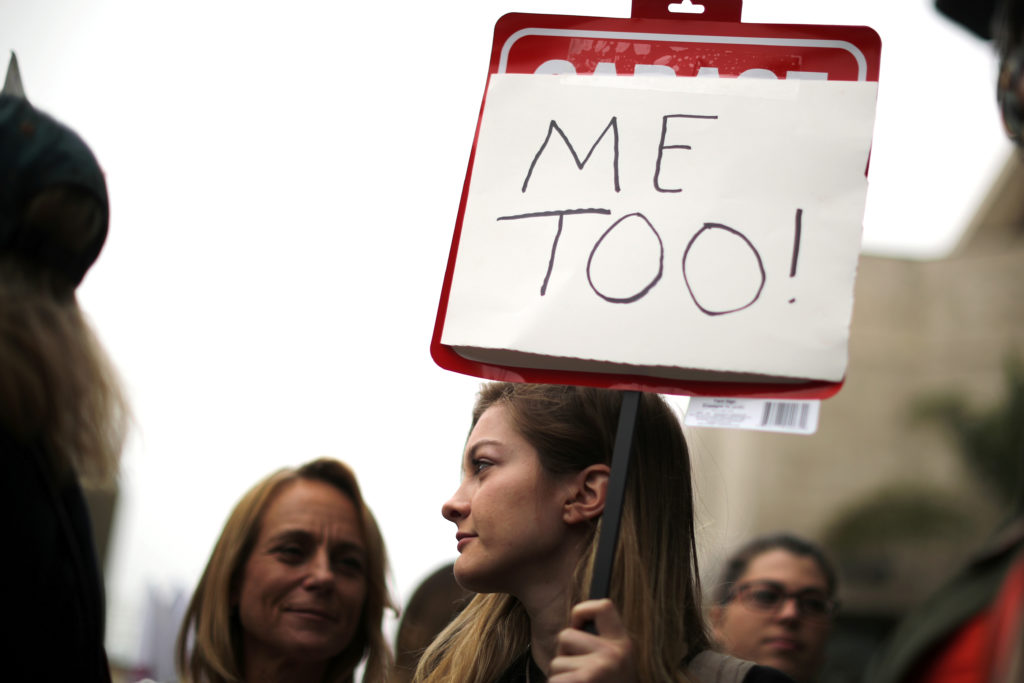 People participate in a “MeToo” protest march for survivors of sexual assault and their supporters in Hollywood. Photo by Lucy Nicholson/Reuters

The #MeToo movement that began in the wake of widespread sexual misconduct allegations against Hollywood producer Harvey Weinstein has sparked a wave of allegations against other powerful men across industries – and, for many companies, a closer look at Human Resources policies and training on sexual harassment. But the movement also has launched a wave of startups focused on the issue of sexual harassment in the workplace, the Washington Post reports. Some are platforms for anonymous reporting hotlines. Others offer third-party human resource coaches. All “want to disrupt a costly and persistent problem,” the Post says. [The Washington Post]

Why it matters: Companies spend millions of dollars dealing with sexual harassment cases each year, the Equal Employment Opportunity Commission says. There are huge costs involved, not only in dealing with the misconduct allegations themselves but in secondary costs, “such as lower productivity and higher turnover, which could be staggering over time,” the Post reports. But how exactly to prevent the behavior is an issue that has mystified workplace psychologists for decades, PBS NewsHour’s Rhana Natour reports. Studies have shown most sexual harassment training isn’t effective — if its success is measured at all. Businesses have not historically wanted to spend a lot of money on prevention, the Post says, so the challenges for startups are not only convincing companies to buy in, but also delivering a product that actually works.

Left: Migrants are rescued by Libyan coast guards off the coast of Garabulli, east of Tripoli, Libya. Photo by REUTERS/Hani Amara