5 Stories: Why wildfires are raging in one of the coldest places on Earth, NASA’s pretend mission to Mars and other stories you missed

NASA launches mission to live on a fake Mars

Pining for a chance to live on Mars? A NASA program is creating the next best thing.

NASA is seeking applicants for three separate yearlong missions that simulate life on Mars. The first mission starts in the fall of 2022.

The goal is to discover and troubleshoot problems that could occur during future human space travel missions. In each simulation, four crew members will live in a 1,700-square-foot 3D-printed module called Mars Dune Alpha that will actually be housed at Johnson Space Center in Houston. Crew members will execute fake spacewalks, perform scientific research, and more, all while addressing any equipment failures, communication delays and other issues that might arise.

To sign up, applicants must — among other things — be between 30 and 55 years old, pass a NASA physical, have a master’s degree in a STEM field or be an experienced jet-pilot.

The pandemic forced kids to trade school, sports and playdates for laptops, cell phones and Zoom birthday parties. The effects of screen time on mental health and learning have been well-documented, but new research reveals yet another side effect of the pandemic’s screen time boost: increased instances of nearsightedness in children.

A study published in the British Journal of Ophthalmology compared hundreds of 6 to 8-year-olds living in Hong Kong during the pandemic to a group assessed before COVID hit.

During the pandemic, the time kids spent outside dropped by more than two thirds, screen time more than doubled and incidents of myopia — or nearsightedness — jumped from 12 to 27 percent. Nearsightedness can be caused by viewing close-up objects for long periods of time, stressing out the muscles that control the eye’s focus.

While this is a single study, the new data falls in line with past research showing decreased outdoor time and increased near work negatively impact visual development.

“Little Amal” — a nearly 12-foot tall puppet — is on a 5,000-mile trek from Turkey to the United Kingdom. Video courtesy: LOFT Films/The Walk

A puppet standing nearly 12 feet tall depicting a Syrian refugee named Little Amal is on a 5,000-mile trek from Turkey to the United Kingdom.

It is controlled by four puppeteers: one for each arm, one for her back and one inside who walks on stilts while pulling strings to animate her face.

“The Walk” — as the project is called — is the creation of London’s Good Chance theater company. It is meant to bring attention to the plight of refugee children, especially those separated from their families. According to UNICEF, there are nearly 33 million forcibly displaced children around the world.

Little Amal, who was crafted by the same puppet company behind the hit play “War Horse,” will make her way through Italy, France, Switzerland, Germany and Belgium before reaching Manchester in November.

Wildfires rage in one of the coldest places on Earth

The Yakutia region of Russia has endured more than 300 wildfires this summer, burning more than 10 million acres of land so far. As of Monday, 163 fires are still raging and for the first time ever, smoke from those blazes has reached the north pole. 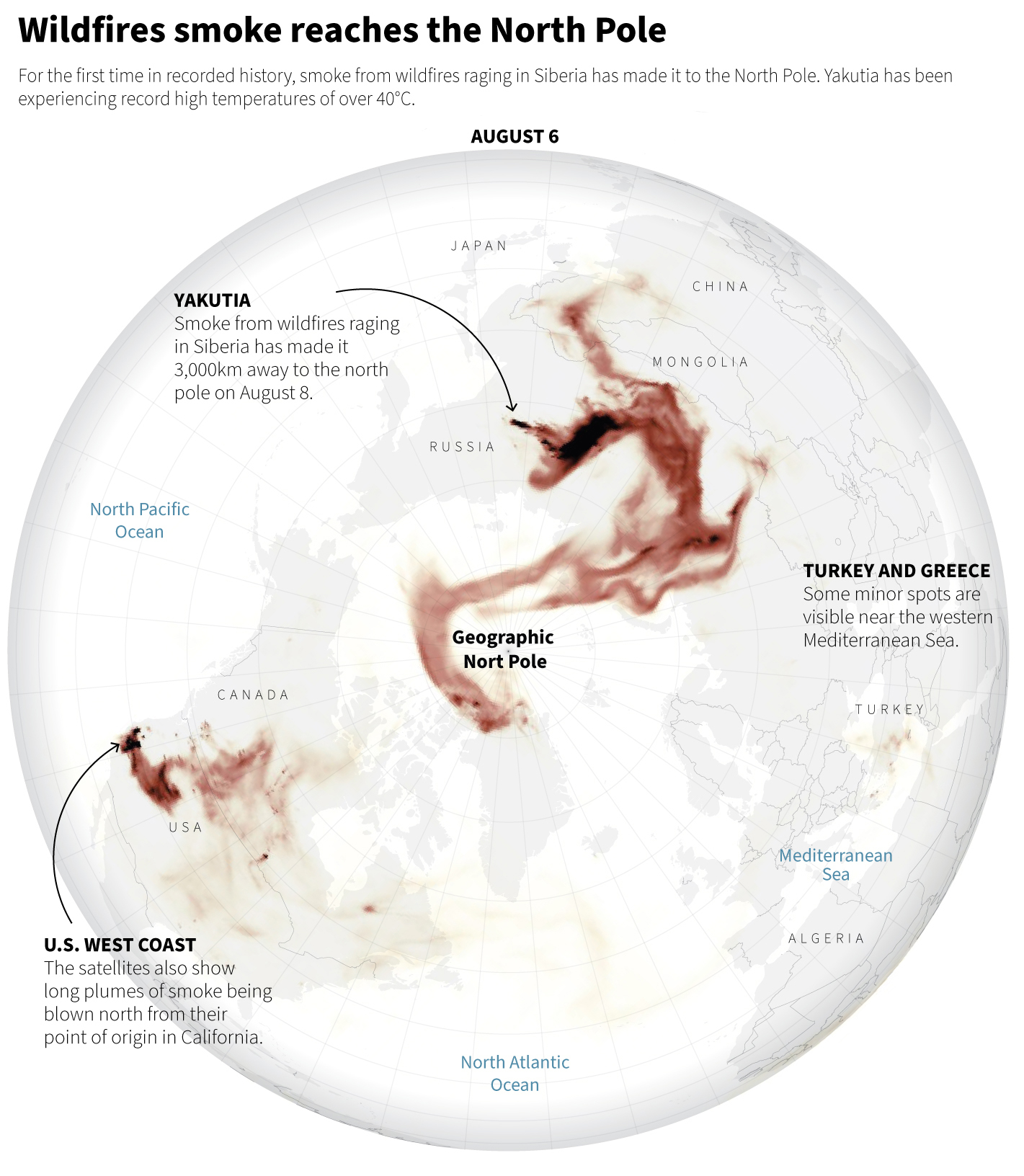 For the first time in recorded history, smoke from wildfires raging in Siberia has made it to the North Pole. Illustration courtesy: NASA, GEOS-5 GMAO; Terra/MODIS, Earth Observation/M. Hernandez/Reuters

Last year, Siberian wildfires released a record 540 megatons of carbon dioxide, and scientists expect even more this summer. That’s on top of thawing permafrost and peatlands in the region that are releasing climate-warming methane into the atmosphere as temperatures rise globally.

All this as a new Intergovernmental Panel on Climate Change report warned the world will likely see average temperatures 1.5 degrees celsius higher than pre industrial levels in the next decade if global emissions aren’t reigned in. Scientists consider 1.5 degrees the maximum “safe” level of change.

What we think we know about metabolism might be wrong

Middle age is not to blame for bulging waistlines.

New research published in the journal Science last week challenges the idea that our metabolism slows down after 40. Instead, the study of nearly 6,500 people — from newborns to those 95 years old — found humans have four distinct stages of metabolism during their lives.

Children under the age of 1 have metabolisms that peak 50 percent above adult metabolic rates. From 1 to 20 years old, our metabolisms gradually slow down by 3 percent a year.

Surprisingly, the metabolisms of adults aged 20 and 60 actually hold steady before slowing down again. After six decades, metabolism drops by about 0.7 percent a year.

Researchers also reported that there were no major differences between men and women after controlling for weight and muscle mass.