The clock on the iconic tower at the University of Texas stopped at 11:48 a.m. Monday, marking the exact time 50 years ago when a man began firing from atop the Austin landmark, killing 14 on campus. One of the victims was the unborn child of a woman who was shot. Another victim was injured at the time but died decades later from the wounds.

“Before we can see properly, we must first shed our tears to clear the way,” UT Austin President Greg Fenves said during a memorial service honoring the more than 45 people shot on the morning of Aug. 1, 1966.

The service included a dedication of a memorial stone for the 16 people and an 8-month-old fetus killed by Charles Whitman, a 25-year-old Marine-trained sniper, who was gunned by police about an hour and a half after the carnage began. Prior to ascending the tower, Whitman had killed his wife and mother.

“It’s not the stone we dedicate, but ourselves,” shooting survivor Claire James said, adding that the stone will be “reassuring and comforting” to those who visit. 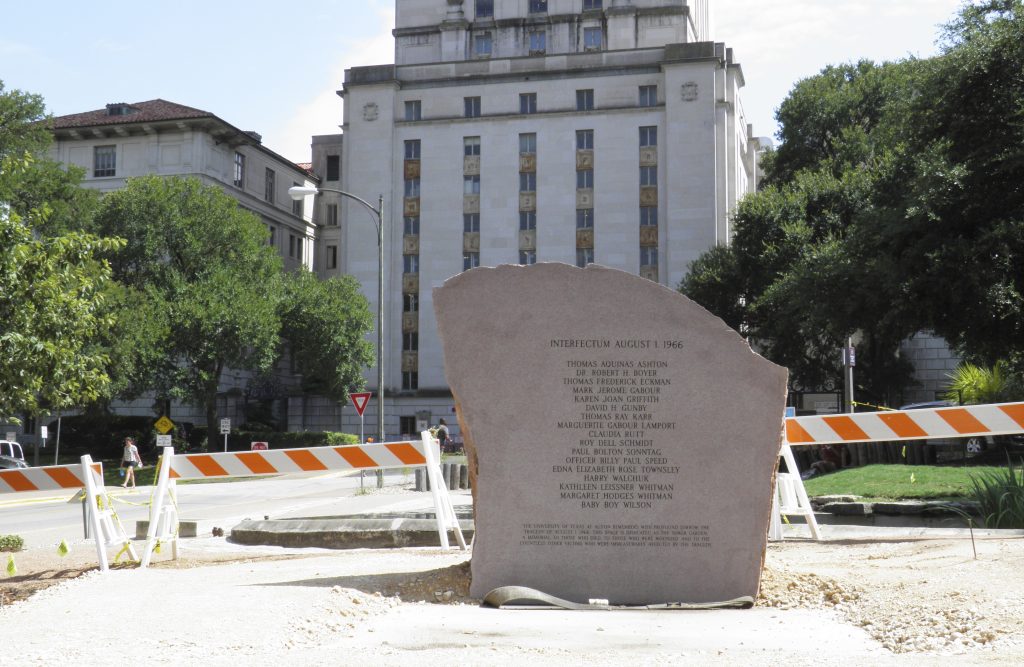 A stone memorial to the 16 people and one fetus who died in the August 1, 1966, mass shooting is seen ahead of it being officially delegated at a ceremony that marks the 50th anniversary of the killing at the University of Texas in Austin. Photo by Jon Herskovitz/Reuters

Monday also marked the day a new Texas law went into effect, allowing people with concealed carry permits to bring their handguns onto the campuses of Texas public universities, including classrooms and student unions.

Universities are also authorized to establish rules and regulations regarding the storing and carrying of handguns in certain areas on campus. For example, the law bans guns from sports arenas, research labs that house dangerous chemicals, and, depending on the school, dormitories.

J.B. Bird, a university spokesman, has called the convergence of the new law and the anniversary of the 1966 shooting “unfortunate timing.”

Three UT Austin professors sued the school and the state in July in an attempt to halt the law from taking effect. The professors said allowing guns in the classroom would stifle free speech by intimidation.

Private universities can still ban guns under state law. To date, Amberton University has been the only private school to adopt the new measure.

Community colleges have until August 1, 2017 to comply.

Texas is now the eighth state to permit those with concealed carry licenses to bring their handguns on university grounds, according to the National Conference of State Legislatures.

The organization, Students for Concealed Carry, said in a statement that no one in the Texas Legislature intended for the campus carry law to coincide with the anniversary of the mass shooting.

“We’ll have many years to celebrate the legalization of campus carry,” the organization said. “For one day, Texas can focus on the 17 lives lost and countless lives affected by the tragedy 50 years ago.”

Left: A student walks through the University of Texas campus in Austin, Texas, the site of a 1966 mass shooting that left 17 dead and more than 45 wounded. Photo by Jon Herskovitz/Reuters