524 schools drop out of the national school lunch program 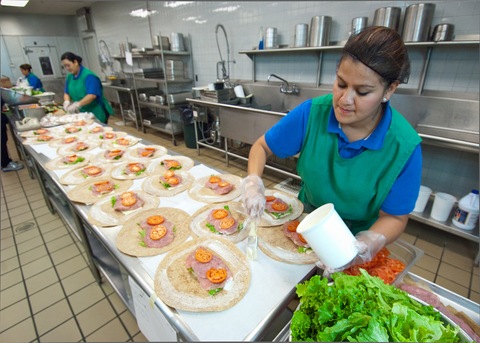 WASHINGTON — The Agriculture Department says 524 schools — out of about 100,000 — have dropped out of the federally subsidized national school lunch program since the government introduced new standards for healthier foods last year.

The new standards have met with grumbling from school nutrition officials who say they are difficult and expensive to follow, conservatives who say the government shouldn’t be dictating what kids eat and — unsurprisingly — from some children who say the less-greasy food doesn’t taste as good. But USDA says the vast majority of schools are serving healthier food, with some success.

Data to be released Monday by the department shows that 80 percent of schools say they have already met the requirements, which went into place at the beginning of the 2012 school year. About one-half percent have dropped out of the program.

In an effort to stem high childhood obesity levels, the new guidelines set limits on calories and salt, and they phase in more whole grains in federally subsidized meals served in schools’ main lunch line. Schools must offer at least one vegetable or fruit per meal and comply with a variety of other specific nutrition requirements. The rules aim to introduce more nutrients to growing kids and also to make old favorites healthier — pizza with low-fat cheese and whole-wheat crust, for example, or baked instead of fried potatoes.

If schools do not follow the rules, or if they drop out, they are not eligible for the federal dollars that reimburse them for free and low-cost meals served to low-income students. That means wealthier schools with fewer needy students are more likely to be able to operate outside of the program.

According to the USDA data, gathered from the states that administer the programs, 90 of the 524 schools that dropped out of the program said specifically that they did so because of the new meal-plan requirements. Most of the rest did not give a reason.

Some school nutrition officials have said buying the healthier foods put a strain on their budgets. A study by the Pew Charitable Trusts’ Kids’ Safe and Healthful Foods Project, also expected to be released Monday, said that 91 percent of school food officials the group surveyed said they face challenges in putting the standards in place, including problems with food costs and availability, training employees to follow the new guidelines, and a lack of the proper equipment to cook healthier meals.

But that study says 94 percent of the more than 3,300 officials surveyed said they expect to be able to meet all of the requirements by the end of this school year.

“It shows that this is certainly doable,” said Jessica Donze Black, director of the Pew project, which has lobbied for healthier foods.

Leah Schmidt, president of the School Nutrition Association and director of nutrition programs at a Kansas City, Mo. school district, said any schools that would consider forgoing the federal funds would have to have very few students eating the free and reduced-cost meals.

She agreed that many schools have met challenges in trying to meet the new standards, but she said that is to be expected.

“Any time you have something new, you’re going to have some growing pains,” she said.

As some schools struggled to follow the new guidelines at the beginning of the last school year, USDA relaxed some of the original requirements. In December, the department did away with daily and weekly limits on meats and grains that school nutrition officials said were too hard to follow.

Congress has also had its say on the new guidelines. In 2011, after USDA first proposed them, Congress prohibited USDA from limiting potatoes and French fries and allowed school lunchrooms to continue counting tomato paste on pizza as a vegetable.

The school lunch rules apply to federally subsidized lunches served at reduced or no cost to low-income children. Those meals have always been subject to nutritional guidelines because they are partially paid for by the federal government, but the new rules put broader restrictions on what could be served as childhood obesity rates have skyrocketed.

Schoolchildren can still buy additional foods in other parts of the lunchroom and the school. Separate USDA rules to make those foods healthier could go into effect as soon as next year.

Correction: The headline on this story was corrected to more accurately reflect information about why the 524 schools reported dropping out of the school lunch program.