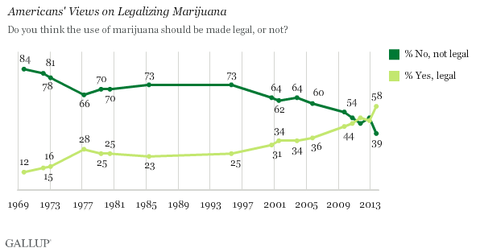 A Gallup poll released Tuesday finds that a majority of Americans — 58 percent — says marijuana should be legalized. Gallup reports that it’s the first time a clear majority has favored legalization since the organization began asking the question in 1969. More than 40 years ago, only 12 percent of the public supported legalization.

The poll also reports that 38 percent of Americans admitted to trying the drug.

Comparing the 58 percent rate found in this poll with Gallup’s other polls this year, Business Insider found that more Americans favor legalization than approve of the job President Barack Obama is doing (44 percent), favor attacking Syria (36 percent), view the Republican Party favorably (28 percent), or approve of the job Congress is doing (11 percent).