SACRAMENTO, Calif (AP) — Six people were killed and 10 injured in a mass shooting early Sunday as bars and nightclubs were closing in downtown Sacramento and police in California’s state capital were searching for at least one suspect.

Sacramento Police Chief Kathy Lester said at a news conference that police were patrolling the area at about 2 a.m. when they heard gunfire. When they arrived at the scene, they found a large crowd gathered on the street and six people dead. Another 10 either took themselves or were transported to hospitals. No information was given on their conditions.

Authorities don’t know whether one or more suspects were involved and are asking for the public’s help in identifying who is responsible. Lester did not give specifics on the type of gun used.

This is “a very complex and complicated scene,” she said. Lester issued a plea to the public, asking for witnesses or anyone with recordings of the incident to contact police. 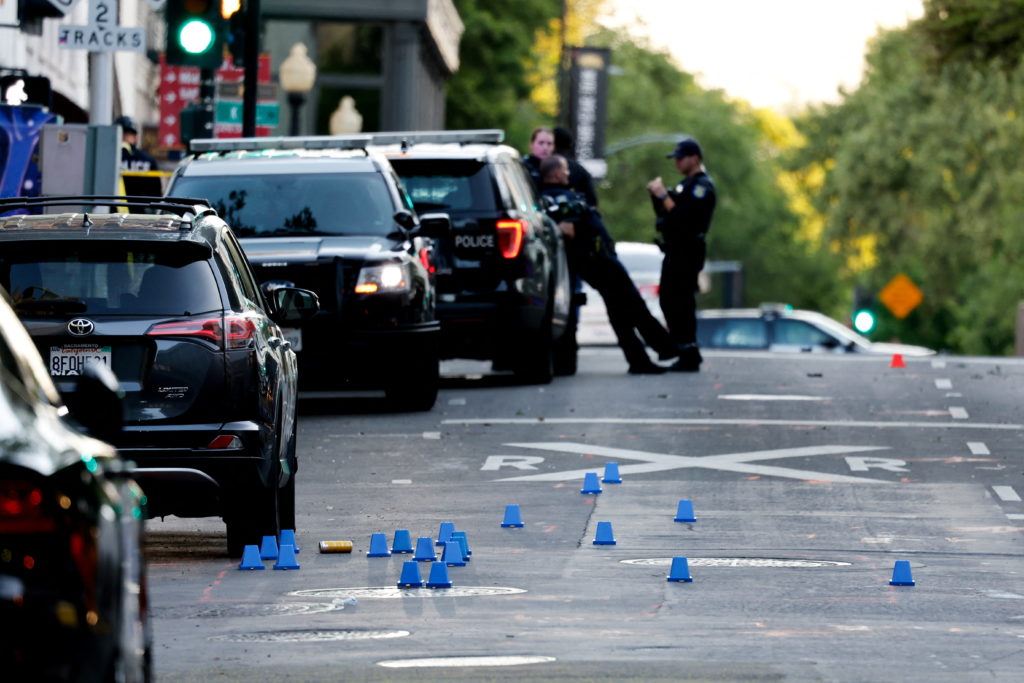 Evidence markers are seen on the ground at the crime scene after an early-morning shooting in a stretch of downtown near the Golden 1 Center arena in Sacramento, California, U.S. April 3, 2022. Photo by Fred Greaves/Reuters.

Shortly after the shooting, video was posted on Twitter that showed people running through the street amid the sound of rapid gunfire. Video showed multiple ambulances at the scene.

Sacramento Mayor Darrell Steinberg said on Twitter: “Words can’t express my shock & sadness this morning. The numbers of dead and wounded are difficult to comprehend.”

“Rising gun violence is the scourge of our city, state and nation, and I support all actions to reduce it,” he said.

Residents were asked to avoid the area, which is packed with restaurants and bars, including the London nightclub.

Kay Harris, 32, said she was asleep when one of her family members called to say they thought her brother had been killed. She said she thought he was at London.

Harris said she has been to the club a few times and described it as a place for “the younger crowd.” Bars and clubs close at 2 a.m. and it’s normal for streets to be full of people at that hour.

She has spent the morning circling the block waiting for news.

“Very much so a senseless violent act,” she said.

Steve Hicks was staying at the Citizen hotel with his fiancé and two daughters after attending a Tyler the Creator concert at the Golden One Center. He said he did not hear gunshots but the sirens woke him up.

Police have the streets around the club closed, with yellow police tape fluttering in the early morning breeze.

Berry Accius, a community activist, said he came to the scene shortly after the shooting happened.

“The first thing I saw was like victims. I saw a young girl with a whole bunch of blood in her body, a girl taking off glass from her, a young girl screaming saying, ‘They killed my sister.’ A mother running up, ‘Where’s my son, has my son been shot?’“ he said.

Left: People hug near the crime scene after an early-morning shooting in a stretch of downtown near the Golden 1 Center arena in Sacramento, California, U.S. April 3, 2022. Photo by Fred Greaves/Reuters.