We’re officially living in the future

The future is now. Or at least, it will be here in October.

In the 1989 sci-fi comedy “Back to the Future Part II,” characters Marty McFly, Doc Brown and Jennifer use the famous outfitted DeLorean time machine to travel from the year 1985 into the future. The date? Oct. 21, 2015.

The film’s version of the future is complete with technology that has sadly yet to be invented, including flying cars, self-tying shoes and — despite a 2014 hoax that tried to prove otherwise — hoverboards.

Our 2015 won’t be entirely removed from Marty’s future, however. Flat screen televisions have existed for a few years, hands-free video games are currently on the market and video conferencing can be utilized through services such as Skype, Google Hangouts and Apple’s Facetime. Not to mention, a major league Miami baseball club, which didn’t exist in 1989, now exists in the form of the Miami Marlins.

On that note, the movie has the Chicago Cubs winning the 2015 World Series in a sweep against a Miami baseball team. While their 2015 Major League Baseball counterparts can’t face each other in the Fall Classic due to both teams residing in the National League, there is still a chance that the Cubs — who have not won a championship since 1908 or appeared in a World Series since 1945 — can claim the title of World Champions next October.

For planetary scientists, 2015 is the “year of Pluto”, said Alan Stern, principal investigator of the New Horizons Mission. On July 14, 2015, at 7:49 a.m. EDT NASA’s New Horizons probe will make its closest approach to Pluto. Nine years after its launch and three billion miles from Earth, New Horizons will be the first spacecraft to get close-up photos of the dwarf planet.

Scientists know next to nothing about Pluto, Stern said. The only images of Pluto to date are from the Hubble Telescope, which only show a blurry dot. New Horizons will not only photograph Pluto and its moons, it will gather information on its geology and atmosphere before sailing on to study objects from the early solar system in the Kuiper Belt.

“We’re not going to rewrite textbooks. We’re going to write textbooks for the first time,” he said. “The lesson of my field is that every time we send a spacecraft on reconnaissance missions like this we’re blown away.”

Pluto will also celebrate its 85th “birthday” on February 18, marking the anniversary of its discovery in 1930. 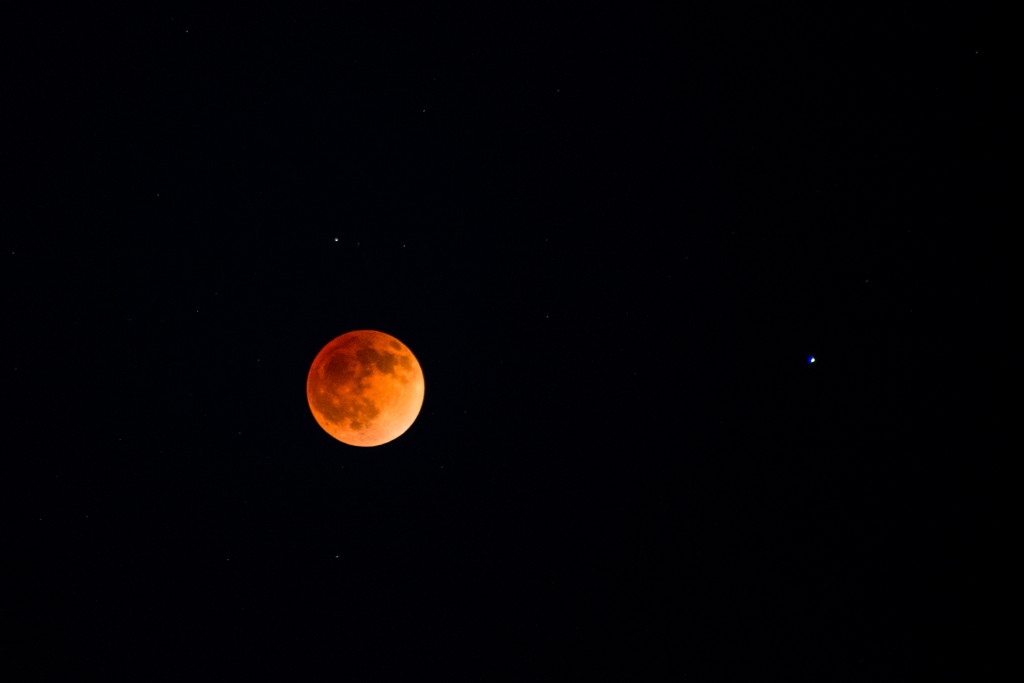 While we’re on the topic of space, a blue moon, Jupiter in opposition and a “blood moon” make 2015 a good year for stargazers


Apart from exploring new planets, 2015 is a good year to watch the night sky. In July, there will be a blue moon, the first in three years. Astronomically speaking, it’s not that interesting, said Lucianne Walkowicz, astronomer at the Adler Planetarium in Chicago. A blue moon is not actually blue, but a second full moon in a month, she explained.

But 2015 has more spectacular sights for stargazers. On Sept. 27, starting around 8 p.m. EDT, a full lunar eclipse begins. The moon will turn a dark shade of red by 10:45 p.m. This is the third “blood moon” out of four in two years — an unusually high number so close together.

It’s a good year to see several planets too, she said. After the new moon on Jan. 22, Mars can be seen as a bright orange dot near the moon. In early February, Jupiter will be “in opposition”, meaning it will be fully illuminated by the sun and brightly visible in the night sky. It will be visible again to the naked eye in mid-June, low in the western sky just after sunset next to Venus. And August 12 and 13, the Perseid meteor shower arrives.

“It’s a good time to get out of the city, find an open field, lay down a picnic blanket and watch the stars go by,” Walkowicz said.

The narrator in ‘Fight Club’ gets married

If you’re familiar with “Fight Club” — a Chuck Palahniuk novel-turned-David Fincher film about an unnamed insomniac and a mysterious Tyler Durden who together start an underground fighting club — then you know about the rules. And the first rule of fight club is: You do not talk about fight club.

So we’re not going to talk about the fact that the sequel to Palahniuk’s book is expected to come out in May, over a decade after the 1996 original. We won’t even mention that it’s being released as a 10-part comic book series illustrated by artist Cameron Stewart for Dark Horse Comics. Don’t you dare expect us to utter a word about where it picks up — 10 years later, with the unnamed, now middle-aged, narrator married to Marla Singer and father to their nine-year-old son Junior. Is Tyler Durden back, you ask? Absolutely. But we’re not saying.

On Sept. 9, 2015, the queen regnant’s reign will overtake Queen Victoria’s record of 63 years and 217 days on the throne. While this won’t make Queen Elizabeth the longest-serving monarch or even the longest-serving head of state (living or dead), her reign says remarkable things about her endurance. She’s not “schlepping around the world” as much as she used to, she’s healthy, vigorous and carries on a number of royal duties, said former NewsHour foreign affairs editor Michael Mosettig.

“She’s been the symbol of continuity in a country that has gone vast changes,” said Mosettig. “When she first took the throne, there were still food rations. Now, Britain is one of the most economically stable, best performing countries in Europe.”

And while she does not have the power to make or pass legislation, the length of her reign is notable because she has consistently filled the role as constitutional monarch as it was envisioned.

The queen is “a connection to the past, yet, she has modernized the monarchy in incremental ways,” said Sally Bedell Smith, author of “Elizabeth the Queen: The Life of a Modern Monarch.” She has not meddled in politics, all the while remaining popular. Many in Britain fear that when her son Charles assumes the throne, he will destroy the good will of the monarchy by getting too involved.

While this is supposition, said Mosettig, Queen Elizabeth could be the last hands-off constitutional monarch that Britain sees.

The Large Hadron Collider is back in business

In July of 2012, particle physicists at the Large Hadron Collider announced they had found the Higgs boson, the so-called “God particle”. The Higgs boson explains why everything has mass. It’s the lynch pin of the Standard Model of physics, and finding it was a momentous occasion for physics, a discovery 48 years in the making.

While finding the Higgs boson was a breakthrough, there are still hundreds more questions to be answered: Are there other kinds of Higgs bosons? What particles make up dark matter?

“More energy means more access to unknown particles,” Kaplan said in an email. “Either new particles or strange Higgs properties will point to new laws of physics beyond the semi-complete Standard Model, and will give us a hint of where to look next.” 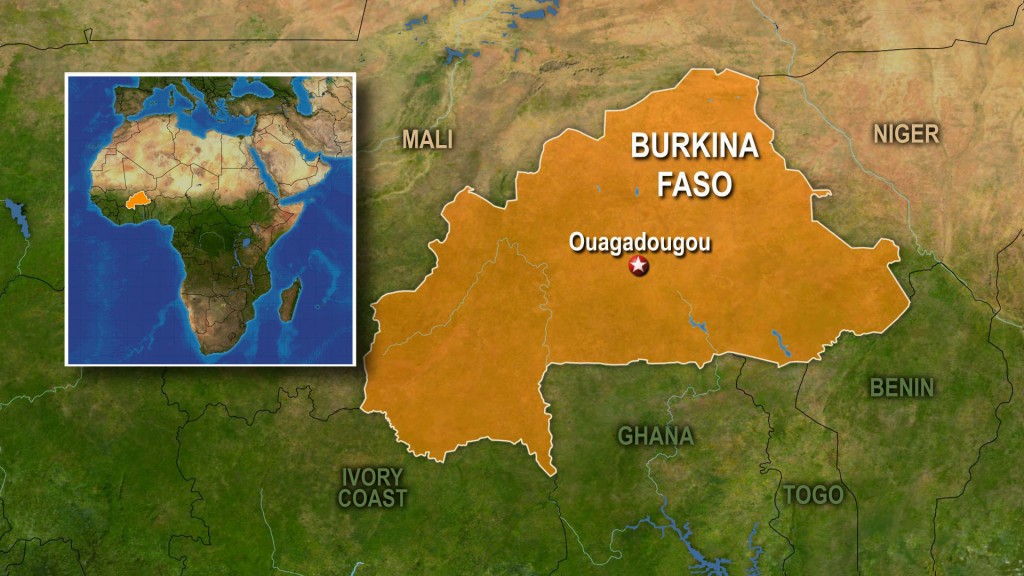 Burkina Faso will hold its presidential election in November. Map of Burkina Faso by Calvin Solomon

Next fall, Burkina Faso will hold a presidential election and take its first steps toward a democratic government. The historic move is one of three major elections whose outcomes will determine political stability in West Africa next year. Nigeria is up first with an election in February, Côte d’Ivoire will follow in October and Burkina Faso is last in November. Not only are these elections possible indicators of more stable democracies, they could lead to the cap on regional terrorism if the results are accepted by the people.

According to John Mukum Mbaku, a senior fellow at the Brookings Institute, Burkina Faso has been an important partner in the U.S.’ war on terrorism. If elections are not found to be fair, credible and free, Burkina Faso and its neighbors could succumb to instability, which attracts regional terrorist groups. The outcomes of Burkina Faso, Nigeria and Côte d’Ivoire’s elections could very well mean the spread of regional terrorist groups like Boko Haram, or it could contribute to their end.

2015 is palindrome in binary

Editor’s note: An earlier version of this story misspelled Lucianne Walkowicz’s name. That error has been corrected.