8 things you didn’t know about beer

Today is National Beer Day, and beer is doing rather well these days. Sales in all types of American beer increased last year, resulting in a total value of $101.5 billion for the industry. On top of that, a craft beer renaissance is rapidly expanding the choices of beer available to Americans, although Bud Light is still the nationally preferred drink.

That cold brew you may be drinking today has been places — from the testing site of nuclear bomb to different states of matter. Here are 8 things to keep in mind the next time you enjoy a glass:

1. Beer could survive a nuclear apocalypse.

During the Cold War, scientists dropped nuclear bombs on beer cans to see whether they would be safe to drink. They found that as long as the beer was “1,270 feet from Ground Zero” and not hit by debris or anything else, they were still drinkable.

2. 200 years ago, a flood of beer claimed eight lives in London.

On Oct. 17, 1814, eight people died and five were wounded after 3,500 barrels of beer gushed through the walls of the Meux and Co. brewery in London and wrecked two houses within its path. On the 200th anniversary of the tragedy last year, a nearby bar offered free roasted chestnuts and three distinct porters.

3. The White House is a craft brewery.

4. At the current rate, we may have as many breweries as Americans did in the 19th century.

Breweries have seen their ups and downs over the last century and a half, but a recent spike in the number of U.S. breweries could make Gilded Age beer lovers rejoice. According to the Brewers Association, the United States had more than 4,000 breweries in 1873. This was followed by a steady decline over the turn of the century and then a drop to zero (legal breweries) in the Prohibition Era. Breweries returned in the 30s, but declined again during the 20th century as only a few major breweries dominated beer production. With the explosion of craft beer in the 21st century, there were 3,464 breweries in the U.S. as of 2014. Take a look at this map to see where today’s largest craft breweries are. 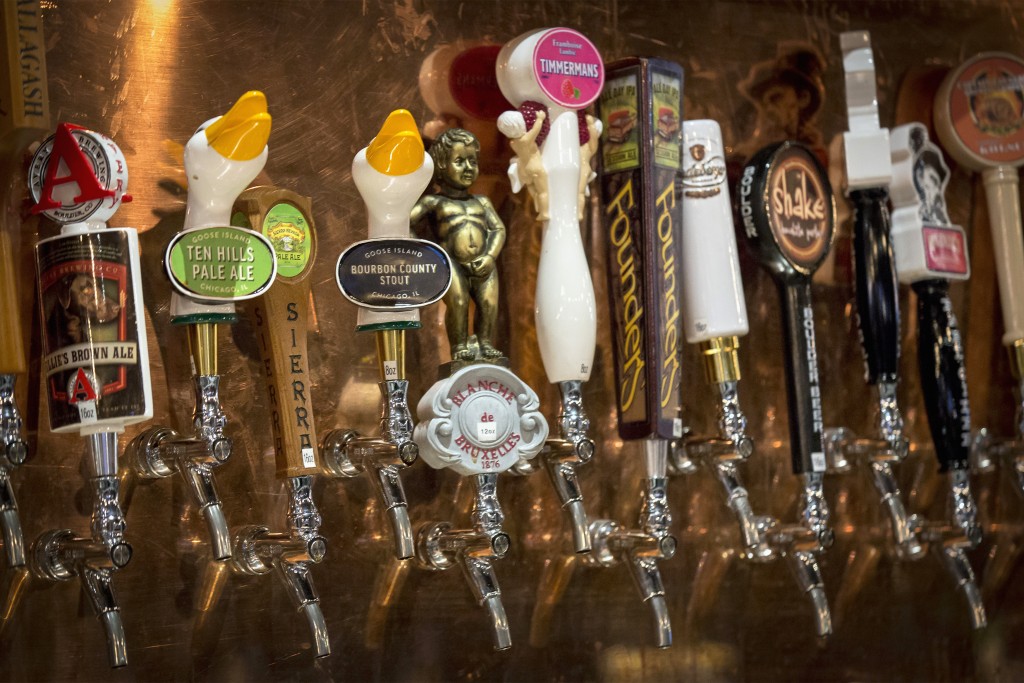 Modern pumpkin beer got its start in the early 1980s after a brewer drew inspiration from a story of George Washington’s squash-brewed beer. More than 30 years later, that one brand has been joined by 500 different varieties that combine different spices to produce unique pumpkin flavors.

A study of geotagged tweets with the words “church” and “beer” in them found that Americans post more about beer on Twitter than they do about church. But the results aren’t spread evenly, with much higher concentrations of church-related tweets in the American southwest than the rest of the country.

7. The science of why tapping a beer on the top will trigger a foam explosion.

Banging the bottom of a beer bottle on the top of another will cause an explosion of foam and a lot of wasted beer. The phenomenon is explained by the shape of the bottle, whose skinny neck and wide handle causes changing pressure waves to rapidly expand and contract small bubbles upon impact. This sets off a cycle of bubbles bursting and absorbing carbon dioxide as they rise to the top of the bottle.

8. Cold beer is a recent invention.

Very few people drink warm beer today, but hot ales were common in pre-industrial times as both a source of comfort and their perceived nutritional value. In fact, these ales often served as meals and could be combined with milk or cream to produce a soupy, hearty drink.

Editor’s note: This post has been updated with a new fact in the No. 2 spot. We had incorrectly reported that Belgium boasts the most varieties of beer.

Left: Today is National Beer Day in the U.S. Although this photo is from the opening ceremony for Munich's Oktoberfest in 2013, we thought it captured the spirit of America's love of the bitter brew. Photo by Michael Dalder/Reuters