8 things you didn’t know about hemp

Tucked away in that legislation was an amendment granting states and universities the right to research a plant that has long been banned from cultivation in the United States — hemp.

Hemp production was banned throughout the United States in 1937, with the passing of the Marihuana Tax Act. Two weeks ago, North Carolina’s House and Senate passed a bill that would legalize the production of industrial hemp in the state. 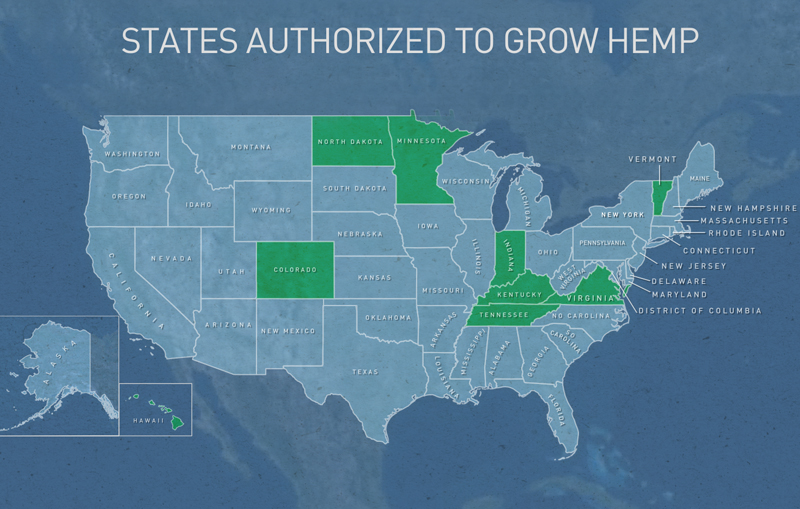 Marijuana and hemp are varieties of cannabis that developed due to selective breeding: Hemp for its fiber and marijuana for its narcotic components.

While the two look and smell-alike, they are chemically and structurally different. 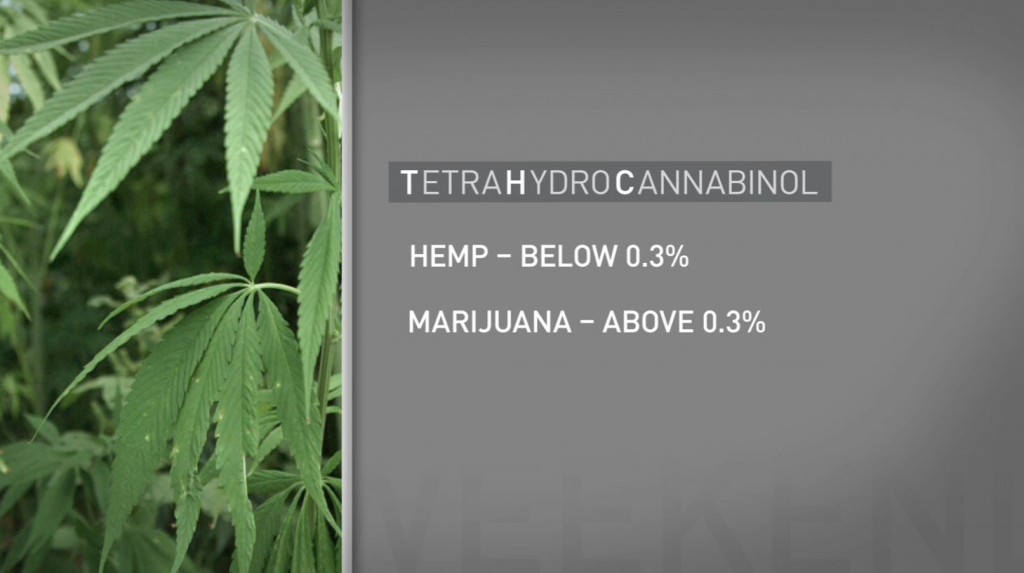 The major difference between the two is the levels of Tetrahydrocannabinol (THC) — or the chemical in marijuana that gets people high. Graphic by Lisa Overton/PBS NewsHour Weekend

The major difference between the two is the levels of Tetrahydrocannabinol (THC) — or the chemical in marijuana that gets people high.

Hemp has virtually no trace of THC, while pot has around 10 percent; some strains of marijuana can have as much as 27 percent THC.

Here are eight things you may not have known about hemp.

1. Hemp will not get you high, but it may give you a headache.

Hemp contains just .3 percent of THC, the chemical that can cause feelings of euphoria. If you were to ingest hemp seeds with the hopes of getting high, you won’t — and you might get a headache instead.

You might also feel as if you had taken a strong laxative, as studies have shown hemp seed to have significant constipation-curing qualities.

2. Natives of a small island off the coast of China may have been the first to use hemp.

On mainland China during Second Century B.C., people made clothes from hemp.

And hemp’s use as a cloth for swaddling infants and covering the bodies of the dead was mentioned in the sacred Confucian texts known as the “Book of Rites”.

3. Common household items can be made with hemp, from birdseed to ice cream. 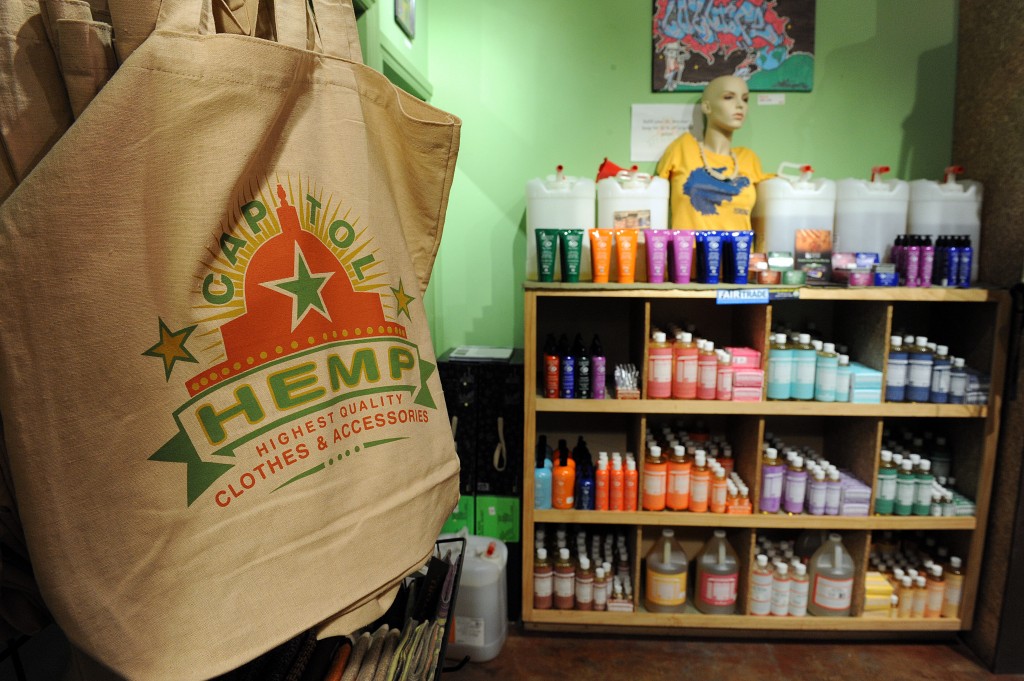 Hand bags and bath products are among the many hemp products for sale at the “Capitol Hemp” store on May 20, 2010 in the Adams Morgan neighborhood of Washington, DC. Hemp is not marijuana, but its resemblance to its cannabis cousin has kept the plant banned in the United States for decades despite a variety of uses for textiles, food, cosmetics and other purposes. Photo by Tim Sloan/AFP/Getty Images

Hemp fiber has long been valued for its strength and versatility.

The North American Industrial Hemp Council estimates that hemp can be used to make more than 25,000 products, from the paper pages of Bibles to building materials for homes.

The fibers were used to make rope, boat caulking and sails during the time of the Vikings. The word canvas can be traced back to the Greek kannabis and Latin cannabis, or hemp.

Historians claim America’s first flags were made of hemp cloth.

Henry Ford fashioned a car panel from a plastic derived from straw, pine, hemp and ramie in order to help farmers during the Great Depression, according to a Aug. 14, 1941 New York Times article.

And because hemp oil penetrates better than linseed oil, it has been used as an industrial lubricant, Charles T. Ambrose of the University of Kentucky School of Medicine and the author of “Transylvania University and its Hemp Connection” told PBS NewsHour.

Just last week, Bruce Dietzen drove from Florida to Colorado in a fiery red convertible made out of hemp. Dietzen modeled the car that runs on corn after Mazda’s sporty Miata.

“One version gets you high. The other version you can make a car out of. They’re both cannabis,” he told the Denver Post.

4. In the 1600s, property owners in North America had to grow hemp.

By way of a royal decree, King James I required every property owner in Jamestown to grow 100 plants of hemp for export in 1619, according to “Hemp: American History Revisited: The Plant with a Divided History” by Robert Deitch.

The hemp was used to provide cordage and canvas for British ships, Ambrose said.

Similar hemp decrees were later issued in Connecticut and Massachusetts. 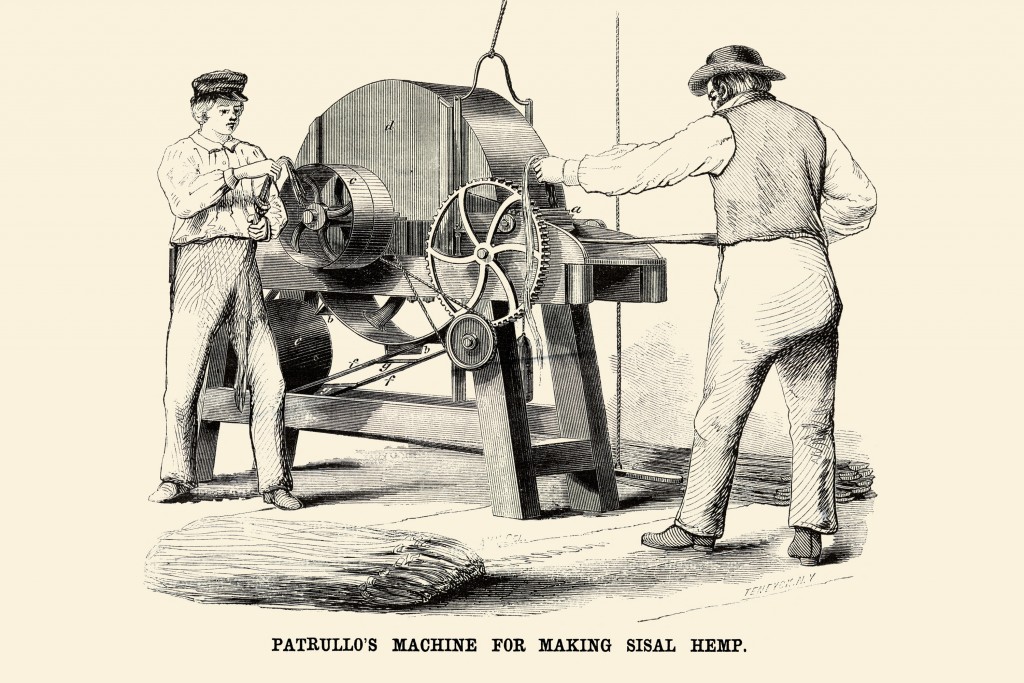 Hemp was vital in almost every part of an industrial society and it is the raw material for rope, as shown in this picture circa 1883. Without rope, ships could not sail and heavy cargo could not be loaded, fish could not be caught and water would remain in the wells. Photo by Buyenlarge/Getty Images

5. What do Woody Harrelson and Mitch McConnell have in common?

Why a fondness for hemp, of course.

The former “Cheers” star and current Senate majority leader and Kentucky’s state senator have been on separate, but parallel crusades to make hemp legal again  in the U.S.

He then made a movie called “Hempsters: Plant the Seed” in 2010.

“We are laying the groundwork for a new commodity market for Kentucky farmers,” McConnell told Politico Magazine. “And by exploring innovative ways to use industrial hemp to benefit a variety of Kentucky industries, the pilot programs could help boost our state’s economy and lead to future jobs.”

That was the name of a U.S. Department of Agriculture-run program to encourage farmers to grow hemp during World War II.

Faced with a shortage of Manila hemp that was imported and used in ship’s rigging, the U.S. government had to act quickly.

The answer? Grow hemp on U.S. soil, where it had thrived – especially in Kentucky – more than a century before.

For decades the program was thought to be a myth, until the late 1980s, when a group of hemp activists reportedly found copies of the “Hemp for Victory” video in the Library of Congress archives.

The Oil found in hemp seed is rich in gamma linolenic acid (GLA), a nutritious unsaturated fatty acid, which is also found in breast milk.

In addition to GLA, hemp seed oil is packed with other omega-3 and 6 fatty acids, making it a healthier alternative to many other vegetable oils, Ambrose told PBS NewsHour.

8. Leftover hemp stalks can be used to store energy.

Last year, a team of scientists led by David Mitlin at the University of Alberta made a supercapacitor, an energy storage device, out of leftover hemp, the BBC reported.

While supercapacitors store less energy than regular batteries, they can be charged in a shorter amount of time and deliver that energy in a speedier fashion.

Mitlin told the PBS NewsHour that these supercapacitors are great for things that need a fast, potent burst of energy — like charging an iPhone in minutes for two hours of talk time.

For their experiment, Mitlin’s team cooked down discarded hemp stalks that were being stored by the government in Alberta, Canada, where it is legal to grow industrial hemp.

Want to learn even more about hemp? Watch PBS NewsHour Weekend’s report from Kentucky, where officials and farmers are experimenting with creating a new industry around this plant: