8 things you didn’t know about Pac-Man

Today marks 35 years since Pac-Man debuted at a movie theater in the Shibuya area of Tokyo. Since then, the game has become one of the most popular of all time, producing more than eight other versions, a television series and more than 400 products. A few facts to think about the next time you’re playing Pac-Man at your local laundromat or on Google Maps:

1. The game’s creators did not expect the game to be popular.

Toru Iwatani, Pac-Man’s game designer who worked for Japanese software company Namco at the time, said he expected its relatively slow pace to repel players in the U.S. and Europe. “At that time, what was popular overseas were more thrilling games, and I felt that perhaps the rhythm of Pac-Man wasn’t matching the needs of overseas users,” he said in an interview with Wired.com.

2. The game was inspired by food and created to attract female players.

At the time the game was created, video games centered on violence and were marketed primarily at men, Iwatani said. Iwatani wanted to create a game that would attract female players, and according to him, the way to do so was by focusing on dessert. “I decided to theme the game around ‘eating’ — after eating dinner, women like to have dessert,’” he told Wired. Iwatani has been criticized for that statement, including by feminist game critic Anita Sarkeesian, who noted, “Luckily, Iwatani’s regressive personal or cultural notions about women are not reflected in the finished game itself.”

3. The game’s creators did not receive any special rewards for its creation.

Iwatani described his company’s reaction to the game in an interview with VH1 Games in 2007, saying: “I’m not sure if I should mention this or not. Well, um, the truth of the matter is, there were no rewards per se for the success of Pac-Man. I was just an employee. There was no change in my salary, no bonus, no official citation of any kind.”

4. The ghosts have different personalities.

The four ghosts, named Blinky, Pinky, Inky and Clyde, were each created with distinct “personalities” to keep the game from being too monotonous, Iwatani has said. The four ghosts have alternate names, respectively, of Shadow, Speedy, Bashful and Pokey, which reflects their behaviors in the game.

5. It’s not just for humans

A 2000 episode of “Champions of the Wild,” a television show that ran 1997-2002, appears to show a bonobo named Kanzi playing Pac-Man. Kanzi currently lives at the Great Ape Trust in Des Moines, Iowa.

When MIT students Doug Macrae and Kevin Curran designed an extension for Pac-Man called Crazy Otto, they unwittingly created the first version of Ms. Pac-Man. Macrae and Curran’s game originally created Crazy Otto as an enhancement kit to Pac-Man and sold it to Pac-Man’s distributor Midway. The team changed the name to Pac-Woman and then Miss Pac-Man, but that name drew doubts from the company since an animation between levels showed the couple having a baby (apparently out of wedlock). As a result, the team settled on Ms. Pac-Man.

In an article on video games in 1981, Time published a photo of a Crazy Otto game and labeled it as Pac-Man before the game had been released, according to Macrae. At the time, there was only one Crazy Otto game on display at an arcade in Framingham, Massachusetts. “The reporter, or the cameraman for that reporter, happened to go into that arcade, take a picture, pay no attention to it and it got published in Time Magazine,” Macrae said in a speech at annual game show California Extreme in 2010. 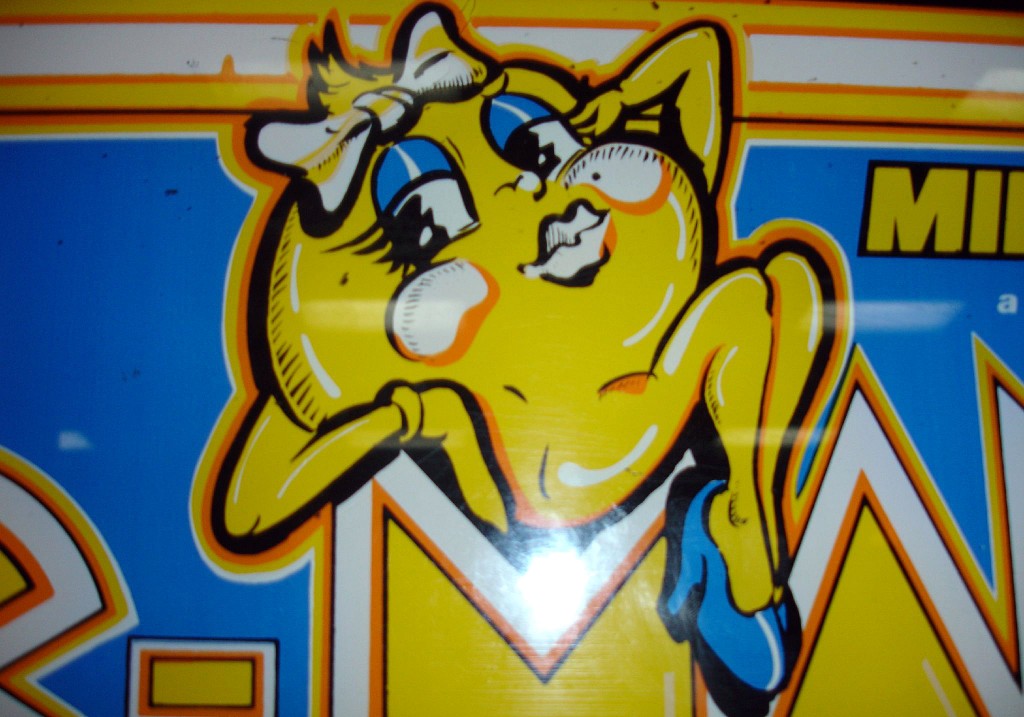 Ms. Pac-Man is widely considered the first female protagonist of a popular video game, but also one of the most divisive. Sarkeesian criticized the Ms. Pac-Man game for perpetuating the “Ms. Male” trope in video games, saying that Ms. Pac-Man as a character relies on the existence of Pac-Man, a male default. But others have celebrated the character. In a segment for The Daily Show, Kristen Schaal said, “Ms. Pac-Man is a feminist hero. She didn’t subscribe to your patriarchal idea of what a woman’s body should look like. She ate whatever she wanted: pineapples, pretzels, ghosts…”