Of all the Supreme Court Justices, Sonia Sotomayor is arguably the most visible outside of the courtroom. Her journey from a Bronx housing project to the United States Supreme Court has been chronicled by many, including Sotomayor herself in her bestselling memoir, “My Beloved World.”

In spite of all that is known about Justice Sotomayor, judicial biographer and Reuters legal affairs editor Joan Biskupic believed there was more to discover. She discussed her new book, “Breaking In: The Rise of Sonia Sotomayor and the Politics of Justice,” with PBS NewsHour’s Gwen Ifill. Here are a few lesser known facts she helped uncover.

1. She helped Ruth Bader Ginsburg cope with her husband’s death

In the opening pages of “Breaking In,” Biskupic describes how Sotomayor shook up tradition at her first end-of-term party by asking the other justices to salsa dance with her.

In what Biskupic describes as the “most compelling” moment of this episode, Sotomayor approached Justice Ruth Bader Ginsburg, whose husband had passed away just three days prior, and asked her to dance. When Ginsburg initially refused, Sotomayor leaned in and whispered to her, “Marty would have wanted you to dance,” referring to Ginsburg’s late husband. After joining her on the dance floor briefly, Ginsburg placed her hands on Sotomayor’s cheeks and simply said, “Thank you.”

2. She was born the same year as Brown vs. Board of Education

Sotomayor has described herself as “the perfect affirmative action baby.” In April, when the court upheld an amendment to the Michigan state constitution banning racial affirmative action, she issued a 58-page long dissent (over three times as long as the opinion upholding the law), which made clear that she believes it is the court’s role to defend the civil rights of “historically marginalized groups.” It is fitting that she was born shortly after this landmark ruling in favor of educational equality.

“She clearly was playing off of his view in a kind of mocking way,” Biskupic says, “and in fact, Chief Justice Roberts criticized Justice Sotomayor for doing that…he said that she was expounding policy preferences, but then he also said that he did not like the airing of personal strains.”

Sotomayor’s jab at Roberts revealed a personal disagreement, but Biskupic insists the dissent as a whole was rooted in Sotomayor’s professional opinion. “Most of it was based on her legal reasoning and what she thought of precedent. So she weaves in sentiment from personal experience, but it is all based in the law.”

4. She “leaned in” during the nomination process

In “Breaking In,” Biskupic points out that no judicial nomination moves “without some pushing and shoving,” and “minorities and women…faced greater resistance.” She reports that in 1991, when President George H. W. Bush nominated Sotomayor to the U.S. District Court, minorities accounted for only around 10 percent of federal judges, a mere 12 percent were female and, in the state of New York, there were no Hispanic federal judges.

Biskupic was surprised to learn how active Sotomayor was in pushing for her own nomination. “I didn’t know how much she had been an agent for herself,” Biskupic said, in discussing how Sotomayor worked, first with Democratic New York Sen. Daniel Patrick Moynihan to secure her nomination to the U.S. District Court, and later with Republican New York Sen. Al D’Amato, to ensure a Senate floor vote on her elevation to the Second Circuit. “She was accustomed to pushing overtly for what she wanted,” Biskupic writes in “Breaking In,” adding that “her confidence surprised Moynihan” when the two first met to discuss her nomination.

5. She wields influence behind the scenes

There have been many times, Biskupic says, when Sotomayor “has been willing to break off and write some solo dissents or concurring opinions that break from her liberal colleagues … It’s a variety of cases where she’ll go a little bit further to left.” However, in “Breaking In,” Biskupic tells of at least one instance where the justice agreed to compromise.

Prior to ruling on the Michigan state ban on affirmative action, the court heard another case that challenged the race-sensitive admissions policy of the University of Texas at Austin. This case presented an even greater challenge to affirmative action by calling into question a precedent-setting ruling. In her book, Biskupic reveals that Sotomayor, greatly concerned about the way the Court appeared to be leaning, wrote a fiery dissent that was circulated privately among the justices, and ultimately led some of her more conservative colleagues to agree to a compromise.

“It all went on in secret,” Biskupic told NewsHour’s Gwen Ifill, “it was her work behind the scenes that…in effect, saved affirmative action for another day.”

6. She shops at Costco

Back in June, Sotomayor appeared to surprise Hillary Clinton at Clinton’s book signing at an Arlington, Virginia, Costco. The justice picked up a copy of the former secretary of state’s book and shook hands before departing. While some speculated that the meeting was in fact a planned photo-op, Sotomayor told The Washington Post that it was pure coincidence.

“A nice lady at the pharmacy counter recognized me, and we started chatting, and she says, ‘Are you here with the other lady?’ And I said, ‘What other lady?’ And she mentioned Madam Secretary, and that’s how I found out.”

7. She rescheduled on the Vice President of the United States

When Vice President Biden requested that Sotomayor swear him in at the January 2013 inauguration ceremony, she agreed, but asked that the event be rescheduled from 12 p.m. to 8 a.m. because she had committed to a book signing in New York City later in the day. Some eyebrows were raised when it was revealed that the vice president and the president would not be sworn in at the same time, but Biden himself did not seem to mind. At the conclusion of the ceremony, Biskupic writes, Biden thanked Justice Sotomayor, saying it was “a wonderful honor” to be sworn in by her. “We are going to walk out,” he continued, “you see her car’s waiting so she can catch a train I hope I haven’t caused her to miss.” 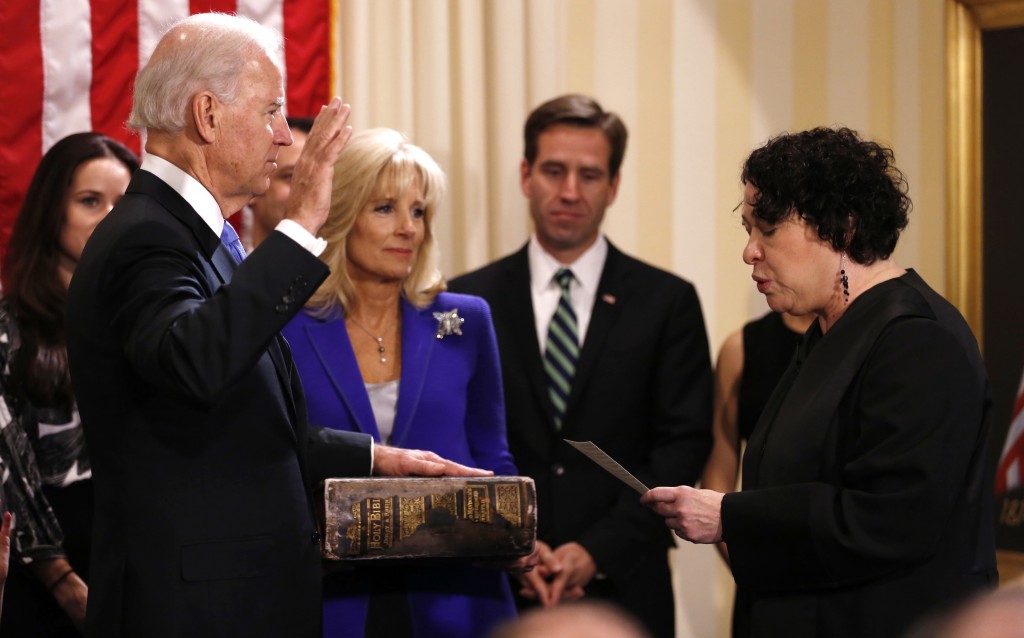 8. She is a workaholic

Below is video evidence that the justice couldn’t even step away from the bench long enough to have a cup of coffee with a friend!