In the week after a former student opened fire at his high school in Parkland, Florida, killing 17 people and wounding 17 more, 71 percent of Americans said they wanted stricter gun sale laws. A year later, that enthusiasm has faded to 51 percent, a thin majority, according to the latest poll from the PBS NewsHour, NPR and Marist.

The school shooting was the country’s latest high-profile mass shooting, a kind of tragedy that has unfolded in schools, shopping malls, movie theaters, restaurants and concert venues in recent years.

This time, students nationwide walked out of schools and protested in the aftermath, spurring the March For Our Lives movement, calling for improved safety and some way to restore the feeling they could attend class without getting shot. 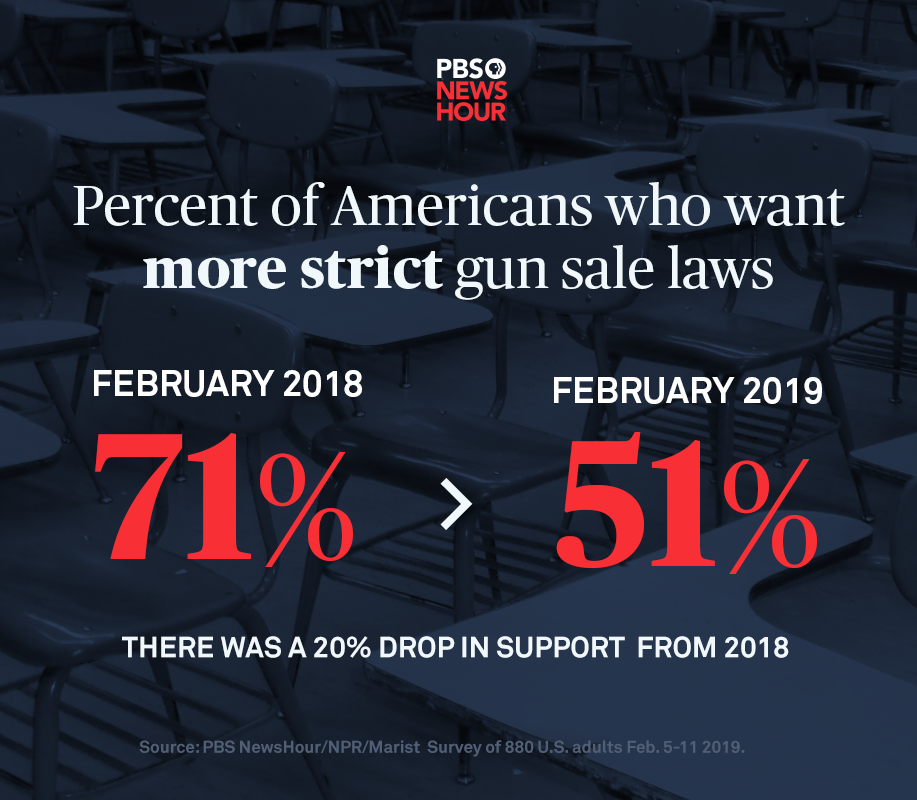 The national desire to find a way to prevent another school massacre was so strong in that moment that nearly all Democrats and a majority of Republicans and independents said they wanted stricter regulations on gun sales, according to historical polling data from Marist.

Today, a year after the shooting, people are divided by partisan politics when asked if they still want to tighten gun sale laws. Eighty percent of Democrats and more than 50 percent of people who identify as politically independent said laws around gun sales needs to be more strict. They are joined by a fifth of Republicans.

The political will to demand action from Congress has also diminished with time. Last April, 52 percent of Americans said Capitol Hill should immediately prioritize stricter gun legislation. Now, that sense of urgency has shrunk, to 42 percent. Another 27 percent of Americans thought then — as now — that these laws shouldn’t be a priority for Congress at all.

With that lack of urgency, it may not be surprising that Americans are pessimistic that the U.S. will figure out how to better protect people from gun violence.

Roughly half of Americans — 49 percent — foresee no change at all, and another 39 percent of respondents said gun violence will only worsen. Overall, 9 percent of U.S. adults said gun-related deaths and injuries will be less of a problem in years to come. When split into Democrats, Republicans and independents, 8 percent of respondents from each of those groups carried the hope that the nation’s gun problems will get better.

Support for more gun regulations has ebbed and flowed over the years. In December 2012, 58 percent of respondents said they wanted stricter laws on gun sales. That response was highest at 78 percent in September 1990 (at the time when political momentum was mounting against gun violence and assault weapons), and lowest in October 2011, at 43 percent.

Looking at their own communities, nearly a third of Americans — 30 percent — said they do not feel local classrooms and campuses are safe from the threat of guns. That feeling was especially pronounced among respondents of color, 39 percent of whom said nearby schools aren’t safe from firearms, compared to 24 percent of white respondents.

More than half of respondents — 53 percent — said they were somewhat worried a mass shooting could erupt at a local school. That response is virtually unchanged since January 2013 — weeks after a gunman shot and killed 20 children and six adults at Sandy Hook Elementary School in Newtown, Connecticut.

An estimated 1,200 children have died in the past year as a result of gun violence, according to the project “Since Parkland,” in which teen journalists partnered with The Trace, the Gun Violence Archive, the Miami Herald and McClatchy Newspapers to document each young life cut short by gun violence. Some were shot to death by accident. Others were killed by parents, by strangers, in their homes, on the street, while buying an iPhone.

That’s significantly more than days after the shooting, when 63 percent of Americans said the student protests that emerged after Parkland would amount to a political blip in the nation’s fraught relationship with guns.

Since Parkland, Jose Lopez, a high school junior in South Carolina, says he has not noticed much change around him.

“It feels like the same thing over again,” said Lopez, who attends Legacy Early College in Greenville, and talked to the PBS NewsHour Student Reporting Labs.

But that doesn’t mean the fight launched by students after Parkland is over. At the time of the shooting, Kim Leadholm said she was preparing to graduate high school in Black River Falls, Wisconsin. Since then, she says Parkland student survivors, such as Emma Gonzalez and David Hogg, have taught her the value of youth voices, including her own.

“It’s really disheartening having to think about your safety when you’re really trying to focus on your education.”

In the aftermath of the shooting, she told PBS NewsHour’s Student Reporting Labs that young people “seem to be pushed aside a lot in these political situations and this time I think that we are making it known that we are the future.”

A year later, Leadholm, a freshman at the University of Wisconsin-Madison, said she doesn’t think the debate has gone far enough to ensure there won’t be another Parkland.

“It’s really disheartening having to think about your safety when you’re really trying to focus on your education,” she said.

Left: An empty chair is seen in front of flowers and mementoes placed on a fence to commemorate the victims of the mass shooting at Marjory Stoneman Douglas High School, in Parkland, Florida, U.S., February 20, 2018. REUTERS/Carlos Garcia Rawlins