The Texas governor confirmed that 10 people were killed and another 10 injured following a shooting Friday morning at a high school about 30 miles southeast of Houston, Texas.

Republican Gov. Greg Abbott said in an afternoon briefing today that the shooting at Santa Fe High School was “one of the most heinous attacks that we’ve ever seen in the history of Texas schools.”

Republican Gov. Greg Abbott gave updates on the Santa Fe, Texas, shooting today. Watch his remarks in the player above.

Although several media outlets have reported the identity of the suspect, authorities have yet to confirm who was behind Friday’s shooting. The governor added that “one or two” people of interest were being interviewed by authorities about the shooting.

Here’s what we know — and don’t know — about the shooting this morning. 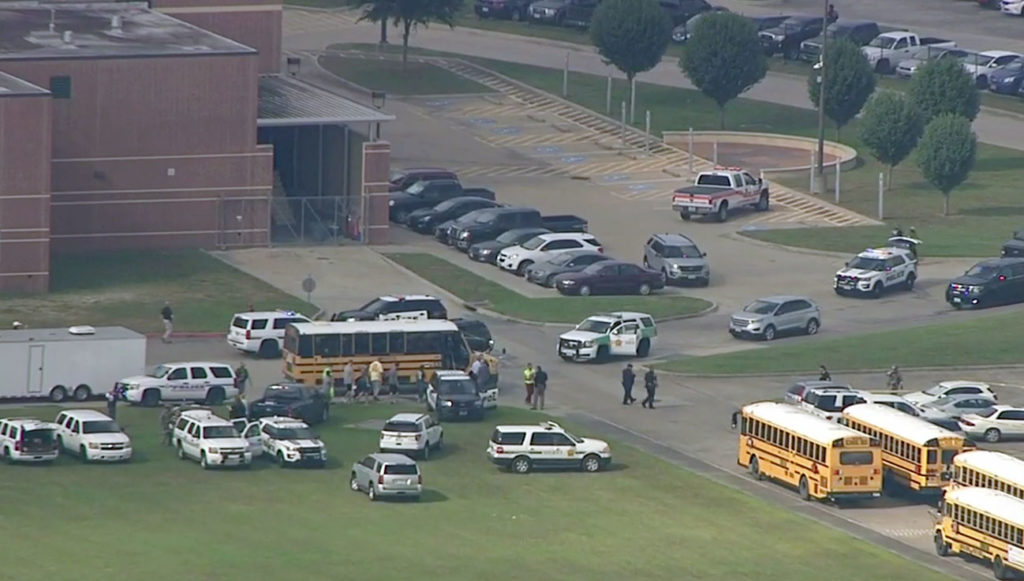 Witnesses told TV station ABC13 that the shooting happened during an art class around 7:45 a.m. local time. The school district posted on Facebook that the school was on lockdown minutes after 8 a.m. CT.

Shortly after initial reports of an incident, the Independent School District confirmed in a Facebook post that there was an “active shooter” at Santa Fe High School, adding that the situation was “contained” and that there have been “confirmed injuries.”

Authorities have yet to confirm exactly how the shooting unfolded this morning. Police said the investigation was ongoing as officers conduct more interviews and searches.

Aerials of the school showed a large police presence securing the building and bussing students to another location. Students were also seen lining up outside the school and emptying their backpacks for law enforcement officials.

Abbott confirmed that two weapons were used during the shooting, one shotgun and a .38 revolver. Neither were legally owned by the gunman, the governor said, adding that the weapons appeared to belong to the suspect’s father. It’s not immediately clear if the father was aware the guns were missing.

The Santa Fe Police Department and the Galveston County Sheriff are among the law enforcement agencies assisting at the scene amounting to a “multi-agency response,” police said.

Police and school officials also confirmed reports of explosive devices found on and off the school’s campus. Authorities told the community to be on the lookout for “suspicious items” and to immediately call 911 if they encounter anything in the surrounding area as police work to render these devices safe.

#UPDATE Possible explosive devices have been located at the school and off campus. Law enforcement is in the process of rendering them safe. School has been evacuated. Call 911 if you see any suspicious item. #HouNews #SantaFeISD

Abbott said police believe the devices were made by the suspect, including a molotov cocktail that had been found in the gunman’s home. The governor said authorities are currently unable to specify how many explosive devices were found.

The death toll was increased to 10 people, per the governor’s announcement hours after the shooting. Another 10 people were injured. The victims’ identities will be revealed at a later time, Abbott said.

Initially, Harris County Sheriff Ed Gonzalez told reporters that “eight to 10 people” had been killed in the shooting. Most of the dead are students, the sheriff said.

Local media reported that the victims have been transported to several local hospitals.

David Marshall, chief nursing officer for the University of Texas Medical Branch, told reporters that three victims were transported to that hospital: two are adults, one is a child. One of the adults, a man, was undergoing surgery for a gunshot wound to the upper arm, near his chest. The other adult is a woman who sustained a gunshot wound to her leg; she’s in fair condition.

The child is a 16-year-old boy who was also shot in the leg and is in fair condition.

Safi Madain, a doctor at Clear Lake Regional Medical Center, told reporters that eight patients transferred to the hospital appeared to all be high school students with gunshot wounds. Six of the eight patients have been treated and released. One patient remains in critical condition.

Earlier this morning, Gonzalez tweeted that a police officer was injured as well and that “the extent of his injuries are unknown.”

One witness told local TV station KTRK that a gunman opened fire during her art class. The student, who couldn’t confirm the identity of the shooter, said she saw one of classmates with blood on her leg as she escaped through another door to the classroom.

“We thought it was a fire drill at first but really, the teacher said, ‘Start running,'” the student told KTRK.

The governor provided a few details about the suspect, who several media outlets have identified as 17-year-old Dimitrios Pagourtzis.

Abbott said police found information in journals and a cellphone belonging to the suspect that said he wanted to carry out the shooting and kill himself after the incident. The governor said the suspect presented himself to responding officers and didn’t take his own life.

The governor also said there are at least two other people of interest being interviewed by authorities for more information about the shooting.

Earlier in the day, Gonzalez said on Twitter that one person is in custody and that a “person of interest” was detained. He confirmed that information later this morning, adding that it’s not immediately clear if there are multiple suspects. At this time, both are believed to be students at the school.

One is in custody, a second one detained. An injured police officer is being treated, the extent of his injuries are unknown.

What the president said

President Donald Trump, who hosted a prison reform summit at the White House this morning, tweeted his initial response to the shooting.

At the top of his remarks at the summit today, the president said his administration will do everything “in our power to protect our students, secure our schools and to keep weapons out of the hands of those who pose a threat to themselves and to others.”

Watch President Donald Trump’s remarks at the summit, which started with a response to Friday’s shooting.

“We grieve for the terrible loss of life, and send our support and love to everyone affected by this absolutely horrific attack. To the students, families, teachers and personnel at Santa Fe High School: We’re with you in this tragic hour, and we will be with you forever,” Trump said.

First lady Melania Trump tweeted, “My heart goes out to Santa Fe and all of Texas today.”

My heart goes out to Santa Fe and all of Texas today.

Abbott arrived at the scene Friday to brief reporters on the latest updates from the shooting aftermath. Abbott said he’ll help organize roundtables in different parts of the state over how to prevent future shootings.

Republican Sen. Ted Cruz joined the governor at the briefing.

“Any and all federal assets and resources that are needed will be provided, and Texas will come together in the wake of this horror,” Cruz said in a statement. “Texas is renowned for its strength and resilience in the face of adversity, and our communities will always care for the afflicted and bring justice to those who do us harm. Today we work swiftly to accomplish both,” he added.

Betsy Price tweeted that she was in Houston for a meeting with other Texas mayors, adding, “Our hearts and minds are all on Santa Fe H.S., and we are praying for all involved.”

I'm in Houston this morning for a meeting with Texas' big city mayors. Our hearts and minds are all on Santa Fe H.S., and we are praying for all involved.

Friday’s shooting is the deadliest school shooting since a gunman killed 17 people at Marjory Stoneman Douglas High in Parkland, Florida. The shooting prompted several of the surviving teens to push for gun control reforms. In November, a gunman also killed 26 people and wounded 20 others at a church in Sutherland Springs, Texas.

Texas authorities and hospital officials plan on having additional updates throughout the day. PBS NewsHour will update this story as it develops.