After medical legalization, what are the costs of getting high?

Marijuana use is illegal under federal law. Despite this, an estimated 18 million people were current marijuana users in 2011. As of June 2014, 23 U.S. states had legalized the use of marijuana for medical purposes in response to growing awareness that the active ingredient in the drug may be useful as an analgesic for chronic pain, an antiemetic, and an antispasmodic. Two states, Washington and Colorado, had legalized recreational use as well.

In “The Effect of Medical Marijuana Laws on Marijuana, Alcohol, and Hard Drug Use” (NBER Working Paper No. 20085), Hefei Wen Jason M. Hockenberry, and Janet R. Cummings use individual survey data from seven states to examine the effect of legalizing medical marijuana.

What’re they smoking in the next high-finance industry?

They find that legalization increased both marijuana use and marijuana abuse/dependence in people 21 or older. It was also associated with an increase in adult binge drinking, defined as the number of days on which an individual had five or more drinks on the same occasion in the last month. People 12 to 20 years old were 5 to 6 percent more likely to try marijuana for the first time when medical use was legalized.

Legalization was not associated with an increase in adolescent drinking, or with increased cocaine or heroin use in either group.

So you want a job? You’d better be in the right neighborhood

The data are drawn from the 2004 to 2011 National Survey on Drug Use and Health. The survey data include self-reported information on respondent drug use, the frequency of use, and questions designed to assess drug abuse or dependence with respect to criteria in the Diagnostic and Statistical Manual of Mental Disorders, 4th edition. The authors controlled for age, gender, race/ethnicity, cigarette smoking, urban residence, family income, marital status, educational attainment, college enrollment, and employment status. They also controlled for state beer taxes, unemployment rates, average personal income and median household income. 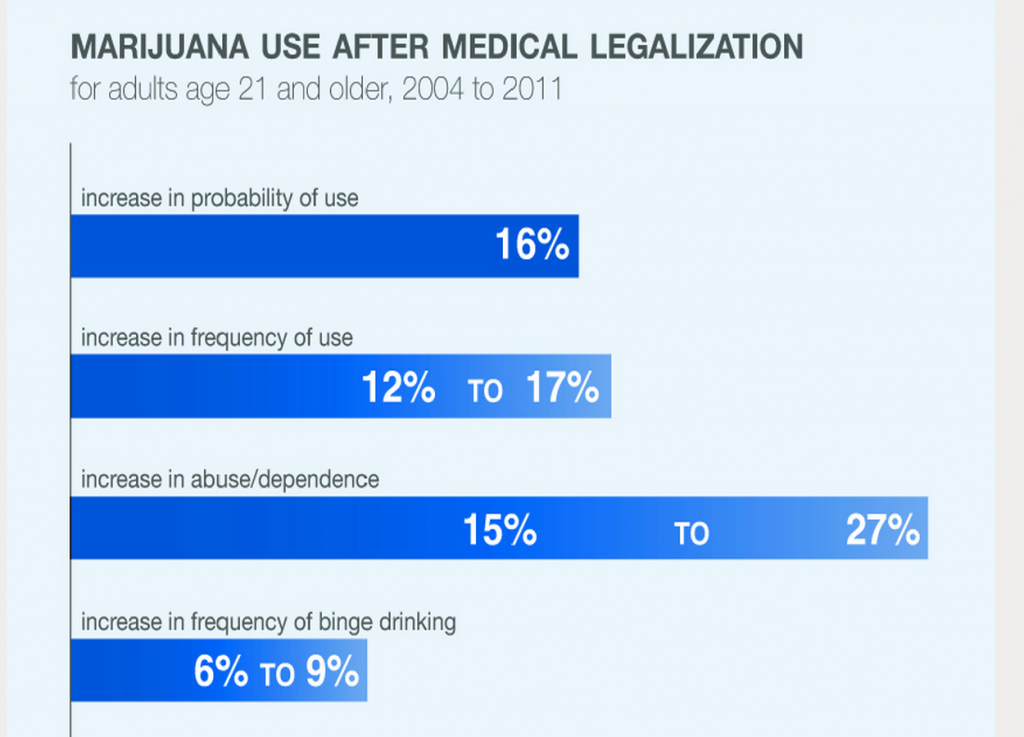 Graph courtesy of NBER. Click on image to go to full digest.

When will your prescriptions be cheaper?

For adults, the baseline predicted probability of an individual having used marijuana in the last month was 8.6 percent. Legalization increased it by 1.37 to 1.40, an increase of 16 percent. The number of marijuana use days per month rose by 0.14 to 0.21 days a month, or 12 to 17 percent. Legalization increased the probability of adolescent initiation of marijuana use in the last year by 0.32 to 0.46 percent, a 5 to 6 percent increase. While this suggests that more adolescents experimented with marijuana, the data do not suggest that regular use increased in this group.

The authors note that the 6 to 9 percent increase in frequency of adult binge drinking, along with an estimated increase in the probability of simultaneous use of marijuana and alcohol of 15 to 22 percent, suggests that legalization could result in “considerable economic and social costs from downstream health care expenditures and productivity loss.”