ORLANDO, Fla. — He had gotten the puppy as a birthday present. Now, “Black,” whom Clio Wigfall had named for his color, was four months old, and so friendly he jumped up on everybody to lick their faces. He had also taken up a habit of sleeping in Wigfall’s bed.

Wigfall sometimes worried about Black in his small mobile home in a trailer park in central Orlando. He worried about whether the dog was getting enough exercise, because Wigfall had to work long hours at two jobs. He’d started taking the dog to nearby Lake Eola to go swimming on weekends, which Black loved. But on Sunday, Wigfall planned to leave Black behind.

The night before, the government of Orange County, which Orlando is in, issued a mandatory evacuation order for all mobile home residents, which were at greater risk from Hurricane Irma than sturdier homes. Though it looked like the city would be spared from the very worst of the storm, it was still expected to receive destructive winds, heavy rain and flash flooding, and was also now at risk of tornadoes from the storm’s outer band.

Wigfall hadn’t planned to leave, but then his aunt had called and offered him shelter in a local church. He was told he couldn’t bring Black along, so he made the decision to go without him. “I’ll leave him lots of food and water,” he said, as Black licked his face. “If it floods, he’ll get up on the couch. I know he does that already because of the paw prints there.”

Wigfall would evacuate the Palms Trailer Park, but on Sunday morning, just hours before Hurricane Irma was due to hit Orlando, a park security guard said a quarter of the residents in the approximately 100 units were still there. They were staying for their pets, for their homes, and for their things — afraid that in a community known for its crime, people might come during the storm and take all they had. They were staying because leaving meant making too many hard choices about what to leave behind.

For the last two days, the security guard had told them they were being hard-headed, and that this was not like other hurricanes. Officials from Orange County Fire Rescue had also come multiple times and gone door-to-door, urging people to please leave. But the remaining Palms residents found these efforts silly. Most of them didn’t have the money to go elsewhere. Even if they did, efforts to leave were frustrated by things like a broken phone or a lack of a car. The nearest pet-friendly shelter, at a high school, was five miles away. They weren’t going to get their bags and start walking along the highway in the rain.

Orlando’s 311 said it was offering transport service until noon on Sunday to residents who called in. (PBS NewsHour also offered residents rides.)

Orange County, Florida, issued a mandatory evacuation for mobile homes a day before Hurricane Irma was expected to make landfall at the southern tip of the state. Sunday morning, a fire rescue vehicle drove through the park, issuing another emergency notice through a bullhorn. Video by Joshua Barajas/PBS NewsHour

Late Sunday morning, Orange County Fire Rescue officials came back again, this time driving through the park with a bullhorn that blared: “Evacuate now! Dial 311 for emergency shelter locations. During the storm, we will not be able to help you.”

Desiree Smith and her mother Susan Guertin, who sat in their mobile home smoking cigarettes and watching hurricane warnings on the local news, only laughed at these warnings.

“When [Hurricane] Matthew came through this trailer, it didn’t even shiver,” Guertin said. And she found it ridiculous that officials would demand people leave without offering an obvious way out. Guertin pointed to a nearby trailer, where a woman, who she said could not walk, lived with what several described as dozens of cats. “That lady is not able to walk. Is anybody helping her? No.” She paused. “But I guess she also would not leave her babies.”

Guertin was the same way. She wanted to stay for her Jack Russell terrier, whom she’d rescued and named Pooh Bear, and who was now scratching his back against a table. She’d heard rumors that at shelters they made people lock animals in their crates for days. And she wanted to stay to protect her home, which was full of things she loved — things that had taken her a lifetime to find. “It took me years to gather up those real Native American arrows,” she said, pointing to arrows that hung in a fur pouch on the wall. (She and her daughter are descendents of the Micmac tribe, which is indigenous to Canada.) “They may not mean [much] to others but they mean something to me,” she said. 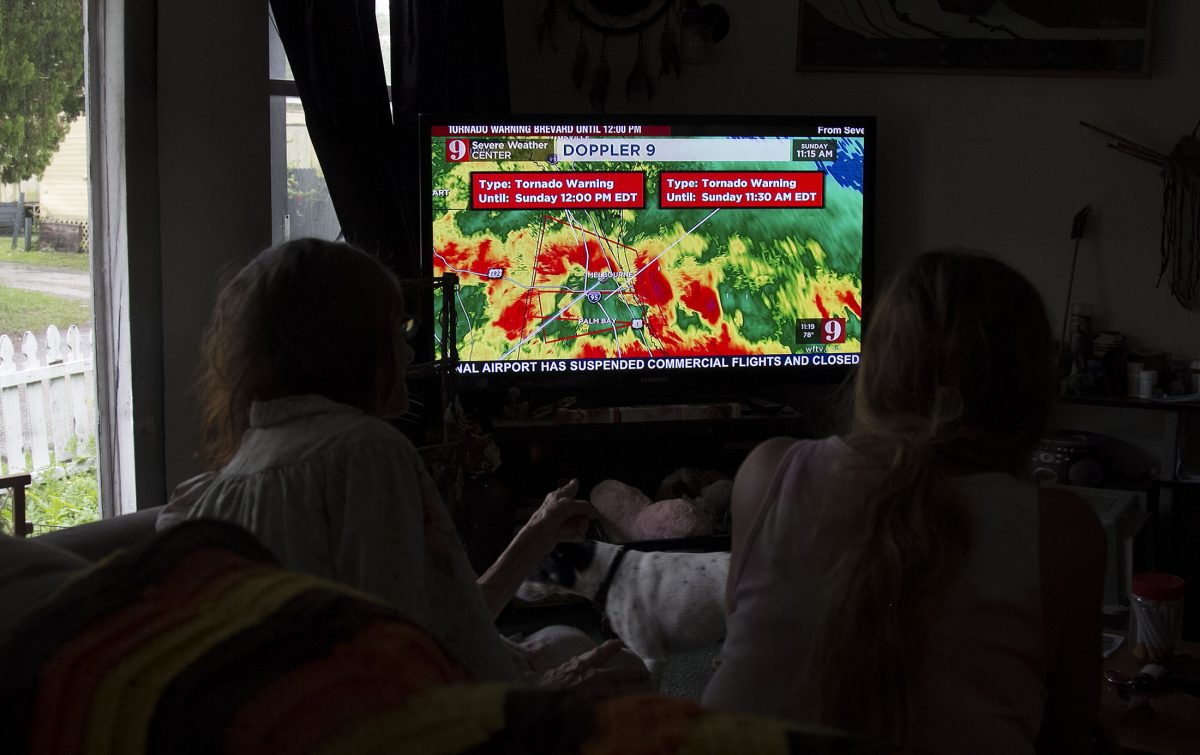 Smith, who had moved into the mobile home after her mother had a heart scare several years before, said that if her mother wanted to stay put, she wouldn’t question it. Since moving in, Smith had planted cantaloupes, papaya, pineapple, tomatoes and watermelon in their front yard. She’d made it feel like home. “People said we couldn’t grow anything here,” she said. “But just because we live in one of the worst neighborhoods in Orlando doesn’t mean we have to live bad.”

But Smith also had a plan if tornadoes did rip through the park. She’d bust open the lock to the trailer park’s laundromat, which was made of cinder block, and take shelter with her mother and as many people she could fit inside. 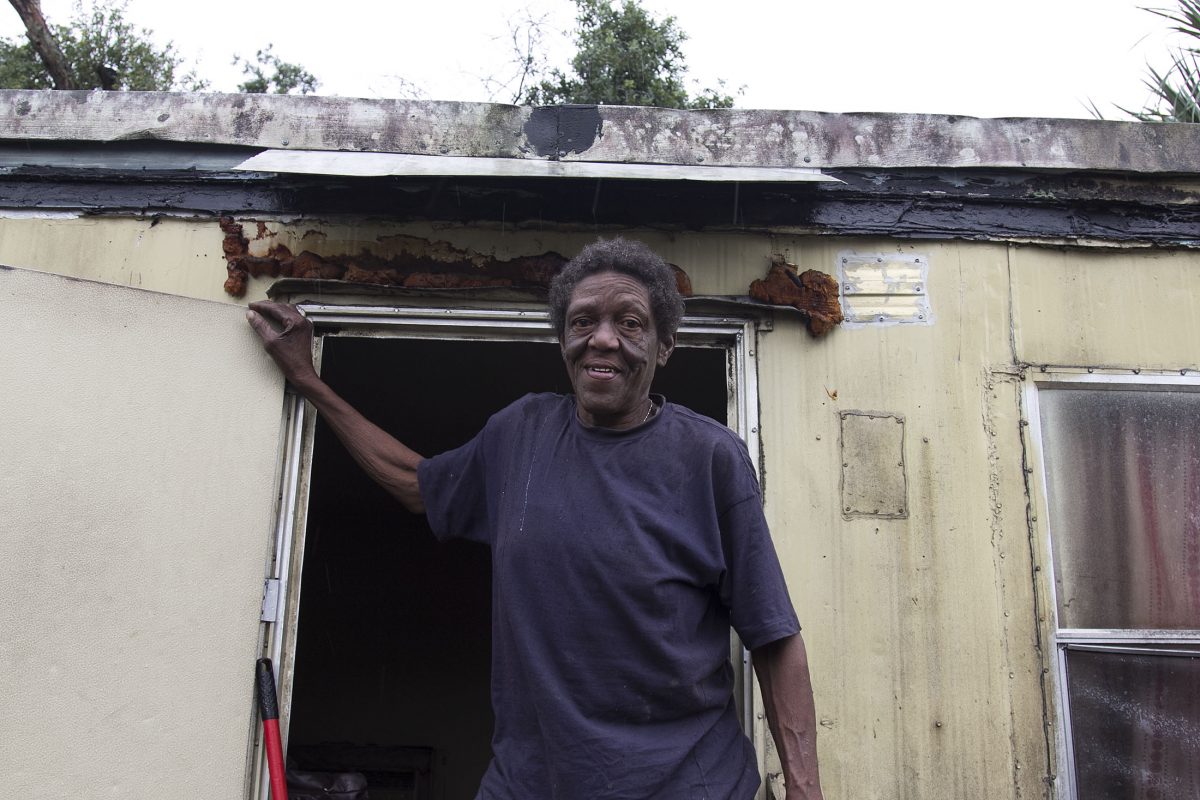 Kenneth Levi plans to stay in the mobile home park when the storm intensifies in the area. Levi originally had planned to evacuate the park, but his niece never came by to pick him up. In the end, he also didn’t want to leave his two dogs behind. Photo by Joshua Barajas/PBS NewsHour

In a nearby trailer, Kenneth Levi had also made a plan, but it hadn’t worked out. His niece was supposed to come get him, but had never shown up. Now, his packed suitcase sat by the door, his gym shoes resting on top. But Levi said that was okay. He had made his peace with staying. He sat smoking with his neighbor and good friend, Kelo Kidd, whom he called “Dallas,” and made jokes how the storm was the whole size of Florida, so where were they supposed to go anyway?

Plus, Levi had bought canned goods and lots of water. During the storm, he’d bring his dogs inside. They slept with him at night anyway. He hadn’t considered going to a shelter, even a pet-friendly one, because his two dogs didn’t get along well with people. “I’m not gonna leave them here,” he said. “If I go, I take them with me.”

That night, when the storm hits, he and Kidd might stay together, instead of in their separate trailers. They weren’t sure yet. But Kidd was certain of one thing.

“If it gets bad and he can’t make it, I’m gonna throw his ass over my shoulder,” he said.

Levi laughed, and took a drag of his Black and Mild cigarette. He looked at his records, which he loved, and at Kidd, a friendship that stretched back a long time. He opened up his phone. On the screen was a picture of himself at prom, decked out in a tuxedo, and beside him a girl in a white dress. 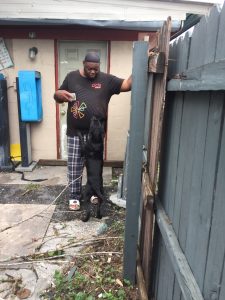 Update: After the storm, the PBS NewsHour returned to the Palms Trailer Park to check on its residents.

Clio Wigfall ended up staying behind for Black. He said he slept the whole night in his closet with his dog. “He was in there and I told him to scoot over,” he said.

Desiree Smith and Susan Guertin also stayed, adding a sign to their window indicating who was inside: “2 adult women, 1 dog, 1 cat.” Though their fence was knocked down and their trailer lost some of its aluminum siding, Smith said: “But look, our papaya plant made it.”

Kenneth Levi said he had “a great night’s sleep” with his dogs. He sat Monday morning drinking beer and making jokes with other residents of the Palms, who had already worked to clean up much of the debris from the storm.

This is part of a series of stories reported from Florida during Hurricane Irma. Read more below:

Above: A difficult choice: — Clio Wigfall, a resident of the Palms Trailer Park in central Florida, pets his puppy “Black.” While Wigfall plans to evacuate his home to a local church, he was told that pets weren’t allowed inside. He will leave Black inside his mobile home for the duration of the storm. Photo by Joshua Barajas/PBS NewsHour