All of the ways Scott Pruitt changed energy policy

EPA Administrator Scott Pruitt resigned Thursday, ending a tumultuous reign at the agency that was marred by numerous ethics scandals over his spending, travel habits and other conduct in office.

Pruitt’s behavior led to 13 federal investigations, a cloud that hung over his leadership of the Environmental Protection Agency. Pruitt referred to the controversies indirectly in his resignation letter to President Donald Trump, framing them as an “attack” on him and his family.

“The unrelenting attacks on me personally, my family, are unprecedented and have taken a sizable toll on all of us,” Pruitt wrote.

Trump, who for months ignored pressure to fire Pruitt over the investigations, praised the former Oklahoma attorney general in a statement on Twitter accepting his resignation. “Within the Agency Scott has done an outstanding job, and I will always be thankful to him for this.”

The spotlight on Pruitt’s ethics issues in recent months largely overshadowed the sizeable impact he’s had on U.S. energy and environmental policy.

Pruitt backed Trump’s decision to withdraw from the Paris climate accord, and rolled back or targeted a number of other important energy and environmental regulations. He also pushed for a smaller EPA budget — a victory for conservatives who argued throughout Barack Obama’s presidency that the agency was bloated and needed to be significantly downsized.

Now that Pruitt is out, the debate over his legacy begins in earnest. Here’s a look at his track record on the Paris accord, Clean Power Plan, and other energy and environmental issues.

Pruitt played a key role in Trump’s decision to withdraw from the Paris Climate Agreement. Alongside former Trump strategist Steve Bannon, Pruitt ensured the president heard from lawmakers who believed the deal negatively affects the U.S. economy and stifles the production of fossil fuel energy. Both Ivanka Trump, the president’s daughter, and former Secretary of State Rex Tillerson tried to persuade Trump to stay in the agreement, even bringing former vice president Al Gore to Trump Tower in Manhattan, but in the end, Pruitt and Bannon’s arguments were more convincing. 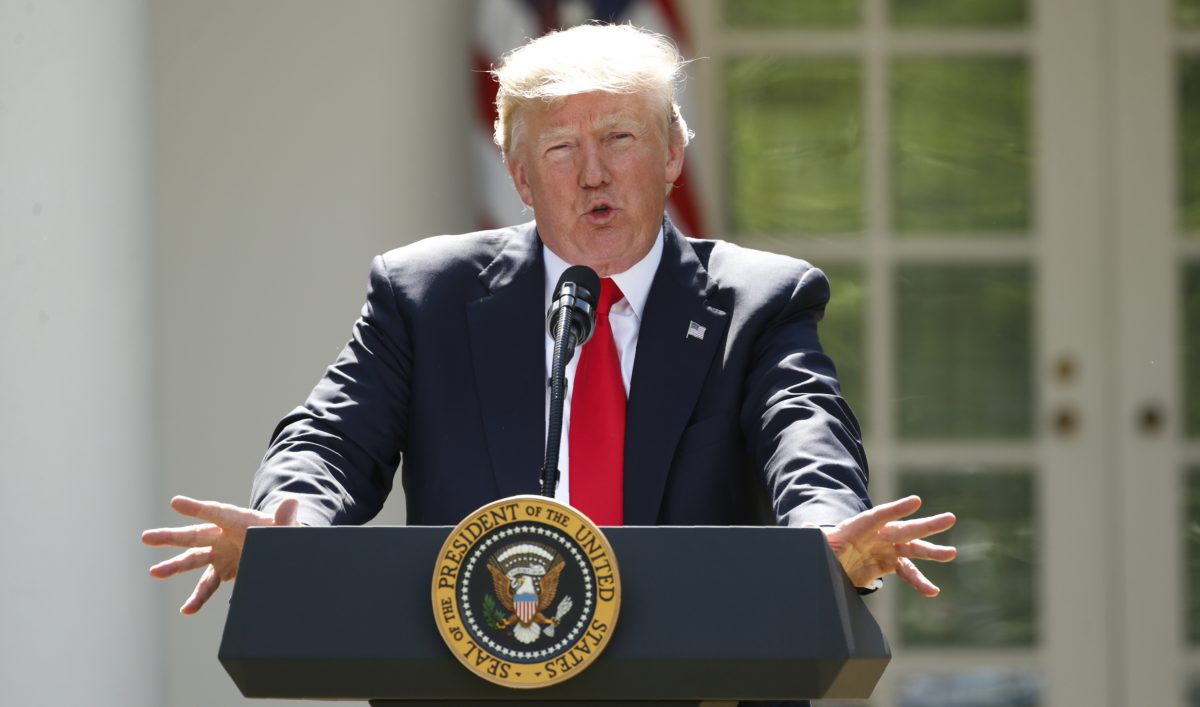 President Donald Trump announces his decision that the United States will withdraw from the Paris Climate Agreement, in the Rose Garden of the White House in Washington, U.S., June 1, 2017. Photo by Kevin Lamarque/Reuters

The Paris deal set an overall goal of limiting the average global temperature rise to less than 2 degrees Celsius. To help that happen, developed countries are required to contribute $100 billion a year to help developing countries adapt to climate change and transition to greener sources of energy.

The earliest effective date the U.S. could withdraw from the agreement is November 2020.

Pruitt, a noted climate change skeptic, has said he does not believe carbon dioxide pollution from burning fossil fuels is a major cause of climate change.

Pruitt opposed the Clean Power Plan — a centerpiece of Obama’s climate change legacy — since before he took over as EPA chief. Four of the 14 legal challenges Pruitt filed against the EPA as Oklahoma attorney general dealt with the Clean Power Plan.

Developed in 2015 under the decades old Clean Air Act, the plan set state-specific regulations to limit the amount of carbon pollution that new or existing power plants can produce. It also encouraged states to move to greener sources of energy. Coal- and natural-gas-fired power plants are responsible for roughly a third of U.S. carbon dioxide emissions. The Clean Power Plan is expected to cut power sector emissions by 32 percent relative to 2005 levels by 2030.

Pruitt had a significant impact on U.S. energy and environmental policy during his tenure as EPA chief.

Fossil fuel producers, industry groups and attorneys general from conservative states have argued for years that the plan was an example of federal overreach by the Obama-era EPA.

Under Obama, the EPA was “more costly and less efficient,” said Monseu of the American Coal Council. “We support the regulatory reforms that this administration is taking all around,” she added.

Pruitt signed a formal proposal to repeal the Clean Power Plan last October, following an executive order from Trump requesting an EPA review. Pruitt has stated that the plan places unnecessary regulations on the U.S. energy sector and slows domestic energy development. The repeal of certain regulations under the plan, such as carbon pollution guidelines for existing stationary sources, is currently going through an open public comment period.

More recently, Pruitt announced that the EPA would review fuel emissions standards for cars and light duty trucks that are slated to take effect between 2022 and 2025. The new standards, which were put in place under Obama, passenger cars would be required to get an average of 54.5 miles-per-gallon by 2025.

Pruitt, who made the announcement at an event with auto industry executives, said the Obama-era standards were too high and unrealistic, and were made with “politically charged expediency.” 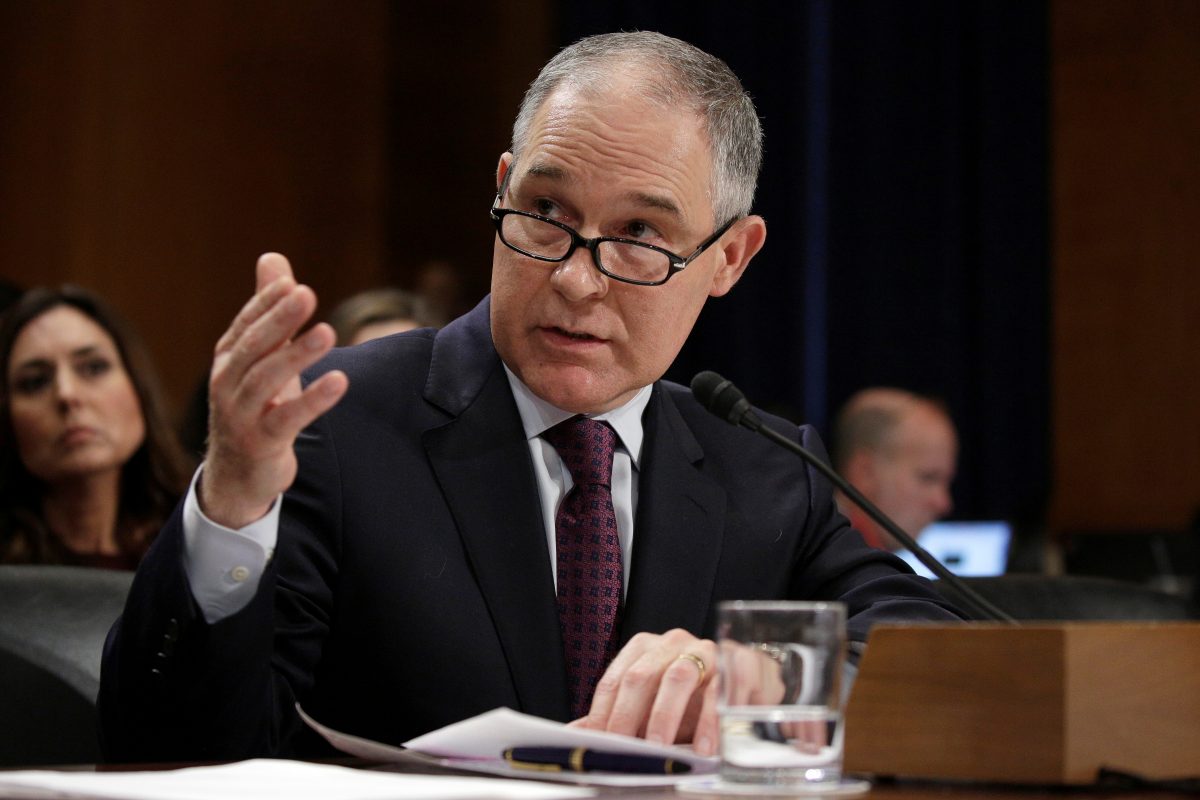 Then-Oklahoma Attorney General Scott Pruitt seen testifying at a Senate Environment and Public Works Committee confirmation hearing on his nomination to be administrator of the Environmental Protection Agency in Washington, on January 18, 2017. Photo by REUTERS/Joshua Roberts

Even though the EPA sets federal fuel emission standards, state and local governments can apply for waivers for stricter regulations. New York, Massachusetts, Oregon and Maryland, for example, have adopted stricter standards set by California, which is often out in front of the federal government on energy and environmental regulations.

Automakers pushed Pruitt to draft new emissions standards. But in order to do so the EPA would have to go through a formal and time-consuming rulemaking process, potentially opening the agency to lawsuits from environmental groups and states opposed to the new standards.

Pruitt also pushed for additional deregulations that haven’t made as many headlines.

Shrinking EPA’s footprint: Since Pruitt took over, the EPA approved at least 24 regulatory rollbacks so far, according to a tracker run by Harvard’s Environmental and Energy Law program. Under Pruitt’s watch, the EPA received a $2.6 billion, or 30 percent, cut to its 2017 enacted budget, bringing it to $5.65 billion for the 2018 fiscal year, the lowest EPA budget since 1990.

Methane: Last June, Pruitt ordered a delay of a new regulation on methane leaks for two years. However, a month later, judges vacated the delay and found Pruitt’s order in violation of the Clean Air Act. 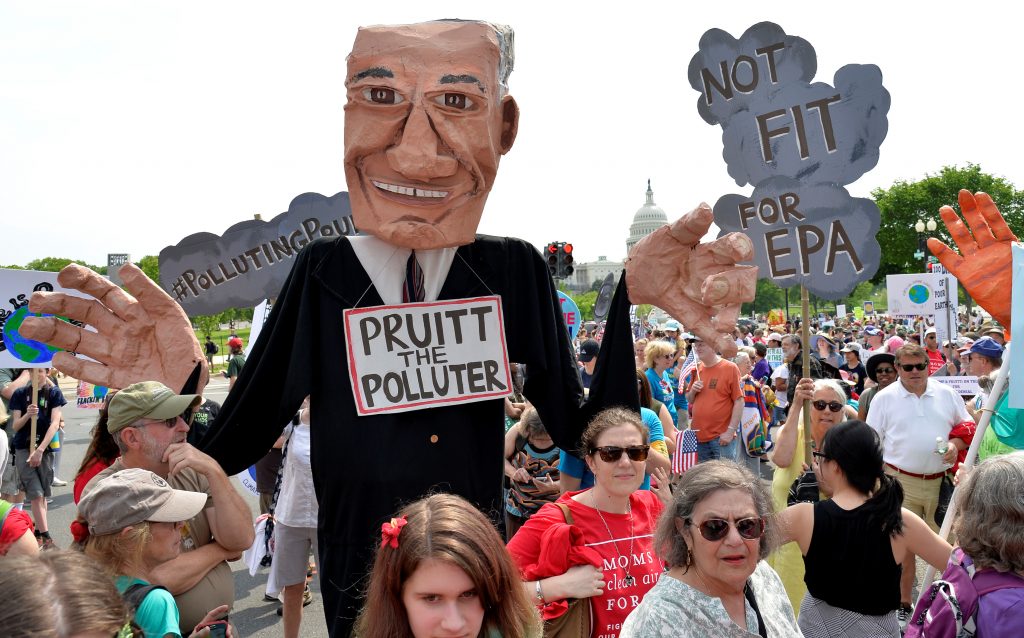 A giant puppet depicting Pruitt is carried among demonstrators during a People’s Climate March in Washington, U.S., April 29, 2017. File photo by REUTERS/Mike Theiler

Pesticides: Pruitt last year denied a petition from the Natural Resources Defense Council and the Pesticide Action Network North America calling for a ban of the pesticide chlorpyrifos. The decision came despite a finding by EPA scientists that there is no safe level of exposure to the substance.

Pruitt’s policies will be judged against the backdrop of the controversies surrounding his conduct as EPA chief. Here is a recap of some of the ethics scandals surrounding Pruitt.

Flights: Pruitt reportedly spent more than $105,000 on first-class flights during his first year as EPA chief, and got approval ford charter flights after he took them.

Sound Proofing: He spent a total of $43,000 on a soundproof booth and renovations required to outfit a nearby storage closet in his office — despite the fact that the EPA already had a Sensitive Compartmented Information Facility, or soundproof booth, on a separate floor. While building a personal soundproof booth is not illegal, the spending of more than $5,000 in federal funds on furnishings or improvements to the office of a presidential appointee without first notifying members of the appropriations committee of both the Senate and House does violate the General Government Appropriations Act, according to the Government Accountability Office.

Management: At least five EPA officials were reassigned under Pruitt after questioning his spending and management of the EPA. One of them, Kevin Chmielewski, was appointed by Trump and placed on administrative leave without pay.

Condo: Most recently, Pruitt came under fire for leasing a bedroom in a condo owned by the wife of an energy lobbyist regulated by the EPA. He paid a reported $50 a night for the room and only paid for it on the nights he slept there. In total, Pruitt paid $6,100 for the room, equaling roughly $1,000 a month.

Job hunt: Pruitt reportedly asked some of his aides to help find his wife a high-paying fundraising job with the Republican Attorneys General Association.

This story has been updated with the news of Pruitt’s resignation.

Left: EPA chief Scott Pruitt, who announced Thursday that he was resigning, had a lasting impact on U.S. energy and environmental policy. File photo by Joshua Roberts/Reuters