Nuclear weapons. Ethnic conflict. Global warming. Americans have a lot to be worried about these days. But what do they see as the biggest threat to the world? Inequality.

Americans aren’t alone. According to a recent Pew Research Center survey, Europeans, too, rank inequality as the top threat. People in the Middle East, meanwhile, are most concerned about religious and ethnic hatreds, while Asians worry about pollution and the environment. For Latin Americans, nuclear weapons pose the greatest global threat, and for people in African nations, it’s AIDS and other diseases. Note that the survey was conducted between March 17 and June 5 — before either ISIS or Ebola had become big international stories.

Pew’s Global Attitudes Project surveyed 48,643 respondents in 44 countries about which of those five major threats is the most dangerous to the world. They found strong country and regional differences, but within specific countries and regions, there sometimes wasn’t an overwhelming consensus about which threat is most severe.

In Asia, for example, pollution and nukes are nearly tied. The same is true in Latin America. The French see both inequality and religious and ethnic hatreds as most pressing, while an equal percentage of Mexicans fear nuclear weapons as fear pollution. (In some countries, the margin of error was as high as plus or minus 4.5 percentage points.) 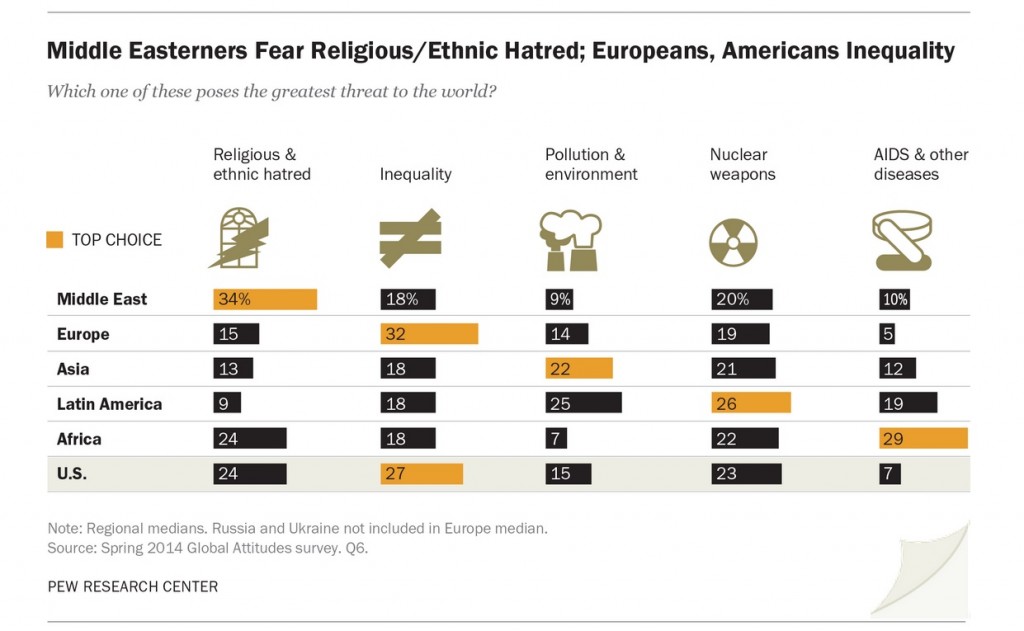 For the United States, religious and ethnic hatred comes in a close second, after inequality, but only 7 percent think AIDS and other diseases pose the greatest danger.

U.S. concerns have shifted over the years based on what’s most immediate on American minds. The first time Pew administered the survey, in 2002, shortly after the 9/11 attacks, one-third of Americans ranked nuclear proliferation the biggest threat to the world. By 2007, after the U.S. had been involved military in Afghanistan and Iraq, religious and ethnic hatred rose to the top. The percentage of Americans identifying inequality as the biggest concern has increased from 17 percent in 2007 to 27 percent today.

Six years after the great recession, it’s no secret that Americans are preoccupied with the economy. Survey after survey shows it’s the issue most on voters’ minds as they head to the polls next month. And as we saw Wednesday, international economic instability can quickly roil markets. What’s noteworthy about this survey, though, is that it specifically asks about inequality, defined as the growing gap between the rich and the poor, rather than simply “the economy.”

Inequality, if we’re to believe Thomas Piketty, is a more intractable issue than, say, a volatile stock market, and as we’ve reported widely, one with a range of side effects for both the health of the American dream (specifically national mobility rates) and the actual physical health of individuals. Inequality’s also a concern with more political undertones than a blanket topic like “the economy.”

Indeed, there’s a partisan split in America over the biggest global threat. The greatest danger to the world among Democrats, and to a lesser extent, Independents, is inequality, followed by nuclear weapons for Democrats and ethnic and religious hatred for Indies. Republicans are much more concerned about religious and ethnic hatred.

And even though Americans as a whole think inequality poses the greatest danger, they continually underestimate just how severe the wealth gap between the rich and poor is — at least in this country, as Paul Solman found out several years ago when he administered a quiz to people lined up for tickets to the “Late Show” in New York’s Time Square. He showed them pie charts reflecting different distributions of wealth, and asked them to identify which chart represented the U.S. Watch the responses he received below:

Data available after 2011, when Paul administered the quiz designed by Duke psychologist and behavioral economist Dan Ariely, shows that wealth inequality is increasing the fastest at the tippy top of the American wealth distribution. In 2012, the top .01 percent had a 11.2 percent share of the wealth, “as much as in 1916 and more than in 1929,” according to economists Gabriel Zucman and Emmanuel Saez. A report from Credit Suisse out this week, which shows that worldwide, the richest 1 percent of people owns nearly half of global wealth, cautions that inequality like that could portend a recession.

Other developed economies besides the United States, like South Korea, worry about inequality too. Fears are particularly elevated in countries affected by the euro crisis. Fifty-four percent of Spaniards (the highest of all 44 nations surveyed) and 43 percent of Greeks rank inequality their biggest concern. Percentages are slightly lower in other European countries like Germany, Italy, Poland and France, even though it’s still the dominant concern. The United Kingdom, by contrast, is much more worried about ethnic and religious hatreds.

Lebanon has the highest percentage of people concerned about religious and ethnic hatreds. Looking at what Pew calls a “global median percent” of 28 countries, that’s also the issue that’s seen the highest jump since 2007, with worldwide fears rising from 17 to 24 percent, driven, in part, by spikes in the percentages of Lebanese and Egyptians ranking it most dangerous.

Naturally, fears of nuclear weapons are highest in Japan, the only nation to have suffered a nuclear attack, and the site of the more recent Fukushima nuclear disaster. Fears about AIDS and other diseases are highest in Uganda, where over 7 percent of the adult population lived with HIV in 2012. Thailand and Colombia are the two countries most concerned about pollution and the environment.

Left: Americans think the gap between rich and poor is the biggest global threat, according to a recent Pew survey. Photo by Flickr user Isc21.