Americans who live near border say Trump’s wall is unwelcome

LOS EBANOS, Texas — All along the winding Rio Grande, the people who live in this bustling, fertile region where the U.S. border meets the Gulf of Mexico never quite understood how Donald Trump’s great wall could ever be much more than campaign rhetoric.

Erecting a concrete barrier across the entire 1,954-mile frontier with Mexico, they know, collides head-on with multiple realities: the geology of the river valley, fierce local resistance and the immense cost.

If a 30- to 40-foot concrete wall is a panacea for illegal immigration, as Trump insisted during the campaign, the locals are not convinced. And few were surprised when the president-elect seemed to soften his position five days after the election, saying that the wall could include some fencing.

“The wall is not going to stop anyone,” said Jorge Garcia, who expected to lose access to most of his 30-acre riverside ranch after the U.S. Border Fence Act was enacted a decade ago.

Under the law, 652 miles of border barrier were built, mostly in Arizona. The 110 miles of fences and fortified levees that went up in Texas are not contiguous but broken lines, some as much as a mile and a half from the river.

Eight years after government surveyors marked Garcia’s land, he and his wife, Aleida, are still waiting to see if the Border Patrol will sever their property.

“This lets me know that whenever they want to build the wall, they can,” said Aleida, holding up a tax bill that shows the nominally expropriated sliver of property.

If a fence or wall goes up, the couple will be paid $8,300. So far, the Garcias and the rest of the village of Los Ebanos have been spared because the erosion-prone clay soil is simply too unstable, she believes. 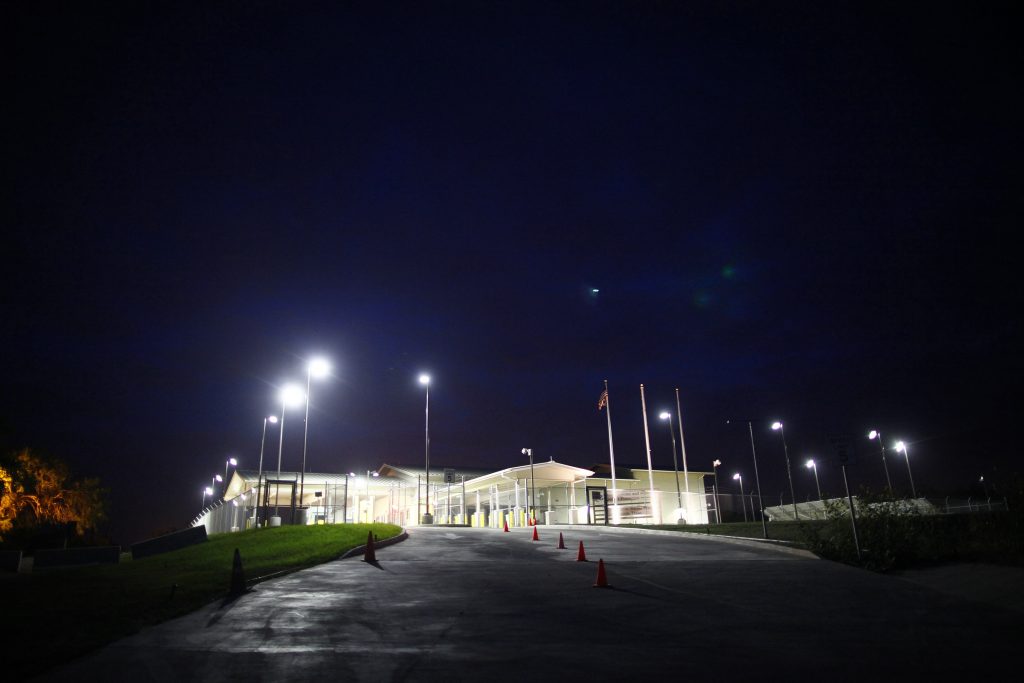 Geology conspires against wall-building up and down the Rio Grande Valley. So does a boundary water treaty with Mexico and endangered-species laws. Catwalks and tunnels had to be built into existing fences to accommodate endangered ocelots and jaguarundi, two species of wild cat.

The gaps in the border barrier include an entire flank of the River Bend golf club and resort in Brownsville. University of Texas-Rio Grande Valley political scientist Terence Garrett calls them “gaps of privilege” because many landowners were politically connected.

Other landowners fought the Border Patrol in court.

“The wall might make mid-America feel safer, but for those of us that live on the border, it’s not making us feel any safer when we know that people can go over it, around it, under it and through it,” said Monica Weisberg-Stewart, security expert for the Texas Border Coalition, a consortium of regional leaders.

The coalition wants federal dollars to go instead to bolstering security at border crossings, where heroin, cocaine and methamphetamine are smuggled in. A poll conducted in Southwest border cities in May found 72 percent of residents opposed to building a wall. The Cronkite News-Univision-Dallas Morning News poll had a margin of error of 2.6 percentage points.

The wall is popular in distant cities “because you can see, feel and touch it. But politically it just doesn’t make sense,” said J.D. Salinas, the coalition’s chairman.

As commissioner of the border county of Hidalgo from 2007 to 2009, Salinas won public backing for 20 miles of border barrier by reinforcing an existing levee with concrete and topping it with a fence. In 2010, the project paid off. The levee held back flooding from Hurricane Alex. The cost was about $10 million a mile, though.

Then-Republican presidential candidate Donald Trump holds a sign supporting his plan to build a wall between the United States and Mexico that he borrowed from a member of the audience at his campaign rally in Fayetteville, North Carolina. Photo by Jonathan Drake/Reuters

In the Nov. 8 election, only three Texas border counties — all sparsely populated — went for Trump. The rest are solidly Democratic, at odds with the Republicans who control most state capitals and have been demanding more border barriers.

Rural ranchers worried about drug traffickers and other criminals are less likely to benefit from border walls and fences than city-dwellers, said Adam Isacson, a security expert with the nonprofit advocacy group Washington Office on Latin America.

“What a wall ultimately does is slow a border crosser for 10 to 15 minutes,” Isacson said. “In an urban area, that 15 minutes is crucial.” Border patrol agents can arrive quickly. In rural areas, they may be an hour or more away.

The U.S. side of the border is quite safe, said Weisberg-Stewart. “We are not in a war zone.”

In fact, cross-border trade has been booming. In 2014, more than $246 billion worth of goods and 3.7 million trucks crossed the Texas-Mexico border, according to coalition figures.

Trump needs to remember that Mexico is the second-largest U.S. export market, said Rep. Filemon Vela, a Texas Democrat whose district includes most of the valley. Only Canada buys more American goods.

Much of the Mexican side of the border has been afflicted by drug cartel-related violence, but crime in the Rio Grande Valley, which is home to 1.3 million people, has been consistently lower than other Texas cities.

If lots of “bad hombres” are crossing the border, as Trump has claimed, they are mostly taking their lawbreaking elsewhere. Further, there’s no record of anyone sneaking across the border to commit acts of terrorism.

The Border Patrol’s buildup after 9/11 is one reason, argues David Aguilar, who was named to the agency’s top job in 2004 by a fellow Texan, then-President George W. Bush, and is now a private consultant. Since then, the number of agents has climbed from 9,500 on the southwest border to 17,500 in 2015.

Meanwhile, the number of apprehensions along the border is down from a peak of 1.6 million in 2000 — when Aguilar said at least as many got away — to 409,000 in the year ended in September. Nearly half were caught in the Rio Grande Valley.

Many analysts believe the Great Recession was a bigger factor than Border Patrol enforcement in making the U.S. less attractive to Mexican migrants in particular.

Since tower-mounted video surveillance cameras began going up in 1999 in the Brownsville area, illegal cross-border traffic in the area “dried up by 85 to 90 percent,” said Johnny Meadors, the sector’s assistant chief for technology. He said the traffic moved west, where there were no cameras.

Seventy-two more of the towers, which are 80 to 120 feet tall, are to be installed in the valley by 2021, and could include motion sensors and laser pointers, Meadors said.

Since 2013, the Border Patrol has also had five blimp-like aerostats that float from 1,000 to 5,000 feet above the valley on tethers. High-flying Predator drones have patrolled vast areas of southwest borderlands since 2011. The agency also has underground sensors along the border. How many, Meadors wouldn’t say.

All the gadgetry has been a bonanza for defense contractors. The government spent $450 million last fiscal year on border security fencing, infrastructure and technology.

“If you had a sensible immigration policy, there would be no need for all this,” said Garrett, the political scientist.

During the campaign, he said he would deport all the estimated 11 million immigrants living illegally in the United States. Days after the election, he appeared to back down somewhat, saying he would expel the criminals among them.

Whether fear of a Trump victory has anything to do with a recent spike in arrivals from violence-wracked Central America isn’t clear. They account for more than half of Border Patrol apprehensions in the Rio Grande Valley, where many migrants turn themselves in at frontier bridges.

After processing, released migrants are given court dates in destination cities where relatives typically await. Others are sent to detention centers.

An average of 350 migrants, some adults wearing ankle monitors, now arrive daily at the Sacred Heart parish community center in the border city of McAllen, up from 100 a day in August, said Gaby Lopez, a volunteer at the makeshift shelter that opened in June 2014.

New arrivals get a shower, a hot meal and can pick through donated clothing.

Ingrid Guerra, 21, a Guatemalan who is eight months’ pregnant and bound for Kansas, said she was fleeing an abusive relationship and didn’t tell the father. The father of her other child, a 2-year-old who stayed behind with Guerra’s mother, was killed in a drunken brawl, she said.

Sitting with her is Erika Machuca, a 19-year-old Salvadoran.

Machuca, also eight months’ pregnant, is bound for Dallas, where her husband lives. She says two of her brothers and three uncles were killed in El Salvador in violence she did not understand.

Both women said they merely want to earn a living and raise families in peace.

“Back there,” Guerra said of Guatemala, “they kill at the drop of a hat.”

Left: Passengers embark on the U.S. side of the last hand-pulled ferry at Los Ebanos, Texas on the Mexico-U.S. border in 2008. Photo by Christa Cameron/Reuters