Are Americans a stingy lot of people?

Editor’s Note: The Ice Bucket Challenge was the height of American cool this summer. (If you need proof, even the NewsHour’s Gwen Ifill and Judy Woodruff did it.) At the end of August, the campaign had raised more than $100 million for the ALS Association.

Through social media videos, donors made public displays of doing something daring. No, not dumping chilly water on their heads, but giving away money, voluntarily.

Why daring? Because almost half of all Americans do not give money away — to any cause. Most Americans — six out of seven — do not even give away 2 percent of their income.

That’s an example of what Notre Dame researchers call the “paradox of generosity.” Giving away money makes people feel good about themselves. (And, of course, in the case of the Ice Bucket Challenge, letting people know that you’ve done so on Facebook is a big part of the gratification.) And yet, many Americans just aren’t very generous with their money.

Why? That’s one question that the University of Notre Dame’s Science of Generosity Initiative is trying to understand. Building on five years of research, which included a survey of more than 2,000 Americans and select in-depth interviews across the country, Notre Dame sociologist Christian Smith and Ph.D. candidate Hilary Davidson take a closer look at the paradox of generosity in their book of the same name, which goes on sale this week.

They find a consistent link between generosity and higher quality of life: people who give, whether it’s financial or not, are happier and healthier. But the connection between compassion and welfare is hardly news to Making Sen$e readers. Visiting the University of California Berkeley’s Greater Good Science Center last year, we learned that there’s a point at which more wealth doesn’t make people happier. Gratitude, though, does.

Perhaps surprisingly, Smith and Davidson found that making more money doesn’t mean that you give away a higher proportion of it. Making Sen$e has covered different, but related findings from the Greater Good Science Center about wealth and behavior. As our segment “Money on the Mind,” below, explains, those who feel they have less tend to give more.

The topic of Smith and Davidson’s book, published by Oxford University Press, is categorized as “religion” — certainly not a regular feature on Making Sen$e — but their research contributes valuable data about which Americans gives and how much.

Keep reading to learn about Americans’ financial giving practices, adapted from the third chapter of their book, and in the days to come, look for more of their research on which Americans engage in non-financial giving.

Everyone who’s ever given a personally selected gift knows the primary paradox of generosity — that by giving we in fact receive. But there is a related second paradox worth noting. A very large number of Americans, despite (we presume) wanting to enjoy happy, healthy, purposeful lives, fail to practice the kinds of generosity that actually tend to lead to happiness, health, and purpose in life.

Something gets in their way. Like children whose fingers are caught in “Chinese hand-cuffs,” they pull hard to take care of themselves, but that simply keeps them stuck. But if these people relaxed and freely let go of some of their resources instead, the evidence suggests, they could escape the trap of ungenerous living.

When it comes to generosity with money, time, skills and relationships, we know that relaxing, letting go, and giving away is not often automatic or easy. This is especially true in American culture, which from all sides constantly pounds home messages of scarcity, discontent, insecurity and acquisition. These messages may serve to grow the consumer economy, but they are often not good for the consumers.

So, given the omnipresence of these cultural messages, real generosity requires learning something different, something that may not feel natural for many people. It often requires real personal change. A better understanding of how generosity works can aid that learning and change.

But just how generous or ungenerous are Americans? And in what ways are we generous or not?

What we see is that many Americans are indeed generous. Then again, many others are not. Sizeable proportions of Americans give away money, volunteer, go out of their way to take care of their families, friends, and neighbors, give blood, are organ donors, and more. At the same time, large proportions of Americans do not volunteer in any capacity. We’ll first take a closer look at financial giving, drawing on evidence from the Science of Generosity Survey.

Who gives financially, of course, depends on just how much of our finances we’re talking about giving away.

About 3 percent of adult Americans give away 10 percent or more of their income. This number is calculated by dividing the amount respondents reported giving away by their reported total salary.

What does this tell us? If we think that giving away 10 percent of one’s income is an exceptional feat, then this number is a bit impressive. But if we think it is a good baseline measure of true financial generosity, then the vast majority of Americans are falling below the bar. For our purposes, suffice it to say that giving 10 percent of one’s income is a good marker associated with enjoying better health, happiness, and purpose in life.

Viewed this way, though, the vast majority of Americans (97 percent) are forfeiting the chance to enhance their well-being by practicing real generosity with their money.

“The vast majority of Americans (97 percent) are forfeiting the chance to enhance their well-being by practicing real generosity with their money.”

We think the true number is closer to 3 than to 8 percent, however, for this reason: Estimates for larger amounts tend to ask respondents the percentage of their incomes that they give, which people typically overestimate for various reasons, including social-desirability bias. But our estimate of 3 percent is based upon a sum total of giving carefully calculated by asking respondents to report specific dollar amounts for 36 possible different giving categories, which tends to produce more accurate results, and comparing that to their reported incomes.

We also must remember that these survey data were collected in the midst of the Great Recession, which began in 2008 and is only now showing signs of abating. So our numbers, some of which are a bit lower than those of previous studies, should be understood as representing generosity at a time of relative economic stress for many Americans.

What do Americans think about their own giving? When asked to calculate these numbers in their own minds, Americans typically report much higher percentages of giving.

In response to a straightforward survey question that directly asked respondents whether (by their own reckoning) they do or do not give away 10 percent of their income, 20 percent of Americans answered yes. Clearly, some people (about 17 percent of Americans) tend to be much more “generous” with themselves when it comes to thinking about how much money they give away, compared to what seems to be real when it is directly calculated.

This tells us a few things. First, a decent proportion of Americans believe that giving money away is a good, socially desirable thing, and so give themselves the benefit of the doubt when it comes to thinking about how much they do give away.

Second, a proportion of Americans simply seem to be not very good at estimating how much money they are giving away. This does not surprise us at all, based on what we have learned in our interviews with Americans about their generosity: the amount an individual reported on the survey was sometimes different than the amount reported in-person in the interview. There were also discrepancies within households with one partner claiming that the family gives more or less than the other.

We can assess Americans’ financial generosity by lowering the standard and seeing what percentage of Americans do not give even 2 percent or more of their income. At least 86.2 percent give away less than 2 percent of their income. This, again, is calculated by dividing the sum of the amount of money they say they give away in 36 possible categories of types of giving by their reported annual income — which we have reason to believe produces accurate results. Assuming so, we see that most Americans, about six out of seven, do not give away even 2 percent of their income. That suggests a relatively stingy lot of people, financially speaking — though, again, we should keep in mind the effects of the Great Recession on these numbers. 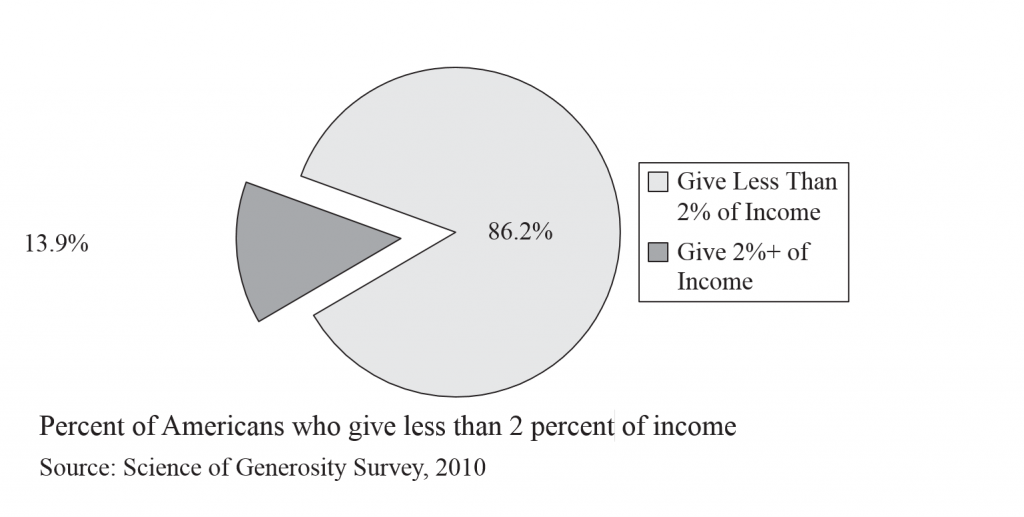 Looking at the percentage of Americans who give certain percentages of their total incomes, we see that nearly half of us (44.8 percent) admit to not giving away a single dollar.

“Making more money in America is not associated with giving money more generously.”

Some readers might assume that the percent of income that Americans give rises gradually with increases in their actual income. It stands to reason that the more money people make, the greater the percentage of it they should be able to give away without cutting too much into their own basic needs and wants. But this is not the case. Making more money in America is not associated with giving money more generously.

In fact, the percentage given actually drops slightly, from 2.2 to 1.1 percent of income given away when moving from the lowest income category (less than $12,499) to the highest ($90,000). Earning a higher income in the U.S., in other words, does not translate into giving larger proportions of that income away. 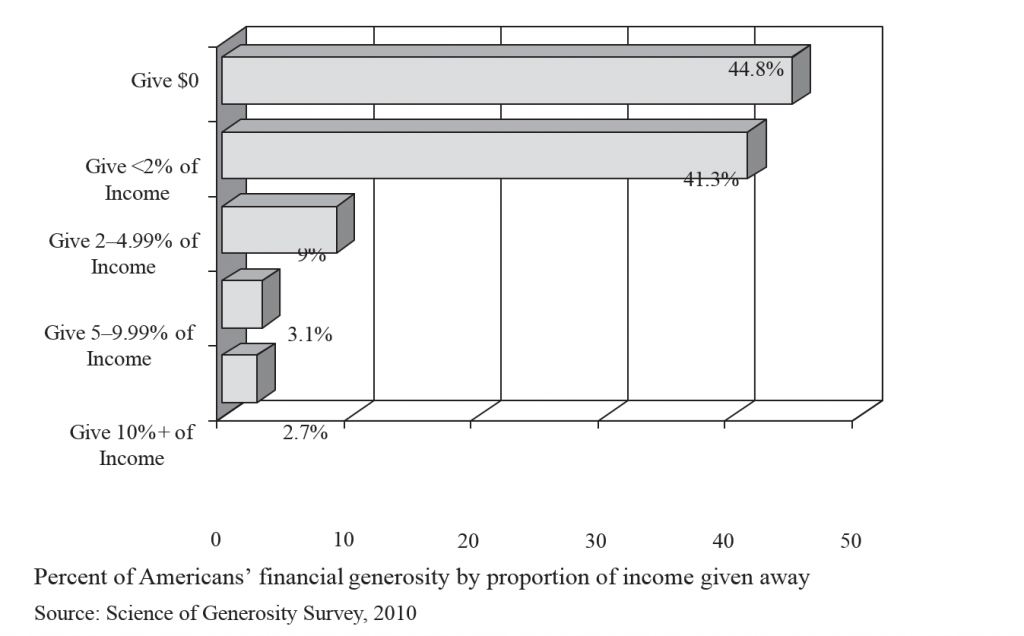 For example, adding together the money given by the 20 percent of the most generous Americans (the four 5-percentiles on the right) shows us that they give 86 percent of all of the money voluntarily given away in the U.S. If you have ever heard of the “80/20 Rule” when it comes to voluntary financial giving, the actual rule is in fact more like the “86/20 Rule.”

In short, a quite small group of Americans gives away the vast majority of the money that is donated voluntarily in the U.S. If the top 10 percent of most generous Americans were to stop giving money, the entire sector of society and the economy based on voluntary financial giving would simply collapse. In other words, there is a huge amount of room for growth in financial generosity for many Americans.

Left: Giving makes us feel good, but not enough Americans do it. Photo by Flickr user Kymberly Janisch.