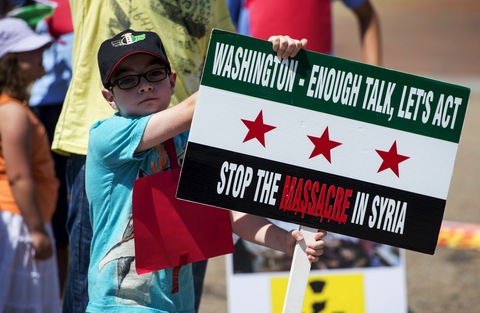 Dozens of protesters rally in front of the White House last Sunday to call on President Barack Obama to act on the reports of chemical weapons use by Syrian President Bashar Al-Assad in the ongoing civil war in Syria. Photo by Bill Clark/Getty Images.

As the U.S. weighs a response to Syria, recent polling has shown Americans largely opposed to military action and few paying close attention to the ongoing conflict. But that could change with the Syrian government’s use of what the Obama administration says were chemical weapons.

No polling has been conducted on the public’s views of Syria since that government was accused of using chemical weapons. But the trend lines against military action have been clear:

Even with that consensus, a Washington Post/ABC News poll in December suggested that the government’s use of chemical weapons against its own people could change public opinion. In that poll, just 17 percent thought the U.S. military should get involved in the conflict as it was at the time, but 63 percent said they would support military intervention if the Syrian government used chemical weapons against its people.

The Pew Research Center has tracked public attention to news about the conflict in Syria since May 2011, and has consistently found most Americans are tuned out. Each time they’ve asked, a majority said they were not following closely.

While the fighting in Syria has stretched on and escalated, Americans’ views on the U.S. duty to act have changed little. Several news organizations have asked the same question about Syria, and a February 2012 CNN/ORC International poll was the first, finding just 25 percent thought the U.S. had a duty to act. That sense of responsibility peaked in May 2012 at 33 percent.

Since the end of the Cold War, Americans have felt an obligation to get involved in just a few conflicts that did not directly involve the U.S. – about half said the nation had a duty to intervene in Somalia in 1993 and Darfur in the mid-2000s, and most said the U.S. had a responsibility to act in Kosovo in 1999.

The pattern with Syria is similar to the public’s long-standing skepticism about U.S. involvement in the Bosnian war in the mid-1990s. CBS News and The New York Times tracked public opinion on the fighting between Serbs and Bosnians in the former Yugoslavia, and from 1993 through 1995, regardless of the intensity of the conflict, those who felt no responsibility to act outnumbered those who did.